Singapore banks’ 2Q19 results performed within our estimates and beat consensus estimates by 4-10%. Net interest income was strong across all three banks due to loan repricing with higher interest rates and the release of pricier fixed deposits. Non-interest income rebounded this quarter for DBS and UOB while OCBC’s Great Eastern insurance contributions dragged its earnings.

DBS expects one more rate cut by end 2019 and 1bps NIM contraction in 3Q19. UOB expects one more Fed rate cut as well but does not expect any impact this year, and implied 1bps NIM expansion in 3Q19. OCBC expects two more rate cuts this year and 3Q19 NIM to rise slightly at 1bps. As a whole, the Singapore banks are bracing for interest rate cut impacts by releasing pricier fixed deposits and repricing their loans.

New NPA formation for 2Q19 was elevated QoQ. DBS’ new NPA formation rose 154% QoQ to $277mn mainly due to an Indonesian exposure. OCBC recorded new NPA of $390mn (+31% QoQ) due to loan restructurings for its CPO portfolio in Indonesia. UOB’s new NPA formation was contributed by a US-related real estate exposure. However, NPL ratio remained stable at 1.5% for all three banks.

In the event of a further slowdown in global economic growth, the impact of interest rate cuts should be offset by growth in fee income and other non-interest income from areas such as deals, bonds refinancing and wealth management. All three banks recorded strong growth in wealth management income as well as higher AUMs. We believe growth in AUM (larger base for recurring fees) provides greater diversification from volatile revenue streams.

We prefer UOB because it has the least exposure to Greater China and Hong Kong, and its attractiveness is supported by its defensive traits and steady earnings with high visibility. 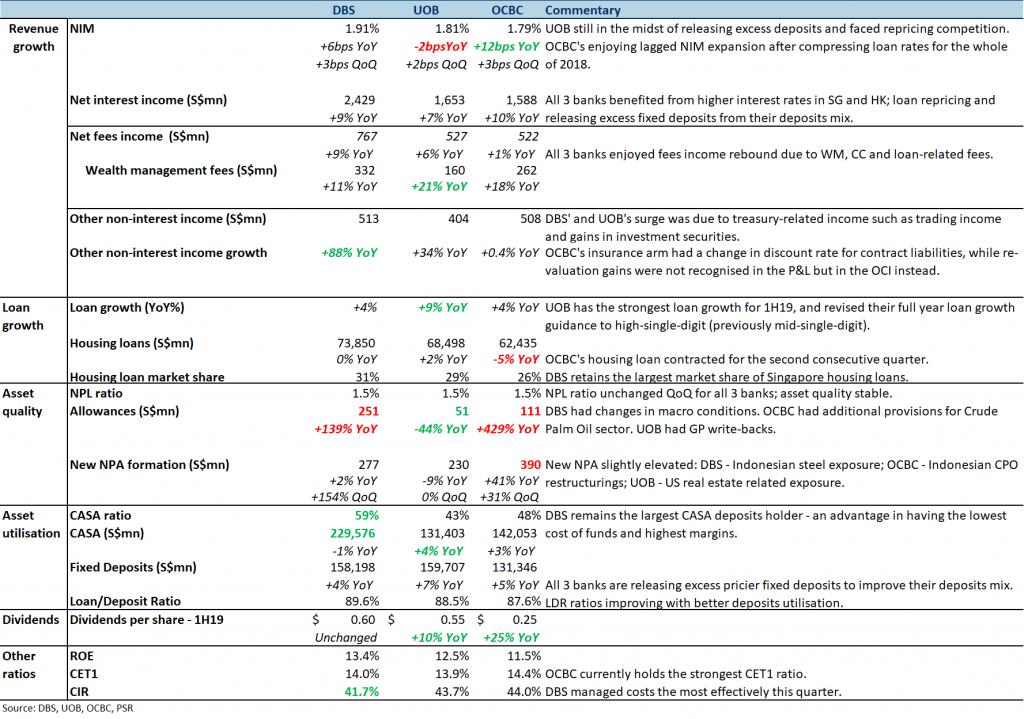 Latest statistics from MAS reported sluggish loan growth of 2.1% YoY for June. Business loans growth of 3.8% YoY offset some of the contraction in consumer loans growth of 0.6% (Figure 1). Building & construction loans (+10.5% YoY) remained robust due to the progressive drawdown of loans from existing projects in the pipeline. Consumer loans (Figure 1) contracted for the third consecutive month, dragged by persistent weakness in housing loans contraction of 0.4% YoY due to property cooling measures. We expect loans growth for the Singapore banks to slow to 4-5% for FY19e (2018: +7 to +11%) due to headwinds from property cooling measures and slowing global economic growth.

Figure 1: Housing loans growth has been slowing since the peak in May 2018 due to property cooling measures. 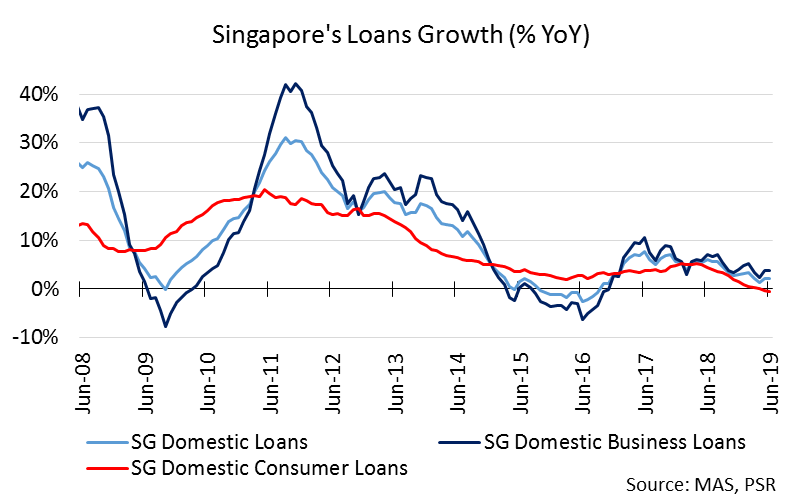 Deposits – CASA stopped contracting for the first time in 9 months

CASA registered its first growth (+1.2% YoY) in 9 months while fixed deposits sustained its decade high growth (+21.8% YoY), outpacing overall deposits growth of 8.8% YoY as banks competed for fixed deposits, lifting 3m SIBOR to the 2% level, a level last seen during the previous Fed rate hike cycle between 2004-2006. With the expectations of lower interest rates, investors’ demand for fixed deposits are waning and we should see a recovering trend in CASA balances moving forward.

Higher cost of funding is typical when there is a higher proportion of pricier fixed deposits in the mix, making it a challenge for banks to achieve NIM expansion. However, we expect competition for fixed deposits to taper off in the 2H19 and funding pressure to ease since we expect further rate cuts in 2019. 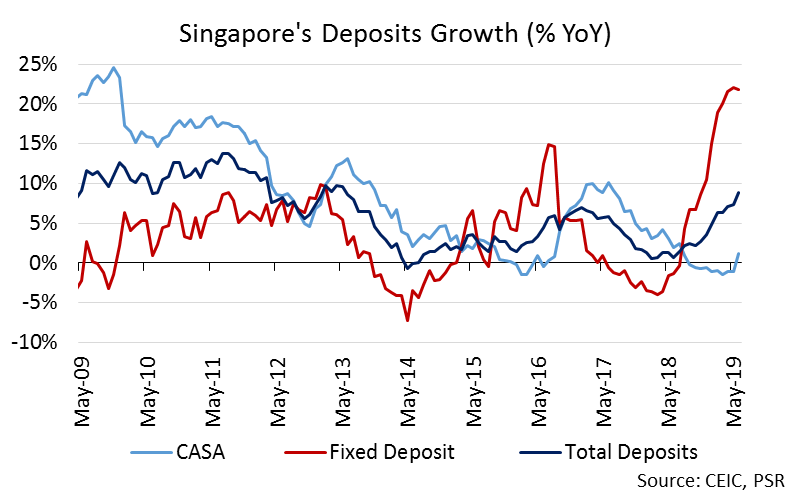 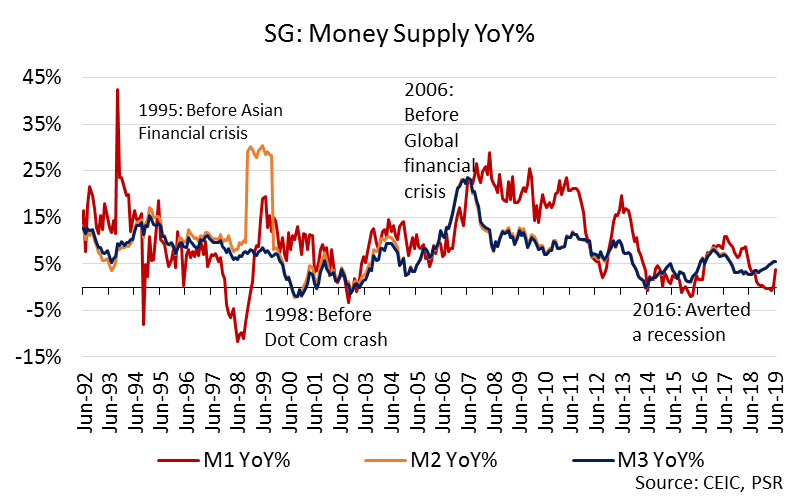 Meanwhile, the savings rate in Singapore remained unchanged at 0.16% (Figure 4). However, we believe the pause in interest rate hikes limits the upside for NIM expansion. As we reach the end of the interest rate cycle, NIM should be softer on a quarterly basis in 2H19. We still expect the banks to deliver full-year NIM improvements due to the lagged effect of loan repricing, albeit at a lower magnitude of around 4 bps in FY19e.

Figure 4: Due to expectations of one more fed rate cut in 2019, NIM should be softer in 2H19 as interest rates fall. 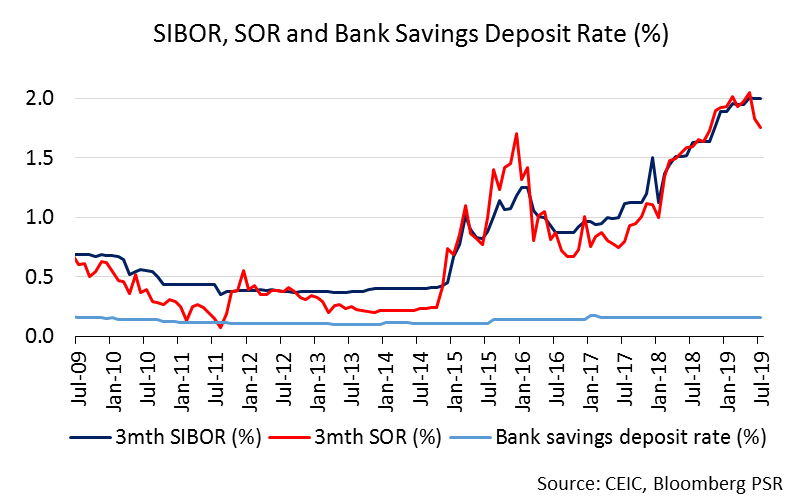 Figure 5: In a rising interest rate environment, there is usually a trend of CASA deposits migrating to fixed deposits. 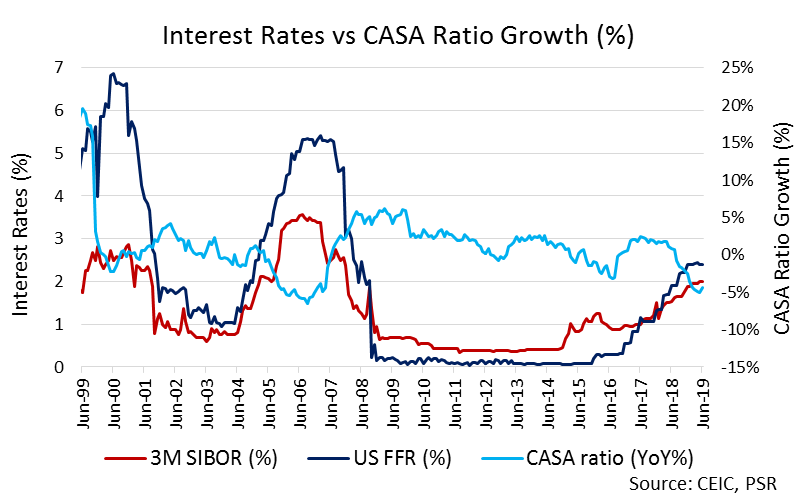 With increased volatility due to trade uncertainties and geopolitical tensions, investors tend to hedge more and SGX’s derivative business is expected to benefit from heightened volatility. SGX’s derivative products capture global flows and not as reliant on local liquidity as the securities business. With the resurgence of trade war turmoil, we saw SGX’s DDAV (Derivatives daily average volume) spike 54% YoY in May.

On the regulatory overhand from Nifty 50 futures contract, SGX and the National Stock Exchange of India (NSE) have obtained regulatory support for a joint proposal to have trades in this product to be executed in Gujarat International Financial Services Centre, or GIFT City. The acceptance of the joint proposal creates visibility and reassurance in the growth in one of SGX’s most popular derivatives contract.

Figure 6: The VIX index fell during Jan-Apr when markets were recovering and peaked in May due to the resurgence of US-China trade tensions. 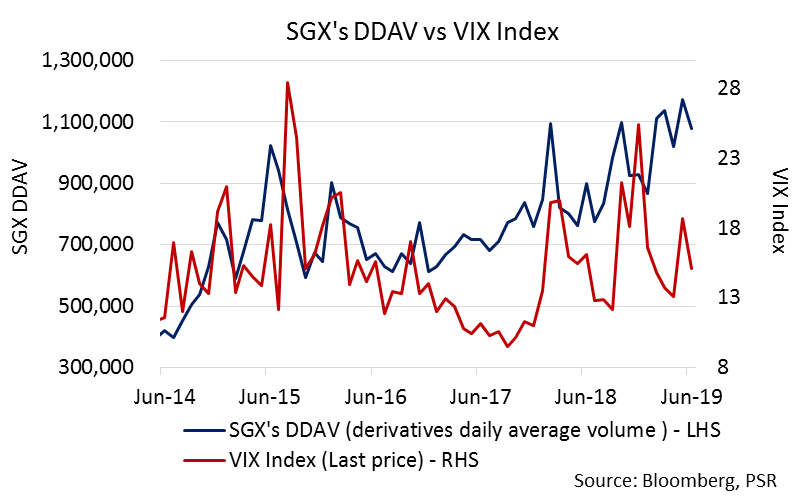 Figure 7: SGX’s derivatives business doubled in 5 years and should support earnings when its securities business is slowing. 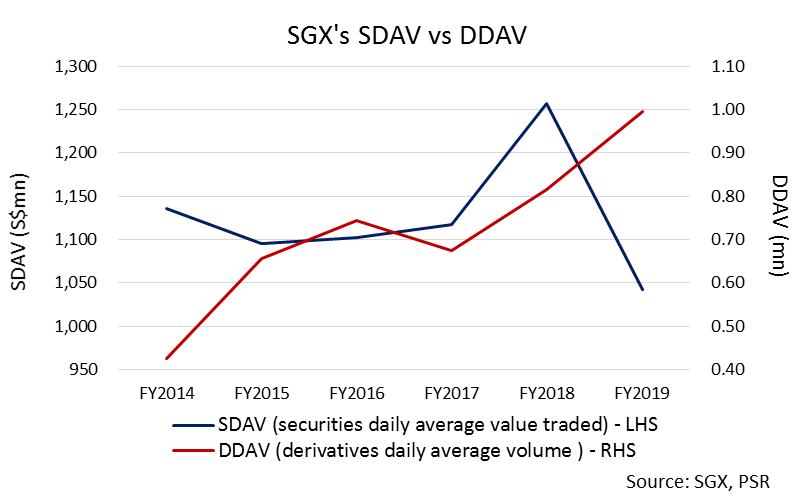 Figure 8: A rising HIBOR benefited banks with larger exposure to Hong Kong (such as DBS and OCBC). 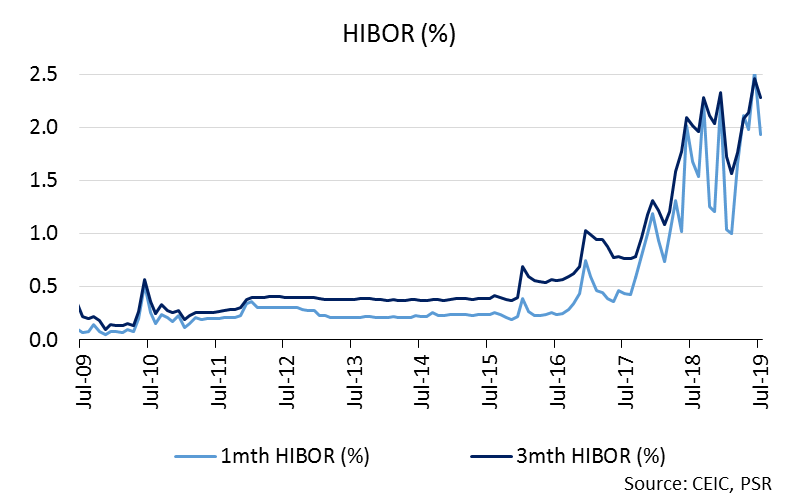 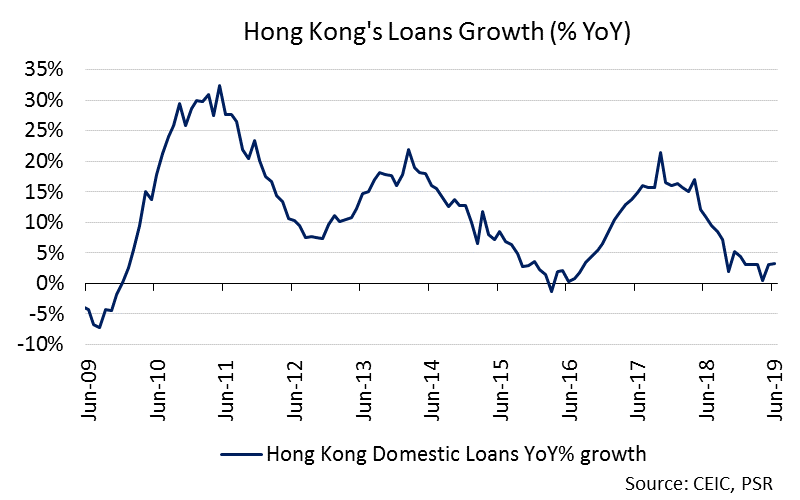 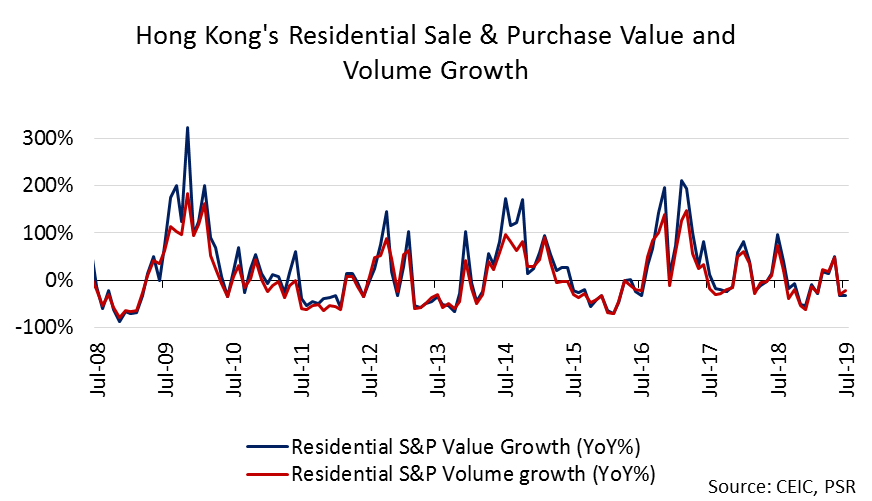 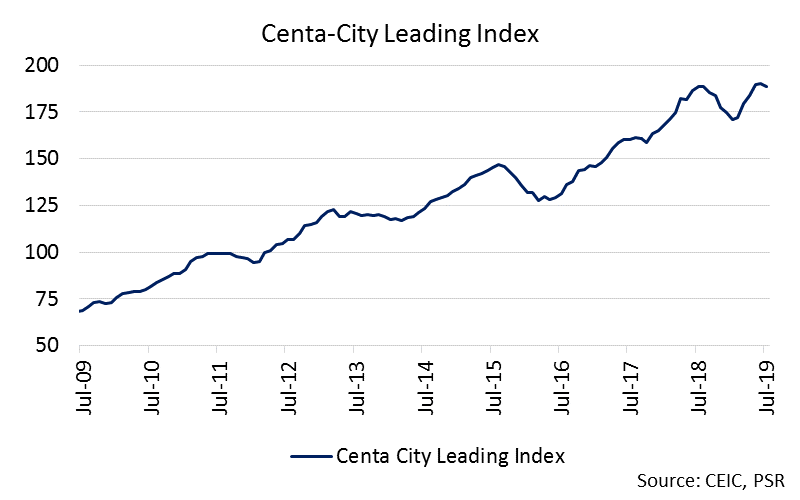 Maintain the Singapore Banking Sector at Overweight. While the trade war affects investor sentiments in the near term, we believe the banks’ healthy fundamentals remain intact to withstand risks and deliver growth.

UOB remains as our top pick because of its exposure to trade war effects being relatively muted as compared to its peers. We are attracted to its defensive traits and steady earnings with high visibility. As of 2Q19, UOB’s profit before tax arising from Greater China and Hong Kong loans is 13% (DBS: 27% and OCBC: 20%) (Figure 13). 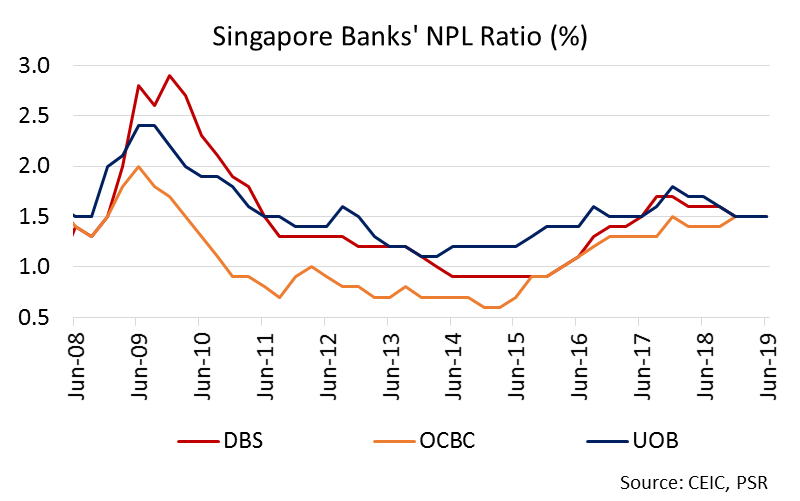 Figure 13: UOB is the least exposed to Greater China and Hong Kong. 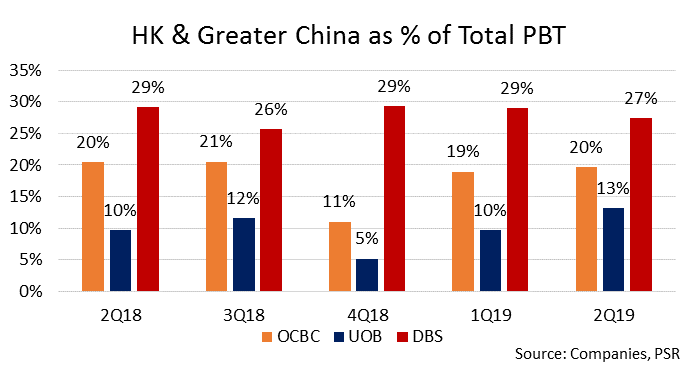 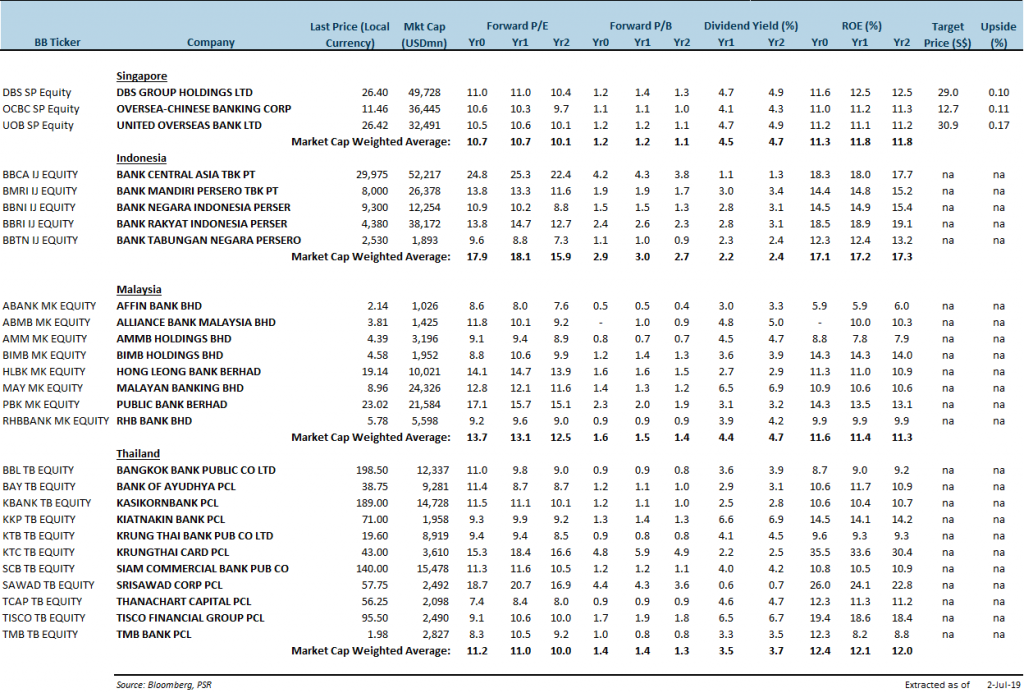 Figure 15: By Geography – UOB is the least exposed to Greater China and Hong Kong.

Figure 16: Loans – UOB is the least exposed to Greater China and Hong Kong. 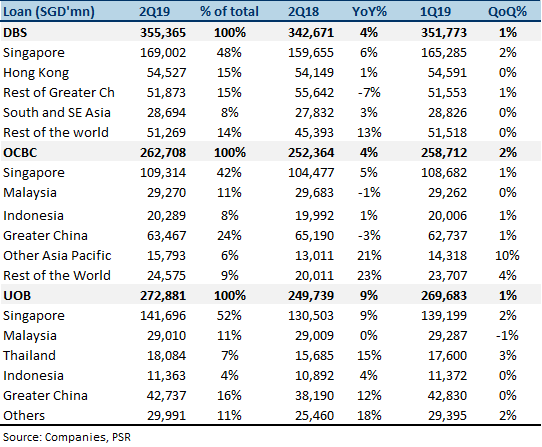 Figure 17: Deposits – DBS has the largest CASA base which gave it its NIM advantage. 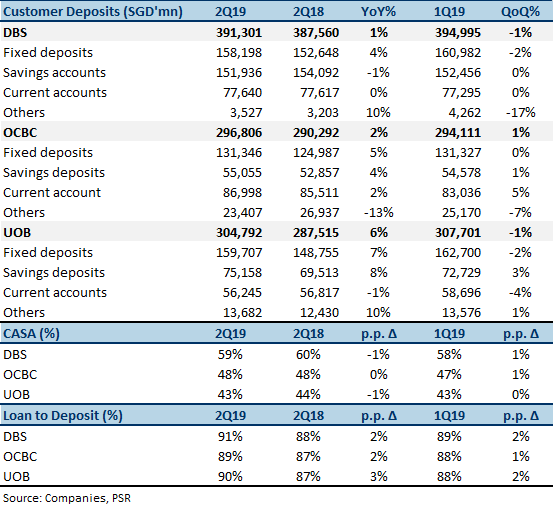