Sinarmas Land’s subsidiary, Kota Deltamas (DMAS), recorded IDR559 billion (1Q16: IDR66 billion) in marketing sales which was mainly contributed from the sale of industrial land, meeting 37% of its full-year marketing sales target of IDR1,506 billion. Sinarmas Land via its subsidiary, BSDE, recorded IDR1.6 trillion of marketing sales in 1Q17. The amount represented a 33% growth year-on-year which was mainly due to booking of the remaining land plots that were sold previously. Contributions from the sale of land represented 53% of total revenue contributed by BSDE. Out of the remaining 47%, residential pre-sales only met 12% of its full year target, however, the Group expects demand to accelerate moving forward. This is on the back of improving sentiments in the economic landscape which could fuel demand for industrial land moving forward.

During the quarter, the Group has soft launched (c.40% of development) Phase 1 of Nuvasa Bay in Batam, The Nove, which consists mainly of condominium units. The development project is a high-end integrated residential and mixed-use development that will be launched in several launches. The Group has sold 65% of units that were soft launched where buyer profiles are mostly Indonesians with a small portion of Singaporeans. The strong take up rate in the soft launch indicates demand for properties in Batam and is expected given the lack of higher end developments in the city. We estimate that The Nove will add S$2.6 cents to our RNAV estimates when completely sold.

After the introduction of various rounds of economic stimulus packages by the Indonesian Government, private consumption and investment growth is finally showing signs of recovery on the back of a stronger economic landscape which will subsequently benefit real estate activities in Indonesia. We maintain our BUY rating with an upgraded TP of $0.73 based on our FY17 RNAV estimates. 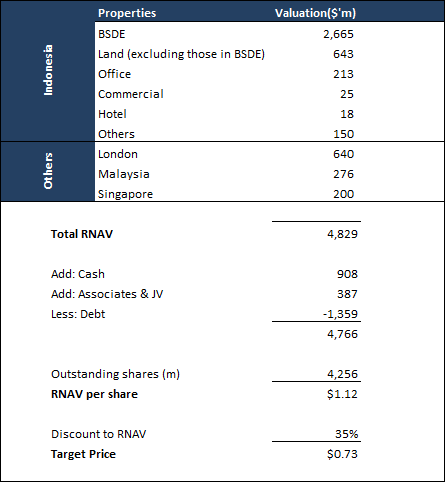