SML recorded IDR6.3 trillion worth of development sales in FY16 which represented 91% of the Group’s estimates. The shortfall in development sales was largely the result of new launches that were delayed as the Group focused its efforts to take advantage of the Tax Amnesty Programme in Indonesia and market existing unsold units. Moving forward In FY17, SML has targeted a 14% gain in development sales to IDR7.2 trillion with an increase in contribution from the commercial segment. The commercial segment is expected to contribute IDR2.9 trillion (71% of total development sales) in FY17 amid the launch of two mixed developments with office, residential and commercial amenities. These two developments, Southgate Residence and Klaska Surabaya, are located in South Jakarta and Surabaya respectively. We are expecting positive sales traction at Southgate Residence as demand for units in South Jakarta is expected to remain strong where asking prices grew c.4% year-on-year, the highest compared to the other regions in Jakarta. Southgate Residence will also house a build-to-suit shopping mall for Aeon Mall which is likely to boost the take-up rate of units in the development when launched.

The Group sold 52.9 hectares of industrial and commercial land and recording a sales value of IDR1,076 billion in Kota Deltamas in FY16. SML is expecting 60 hectares of land sales while targeting a sales value of IDR1.5 trillion in FY17. The targeted sales value represents a 13% increase in land sales compared to FY16. The estimate also translates to a 19% expansion in average selling prices of all land types to IDR25 billion per hectare, which is mainly attributable to a larger proportion of sales being derived from commercial and residential land sales. As companies continue to relocate their plants and expand into other parts of Jakarta, we view that demand for industrial land is likely to be fuelled by this ongoing trend. Additionally, two automotive manufacturers, SAIC GM Wuling and Mitsubishi Motors, are slated to begin operations this year which could potentially create 15,000 jobs in the vicinity. We expect the demand for land designated for commercial and residential usage to be boosted by an increasing working population in the area.

We are upbeat that both development and land sales are expected to accelerate for SML. This is mainly due to various rounds of economic stimulus packages that have yet to show impact but are likely to boost private consumption and investment growth, and subsequently the Indonesia’s real estate market in 2017. We maintain our BUY rating with an upgraded TP of $0.73 based on our FY17 RNAV estimates. 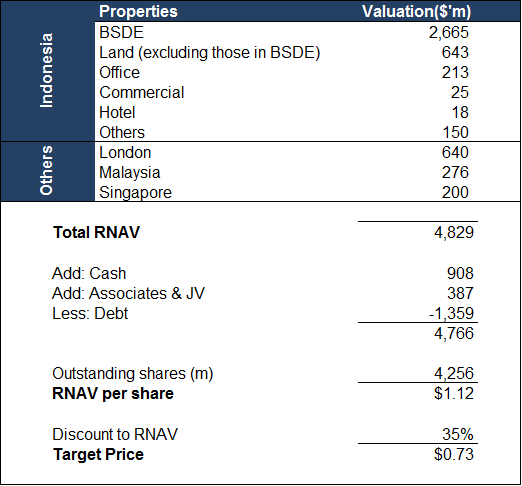