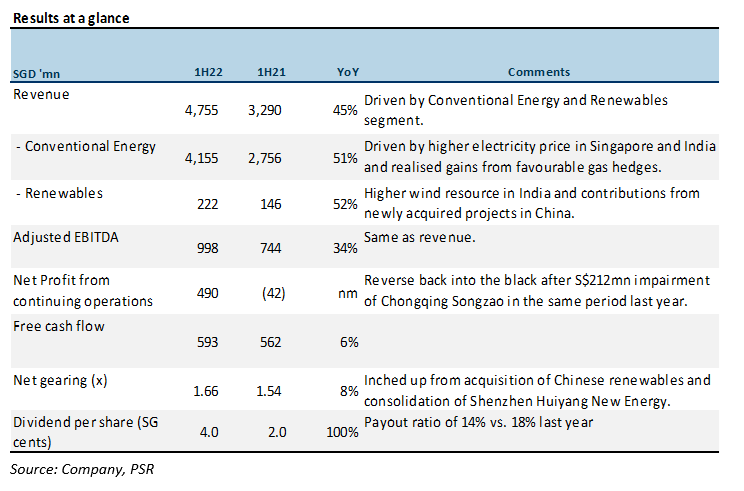 + 1H22 profit ahead of our expectations, at 99% of FY22e as Conventional Energy and Renewable Energy beat. The surge in power prices and margins in Singapore and India drove Conventional Energy beat for the period (+115% YoY). Average USEP prices for 1H22 surged to S$324/MWh, higher than the S$295/MWh average in 2H21 and spark spreads have increased to $6.30/MWh YTD (Figure 1) as average USEP prices have moved ahead of HSFO in the last nine months. A one-off hedging gain of $92mn from gas hedges during the period also lifted profits, but we do not expect this to recur in 2H22. Contributions from newly acquired projects in 1H22, SDIC New Energy and Shenzhen Huiyang in China lifted Renewables profit.

+ Battery segment as key growth driver in medium- to long-term. The management re-affirmed its battery business as a key growth driver for the company, in line with its strategic plan announced at its Analyst Day in 2021. It currently has 120MW of energy storage in the UK which holds an important role in helping to stabilise the grid as the UK continues its pivot towards renewables.

SCI is currently in the process of building a 360MW battery facility at Teesside, UK. When completed, it will boost the Group’s capacity to take advantage of more volatile, uncertain markets with the rise of intermittent renewables.

+ Renewables profit at 74% of FY22e, lifted by better performance in key markets. Better wind resources in India and higher spot prices for its solar business in Singapore lifted profits (+217% YoY). SCI’s gross renewables capacity in operation and under development globally now stands at 7.1GW in 1H22 from 6.1GW as at end-2021. Its acquisition of a 98% stake in HYNE assets will contribute ~S$50mn per year to its profits.

– Lower land sales dragged Integrated Urban Solutions business, offset by higher ASPs. Higher contribution from Wilton 11 in the UK was offset by higher operating costs for the waste business in Singapore. Despite lower land sales, the Group remain confident of hitting its target of 500ha of land sales by FY25 as it plans the development of the 481-hectare Quang Tri Industrial Park in Vietnam and the 1,000ha of VSIP Binh Duong III.

Management continued to guide for the Conventional Energy segment to perform well in the second half of this year as global energy markets remain firm. Despite this, we expect energy markets to moderate slightly in 2H22. USEP prices in July were ~9% lower than 1H22’s average. We expect some normalisation in FY23e.

Planned maintenance shutdowns for Sembcorp Biomass Power Station in the UK (~6 weeks) and India SEIL Project 2 (~45 days) in 2H22 will also put a drag on Conventional Energy earnings in 2H22.

We also modelled in a full half-year contribution from the newly acquired SDIC New Energy and Shenzhen Huiyang in China for its Renewables segment.