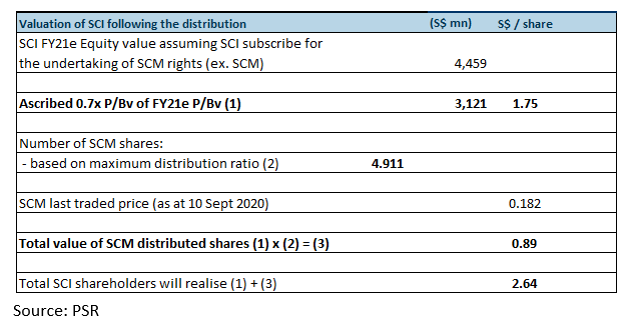 Following the issue of 10,462,690,870 SCM rights shares to entitled SCI shareholders on 11 September, the proposed distribution and demerger has been completed. Entitled SCI shareholders will have received their entitlement of 4.911 SCM shares for every 1 SCI share held, amounting to approximately S$0.89 (4.911 x S$0.182). We arrived at this by taking the number of SCM shares distributed for every 1 SCI shares held and multiplied this by the closing price of the SCM shares as at 10 September 2020 of S$0.182, which is the date before the distribution to SCI holders.

We are positive on the Group’s outlook. Following the deconsolidation of SCM, we think SCI will see a potential positive re-rating as the Group’s operating metrics improve in Fy21e from improving energy demand.

Maintain BUY with an unchanged target price of S$1.75

We maintained our BUY recommendation on SCI following the distribution-in-specie of the capital of SCM to entitled SCI shareholders. Our target price of S$1.75 for standalone SCI (ex. SCM) is pegged to a P/BV of 0.7x FY21e, which is a slight discount to their 10-year historical average equity value (ex. SCM). We expect SCI to see improved operating metrics with the Group expected to generate positive operating CF of $854mn for FY21e and return on equity of 7.6% for FY21e.