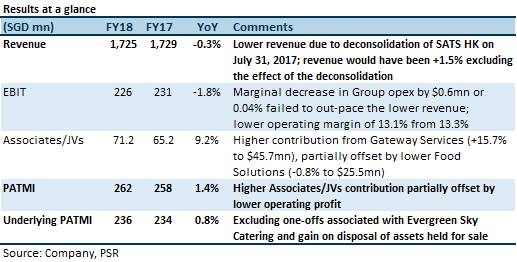 + Gateway Services (GS) at the operating level and associate/JV level benefitted from higher cargo volumes and flights handled. GS revenue was 2.9% higher YoY and GS profit from associates/JVs was 15.7% higher YoY. Notably, the cargo business has high operating leverage; thus incremental revenue would have largely flowed to the bottom line.

– 7.7% YoY lower revenue for TFK Corp due to lower customer volume. Underlying reason for the lower food volume was Vietnam Airline had switched over to the ANA kitchen following ANA’s acquisition of a minority stake in the airline; and Delta Air Lines had reduced flights into Tokyo. TFK revenue contribution was also negatively impacted by JPY which was on average 4.3% weaker than SGD during FY18. (Refer to Figure 1.)

– Weaker Food Solutions (FS) at both the operating level and associate/JV level. Management commented that pricing pressure in FS is expected to be ongoing, so the focus is to build scale to offset pricing pressure.

– 24.7% YoY higher licence fees, due to cessation of rebates at Changi Airport. However, the higher licence fees was offset by lower staff costs, and company premise and utilities expenses as a result of the deconsolidation of SATS HK. Resulting opex was 0.04% lower YoY.

The outlook is positive. With investments in new ventures and partnerships, we expect inorganic growth at the associate/JV level. As such, we expect associates/JVs to contribute an increasing proportion to Group earnings. The Group continues to grow its footprint across Asia and is leveraging on technology to improve productivity as volumes increase.

We like the stock for its regional expansion story and pipeline of growth initiatives. Our target price gives an implied FY19e forward P/E multiple of 26.4 times.