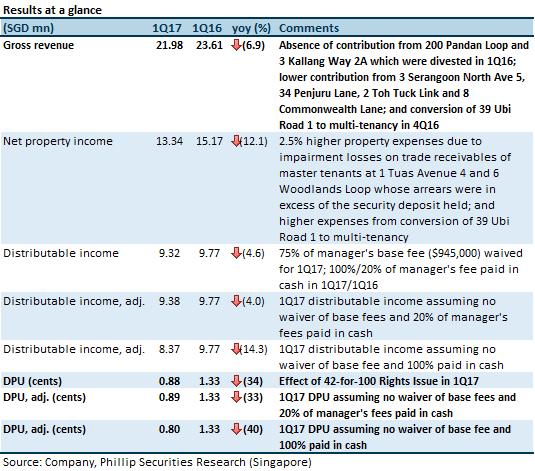 Historical distribution per unit (DPU) for 1Q FY16 was 1.33 cents and not the headline 1.16 cents, as presented by the manager. 1Q FY16 DPU “has been restated to reflect the effect of the bonus element in the Rights Issue launched on 20 December 2016”, which presents a 24% lower year-on-year (y-o-y) DPU. DPU is actually 34% lower y-o-y, even with the one-off waiver of 75% of the base fee by the manager. Following the failure at the recent Annual General Meeting (AGM) to secure a General Mandate to issue units, all manager’s fees for FY17 will be paid in cash. 1Q FY17 DPU would have been marginally higher at 0.89 cents instead of 0.88 cents, had the manager been able to apply the same payment formula as 1Q FY16.

The lease expiries by net leasable area (NLA) comprise multi-tenanted leases, non-Sponsor master leases and Sponsor-related master leases distributed by 13.7%, 5.3%, and 17.3% respectively. The Sponsor has indicated its intention to renew the three master leases and the manager is in discussions with the remaining two third-party tenants for renewal of their master lease.

Mr Kevin Xayaraj, Chief Executive Officer (CEO) and Executive Director (ED) of the manager has tendered his resignation and his last day of service will be on 31 December 2017 or earlier. We believe this could be a prelude to further restructuring of the Board and key management is possible as well, much like what happened over at Cambridge Industrial Trust (CIT) and IREIT Global (IREIT), when the managers were acquired; and even a merger. (Refer to our Sector Report for further details.) In our previous Trading Note, we offered a few possible scenarios with e-Shang Redwood Limited (ESR) coming into the fray as a substantial Unitholder with a 5.01% stake in the REIT – most of which did not materialise. We now think the most likely outcome is for ESR to take a stake in the incumbent manager as part of the ongoing Strategic Review.

In our previous Trading Note, we estimated net asset value per unit (NAV/unit) to be $0.60. We also estimated gearing to be significantly lowed to ~36% following the Rights Issue and repayment of $60.0 million of short-term debt from the Rights Issue proceeds. Our target price remains unchanged as both estimates have been proved accurate in the 1Q FY17 financial results ($0.60 NAV/unit; 36.1% gearing).

Our event-driven thesis remains intact and we reiterate our unchanged target price of $0.54 based on 0.9x price to net asset value (P/NAV). Our bear case scenario of 0.8x P/NAV, or $0.48 had already materialised; and our bull case scenario remains at 1.0x P/NAV, or $0.60.