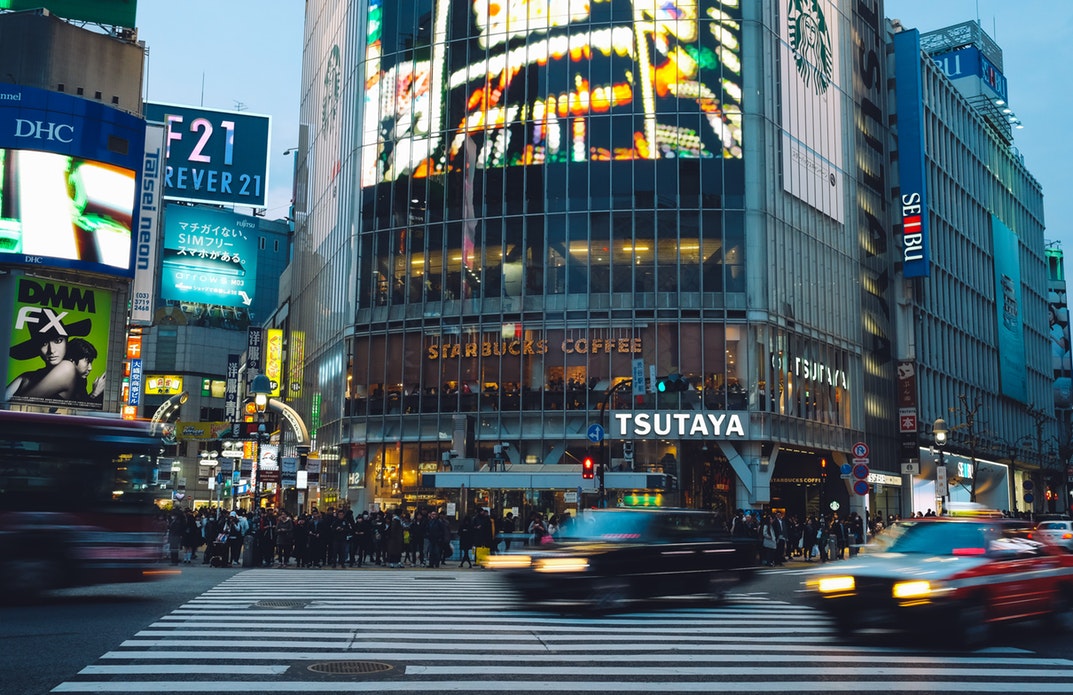 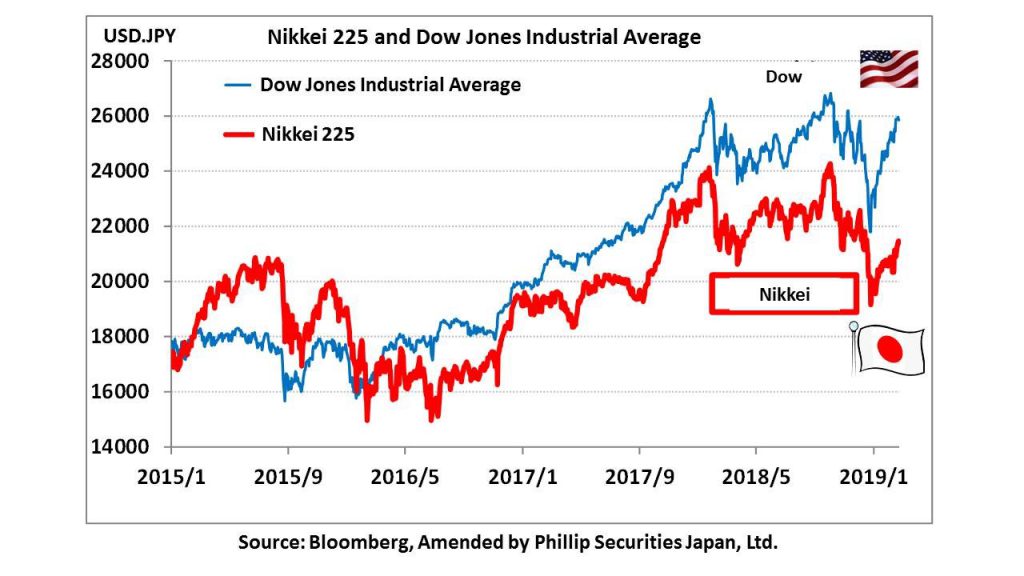 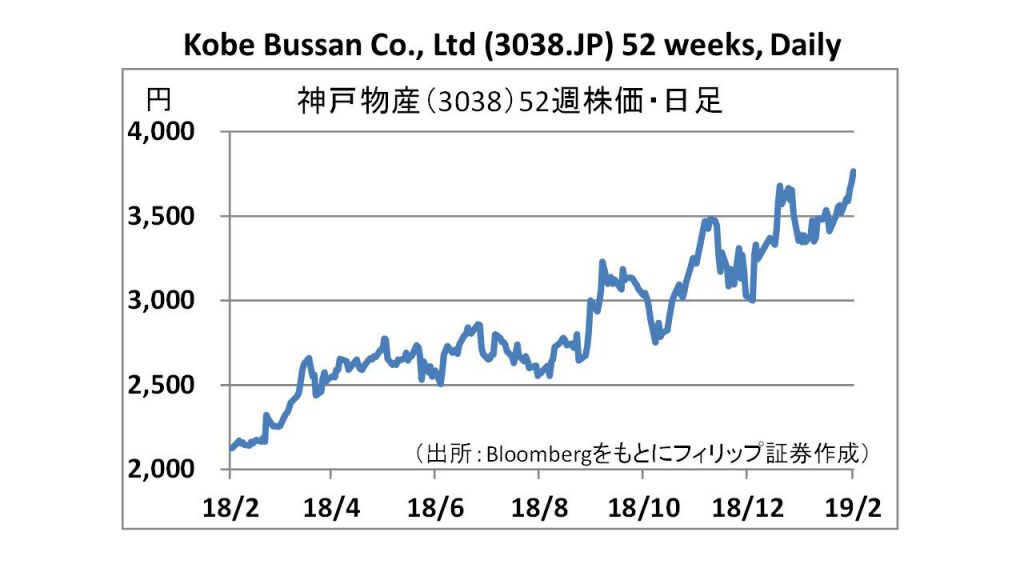 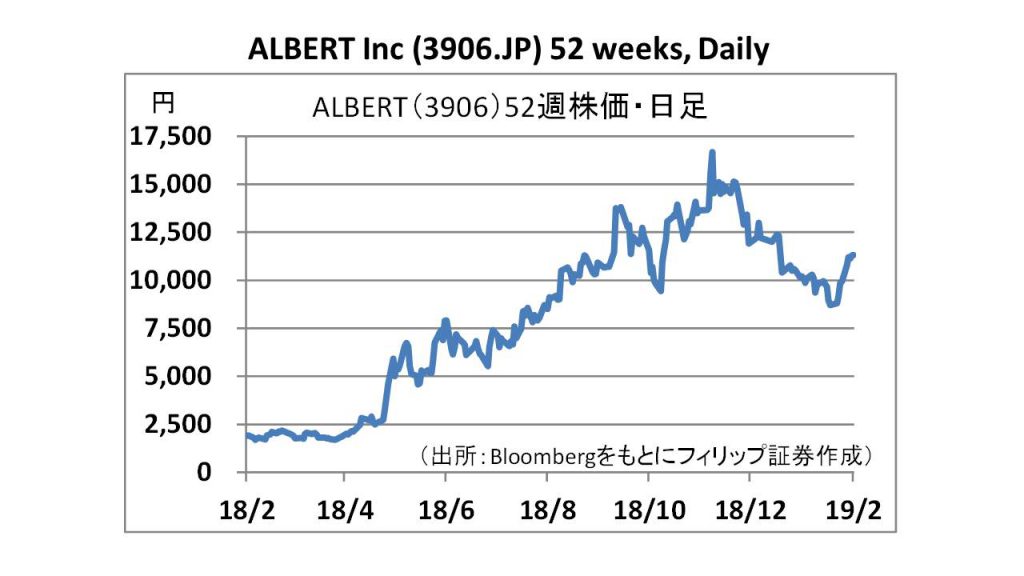 “Global Financial Center: Tokyo” as the rallying point for our national policy?”

In the 4/2 issue of the weekly report, I was paying attention to 6/2 as a key day according to the “42 days” cycle stated in the article with the caption “Trend of past price movements of the Nikkei average?”.  In fact, after showing a high price of 20,981 points on 5/2, the Nikkei average fell sharply to 20,315 points on 8/2.  However, it then recovered quickly and rose to 21,553 points on 21/2.  In addition to expectations on the progress of the US-China talks, and the avoidance of a second closedown of US government agencies, the market had viewed “Trump Show 2” favorably when President Trump adopted a strong stance in trying to fulfill his pledge regardless of friction with his surroundings, with regards his “National Emergency Declaration” in order to build the “border wall”.

Concerns about Brexit and the European economy had led the US dollar to appreciate against the British pound and the Euro, resulting in the Japanese yen depreciating.  Furthermore, the rise in the commodity futures market, and the delay in an upturn in US stocks had pushed back the return of Japanese stocks.  Concerns about “selling as a countermeasure against settlement results” from domestic financial institutions and others with expected severe earnings had proven groundless.  Nonetheless, with respect to the “42 days” pattern from the low of 20,971 points on 26/10 to 18,948 points on 26/12, we need to pay attention to the next key dates around 1/3, which is 42 days counting from 26/12.

Until now, the belief for Japanese stocks is that “a return to a Cold War structure” would induce shifts to domestic stocks.  Furthermore, with a view to stabilizing the administration, it has been said that it would be wise to ride on national policies with vast expansion of budgets for programs involving “National Resilience”, “cashless settlements”, “free childcare”, etc, as well as those for “expanding foreign labors”.  Actually, revitalization of the “money market”, and realization of “Global Financial City: Tokyo”, which are the lifelines of economies, should be positioned as the pillars of “national policies” that will strength the Japanese economy.   According to the “Global Financial Centers Index” released by a British think-tank, New York is ranked No. 1, London No. 2, with Tokyo being No. 6 after Hong Kong, Singapore and Shanghai.  This is not a favorable comparison with the regional gross product of the Tokyo metropolitan area which boasts to be top in the world.

In October last year, the Tokyo Prefectural government had appointed a Tokyo version “Financial Mayor” to oversee this concept.  As for the “Comprehensive Exchange Vision”, JPX (Japan Exchange Group) is progressing with implementation of the TOB this summer and subsuming the Tokyo Commodity Exchange as a wholly-owned subsidiary.  In particular, the consolidation of clearing houses targeted for year 2020 will not only reduce settlement risks and increase commodity trading volume, but also reduce margins required for buying and selling between different products, and dramatically improve convenience for hedge funds and other large and global investors. Let’s keep an eye on the “Global Financial Center: Tokyo” vision as the “rallying point of national policy” for the future.