Investment Summary
The Monetary Authority of Singapore (MAS) announced on December 4, 2020 that four successful digital bank applicants. The Monetary Authority of Singapore expects that the digital bank will be operational as early as 2022. Among four licenses, two are “Digital Wholesale Bank”(DWB) licenses, which are respectively granted to an entity wholly-owned by Ant Group and a consortium comprising Greenland Finance Holdings Group Co.Ltd, Linklogis Hong Kong Ltd, and Beijing Co-operative Equity Investment Fund Management Co. Ltd. The other two licenses are the “Digital Full Bank License”, which are granted to a consortium comprising Grab Holding Inc. and Singapore Telecommunications Ltd. (Singtel), and an entity wholly-owned by Sea Limited.
Razer (the “Company”) financial technology branch “Razer Fintech” once applied for a Singapore digital bank license, but the first round of the list failed. The Company’s management stated that although it failed the Singapore Digital Bank, its long-term development of technology and financial business strategy will be firmly implemented.
The management said that regional countries such as Malaysia or the Philippines also have a lot of opportunity. The long-term attractiveness of the Southeast Asian market lies in its demographic advantage. There are about 600 million young people in the region and the region’s middle-class population is growing rapidly. Favorable policies such as large infrastructure construction, these factors are conducive to the continued economic growth of the region, and bring huge business opportunities to companies operating in the region. According to e-Conomy SEA, more than a third of consumers are new to digital services in Malaysia and the Philippines which presents a huge market opportunity for us to be the first providers in the area of Fintech and digital financial services for them. We believe that although the Company has failed in the Singapore digital banking license, the Company intend to roll our Razer Youth Bank where Razer and Razer Fintech have already established a strong user base and local business presence, be it in regional countries such as Malaysia and the Philippines where digital banking application processes are expected to kickstart in the near term or other regions, such as Europe, Middle East or Latin America where regulators are similarly supportive of innovation in the banking sector to better serve the unbanked and underserved segments of the economy. It can be seen that the Company’s determination to develop financial technology business and the long-term value of Fintech business remained unchanged. 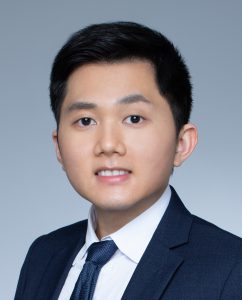 陳柏嘉先生本科畢業於香港浸會大學工商管理學(應用經濟系)。陳先生曾於「四大」會計師事務所擔任審計員及於香港某基金公司擔任買方分析員，擅長財務分析及基本面分析。陳先生現為輝立証券持牌分析師，主要覆蓋通信以及科技硬件行業。 Parker Chan holds Bachelor’s Degree in Business Administration (Applied Economics) from Hong Kong Baptist University. Before joining Phillip Securities , Parker worked at one of the “Big Four” accounting firm as an auditor and worked as a buy-side analyst in a fund house in Hong Kong. He is familiar with financial and fundamental analysis. Parker is now a licensed research analyst at Phillip Securities and covers telecommunication / technology hardware sectors.