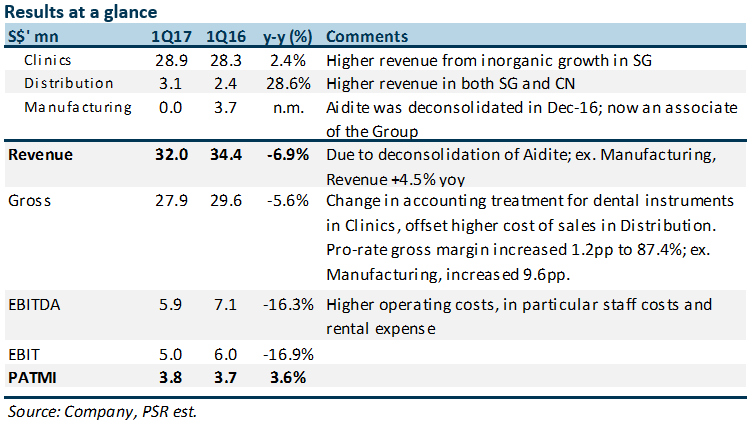 Muted Clinics business growth, awaiting new clinics to lift top line. As expected, growth slowed post spin-offs. We expect unexciting single digit organic top line growth from its Clinics, especially after Aoxin’s deconsolidation. Recall in our 4Q FY16 results report, the Group intends to focus on organic growth in its Clinic business and will step up its expansion plan this year. Nonetheless, we have yet to see any progress for its target of three new clinics in Singapore by 1H FY2017.

Deconsolidation of Aoxin in Apr-17; Will be reclassified as associate moving forward. The Group successfully spun-off Aoxin Q&M Dental Group Pte. Ltd. (“Aoxin”) on the Catalist Board of the Singapore Exchange (SGX), with 57 million placement shares at S$0.20 per share on 26 Apr-17.

Aidite contributed S$7.88 mn to FY16 PBT (51.5% of Group’s PBT). Its first quarterly contribution post spin-off as share of profit from equity-accounted associate was S$0.5 mn. Impact from Aoxin’s deconsolidation will soon be felt in 2Q FY17. We estimated c.26% loss of combined recurring profits from Aidite and Aoxin. Our FY17F EPS excludes gain on spin-off of Aoxin and spin-off listing cots.

Potential re-rating catalysts would be (i) the Group stepping up its pace of acquisitions or picking up favourable deals; (ii) better-than-expected results from Aidite and Aoxin; and (iii) to revive its businesses in Malaysia.