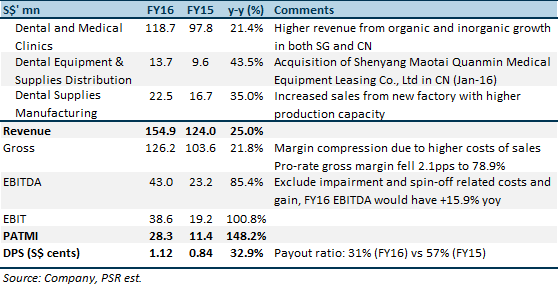 Listing gain to lift FY17F EPS but recurring profit from Aoxin and Aidite to shrunk c.26% post spin-offs. After spin-off listings, its China subsidiaries will be reclassified as Q&M’s associates. Instead of receiving 60% of Aoxin’s profit and 51% of Aidite’s, Q&M will now recognise c.44% of Aoxin’s profit and subsequently c.38% of Aidite’s profit.

Focus on organic growth in its Clinic business. Investment thesis of low dentist-to-population ratio in Singapore remains intact. Key under-served areas identified are West and North areas of Singapore. It targets to open three new clinics in Singapore by 1H FY2017. However, patient demand under CHAS and Pioneer Generation subsidies could be dampened by government’s tighter claim limits this year. Q&M had been a beneficiary of this government initiative.

Downgrade to ‘Reduce’ rating with lower TP of $0.65 (previously S$0.89) based on unchanged 38.2x FY17F PER. We adjusted our forecast FY17 EPS lower by c.28% to 1.69 Singapore cents after accounting for (i) lower FY17F revenue growth expectation, and (ii) c.26% loss of profit from Aoxin and Aidite. Our FY17F EPS excludes gain on spin-off of Aoxin and spin-off listing cots. Potential re-rating catalysts would be (i) the Group stepping up its pace of acquisitions or picking up favourable deals; and (ii) to revive its businesses in Malaysia.

Spin-offs and listing of Aidite and Aoxin

The 60% stakes of Aoxin was acquired with an implied PER of 11x, and we expect the higher valuation of Aoxin post spin-off listing. The recent listing of healthcare service providers on SGX-Catalist Board are Singapore O&G Ltd. and HC Surgical Specialists Ltd. They were listed at a valuation of 12.8x and 12.5x PER, respectively.

The successful spin-offs of Aidite and soon, Aoxin, will be a testament of the Group’s strategy of identifying, acquiring and realising value from business with great potential. Management shared their intention to replicate such model, which would add new growth driver to the Group before spinning it off and unlocking value to Q&M’s shareholders.

Margins to return to pre-FY2014 level, i.e. before acquisition of Aidite and Aoxin.

FY2016 Distribution gross profit margin was compressed by higher cost of sales for Shenyang Maotai. Distribution margin shed 6.1 percentage points (“pps”) to 28.7% in FY2016 compared to a year ago. We think it could stabilise at c.35% after the spin-off listing of Aoxin.

FY2015: Full year contribution from Aidite and Aoxin (both acquired in mid-FY2014)

Q&M Dental Group is currently trading at 20.1x trailing PER, which is below the peers’ average PER at 37.3x. It also has higher than peers’ average return on equity (ROE). These are distorted by the S$21.2mn gain from spin-off of Aidite, the S$1.1mn spin-off related costs and the S$4.1mn impairment of Goodwill.

Q&M has been trading on a high PER (5-year average PER at 41.8x) as it had been gaining ground in China dental market via acquisitions. However, we think that such high premium to its peers are now unjustifiable after Q&M spin-off listing its China businesses and no longer have significant control over them.