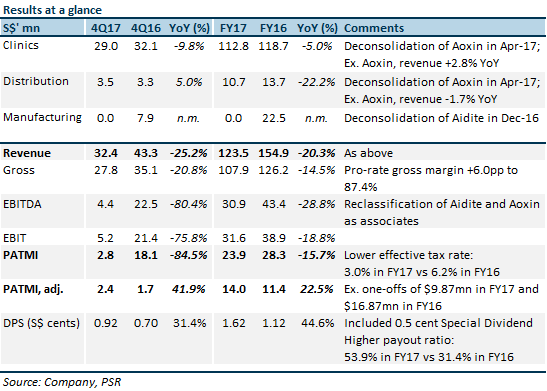 + One-time gain of S$17.4mn from the spin-off of Aoxin (Apr-17). Both Aidite and Aoxin have been reclassified from subsidiaries to associates, contributing $$3.95mn or 27.2% to the Group’s FY17 adjusted PBT. The Group declared final dividend of 0.42 cents and, to our surprise, a special dividend of 0.5 cents.

+ Higher and sustainable gross profit margin, in the high-80s or low 90s. Gross margins for respective business segments have reverted to their pre-acquisition levels – Clinic margin at c.93% and Distribution margin at c.30%.

+ Refinancing and disposal of underperforming clinic could save an aggregate amount of S$2mn moving forward.

Outlook brightens but concerns remain. Post-deconsolidation of its major revenue drivers in China, the Group is stepping up its regional expansion in Singapore and Malaysia to plug the gap.

Despite the step up in its expansion strategy – from its previous target of opening at least 5 new clinics per year – we are lukewarm on the organic growth strategy in Singapore as compared to Malaysia’s.

The Group has earmarked c.SS$4mn for FY18e CapEx (capital expenditures). Notwithstanding that, we do not discount the possibility that the Group will expanding into Southern China via joint ventures and organic growth initiatives with its Chinese associate, Aoxin Q&M Dental Group. Aoxin Q&M Dental has a strong presence in the Northern China.

We expect the Group to fund its expansion via its existing cash balances of S$37mn and/or debt. The Group has recently established a S$500mn Multicurrency Debt Issuance Programme in Dec-17. It also generates over SS$10mn net operating cash flows annually.

With lower cash balances and EBITDA, the Group has bumped up its net gearing ratio from 0.35x to 0.42x, and interest coverage ratio dipping from 12.7x to 9.5x as at end-FY17.

We raised FY18e EPS by 12.3% to 2.3 cent, after taking into account of the targeted 20 new clinics in Singapore and Malaysia. While, in general, we expect local patient demand for healthcare services to recover in 2018, the Group no longer have significant control over its Aidite and Aoxin after the spin-offs. We lowered PER from 32.0x to 27.3x, which is in line with peers’ average FY18e PER.

Potential re-rating catalysts would be (i) successful earnings accretive acquisitions; and (ii) better-than-expected results from associates.