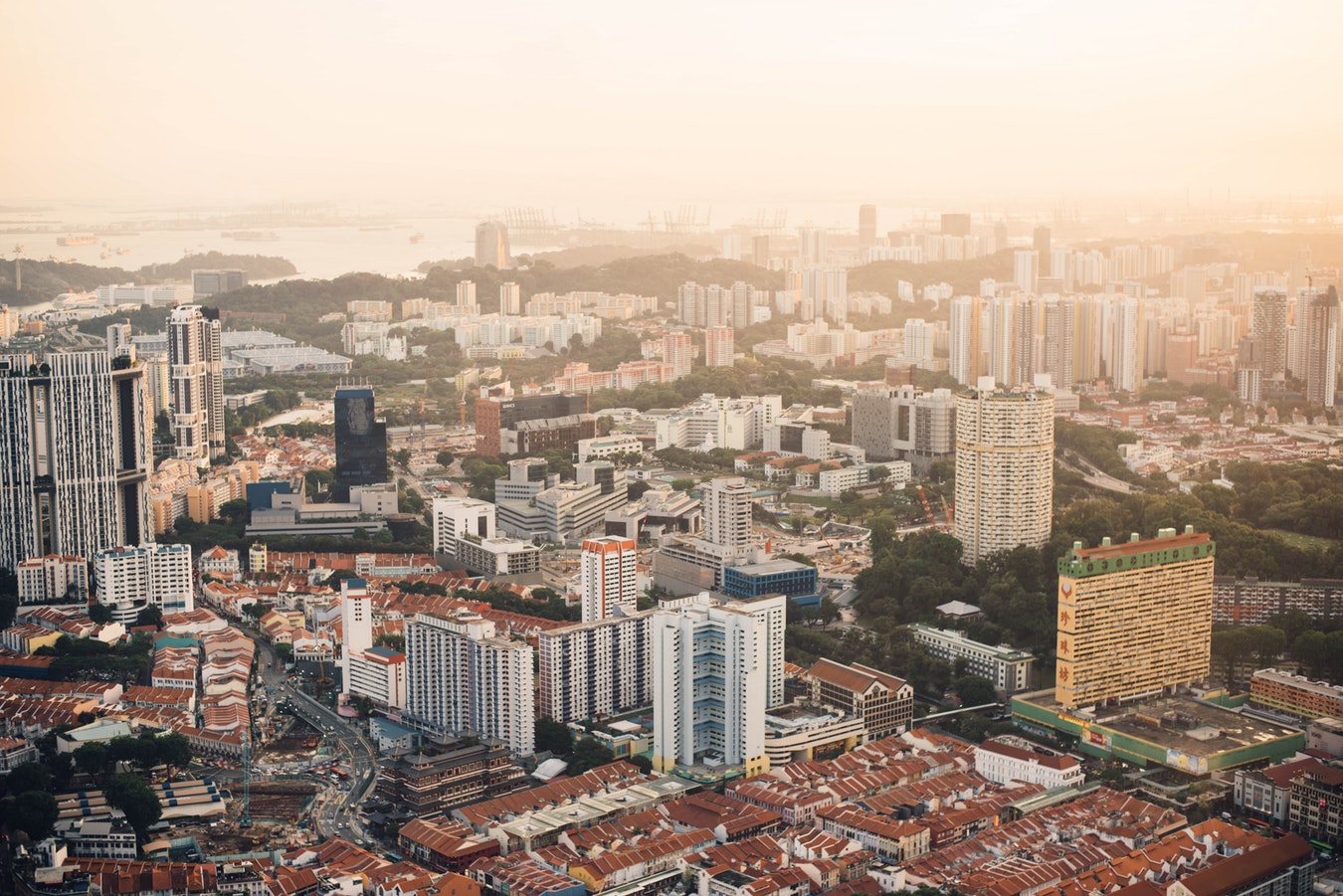 Market: STI fell 3.2% in August, surrendering all its gains from the prior month. As we enter the 10th anniversary of the GFC, predicting the next crisis has been the foremost preoccupation of the media. The most interesting scenario mentioned has been higher interest rates and an economic slowdown sparked by a growing U.S. fiscal deficit. The positive impact of fiscal stimulus on the U.S. economy should wear out over the next two years. But this deficit spending will remain and the U.S. will need to borrow and sell even more Treasuries. To attract foreigners into buying these Treasuries, interest rates will need to rise, which will dampen economic growth. In turn, this will weaken the US dollar, negating the effects of higher rates on the dollar. A negative spiral will then ensue. Another notable concern is the side effects of quantitative easing. The wealthy have benefited from central-bank purchases of financial assets. This has widened the wealth gap and fuelled the rise of populist and nationalist-led regimes. The danger of such regimes is the higher chances of conflict within and between countries.

Two years is an eternity for most of us “investors”. Foreigners’ tolerance for U.S. government bonds despite a $1tr fiscal deficit will always be artificially high. The US dollar may be flawed, but it will be hard to lose its global reserve currency and trade settlement status unless a better liquid alternative is found. Therefore, for run on Treasuries to materialise, it needs to be accompanied by higher risk-free yields appearing out of Europe and Japan.

In Singapore, inflationary pressures are piling up. MAS core inflation in July was 1.9%. This was a 4-year high and at the upper end of the MAS’ 1-2% expectation. The bulk of the rise in July was due to a 12.5% spike in fuel and utilities. Electricity and water prices have risen 16.5% and 15% respectively this year. Next will be public-transport fares. The maximum increase is 4.3% next year. Our worry is the transmission of costlier fuel and utilities into the food index. The hawker and restaurant price indices carry a large 20% weight on core CPI and prices have been rather benign in the past two years. The MAS’ last policy statement in April signalled a rise in the slope of the NEER (we refer as SGD). Its next statement in October should at least see them maintaining modest and gradual appreciation. With the trade war looming larger and larger, Singapore’s still-nascent recovery and currency weakness across Asia, it may be too aggressive to raise the slope or even re-centre the band of the SGD.

Recommendation: The backdrop for equities in Singapore is turning weaker. News flow is negative as the trade spat worsens. And as we enter U.S. mid-term elections on 6th November, we expect the market to trade even more cautiously. Other economic conditions are not encouraging. We can expect emerging-market economies to weaken as their currencies get pummelled. The slightest signs of higher imports or weaker trade balances will result in the selling pressure on their currencies. Near-term solutions for emerging markets will be contracting consumption and raising interest rates. In developed countries, with the exception of the U.S., Europe and Japan are stuttering. Our position is to remain defensive. 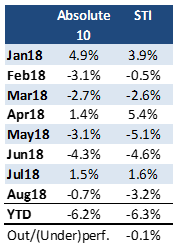 Our inaugural Phillip Absolute 10 Model portfolio began in January. It started well with a rise of 4.9% in January. Banyan Tree and CapitaLand led gains in January. DBS has been a significant contributor to our performance with a gain of 15% for the period of Jan-Feb18. We then switched to OCBC in March due to the higher upside to our target price and a beneficiary of higher interest rates (in particular through insurance business). In July we swapped out AsianPay TV, Dairy Farm and OCBC, with CapitaLand Commercial Trust, Sheng Siong and DBS.

In August, we recovered much of the lost ground this year to the STI. Our largest gainers were Sheng Siong, CapitaLand and Chip Eng Seng. Weakness was in Geo Energy, Banyan Tree and DBS.

We are still comfortable with our portfolio and no changes will be made. Geo Energy performance was affected by the weather slowing production and one-off cost surge in operating cost from production of a new mine. Banyan Tree’s Maldives resorts still reeling from effects of state of emergency. And Phuket will experience some near-term loss of traffic flow following the tragic accident affecting a group of Chinese tourist. DBS share price under pressure over the impact of the escalating trade tensions and recent property cooling measures slowing down loans growth.

Worst performing sectors in Aug18 were Conglomerate, Consumer and REIT-Others. Conglomerate suffered from selling in Jardine Strategic (-9.0%) and Jardine Matheson (-6.5%). Consumer suffered from large losses in Thai Beverage (-18.4%) and Genting Singapore (-16.4%), which could not offset gains in Dairy Farm (+13.5%) and Sheng Siong (+9.3%). REIT-Others fell on the back of selling in Hutchison Port Trust (-3.9%) and Parkway Life (-2.9%). 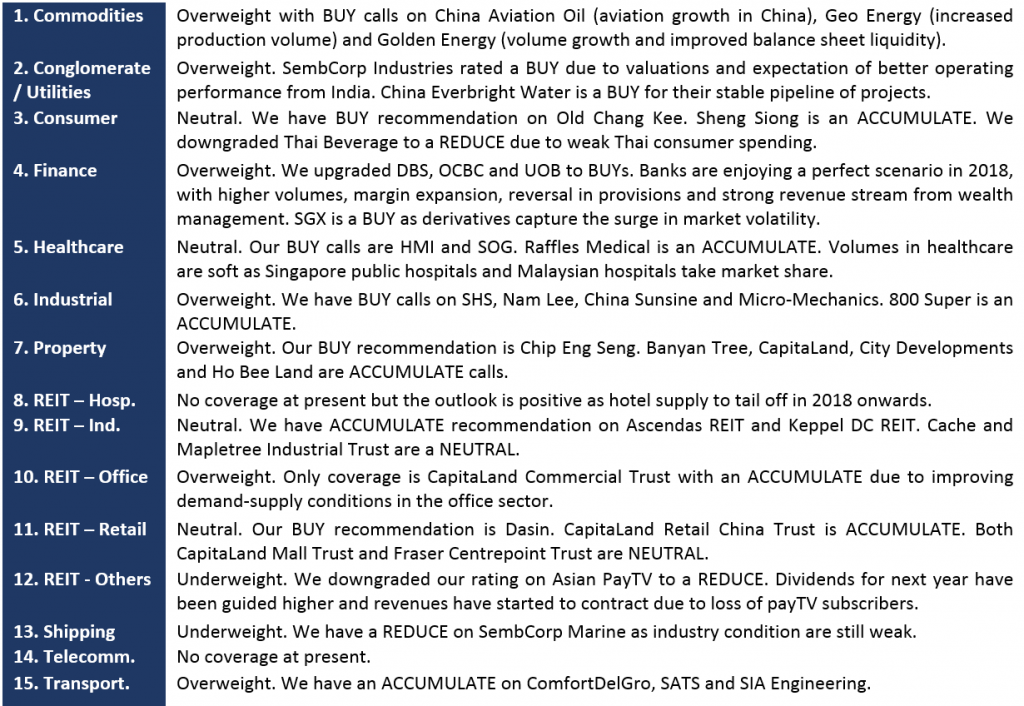