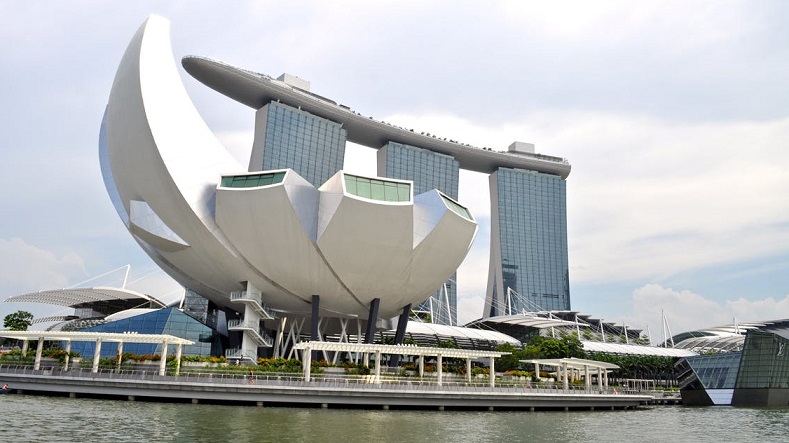 Market: STI was up 5.4% in April. This was led by financials, which now account for around 40% of the index. This makes STI the most leveraged to the financial sector, vs the 15-20% weights for US and European indices. The macro highlight of the month was the crossing of the 3% Rubicon by 10-year US Treasuries. This – or 3.05% to be precise – technically signifies the end of the 35-year bull market. A rise in bond yields can be greeted positively by equity markets when it flags higher growth expectations. The more pertinent issue is not yields but underlying inflation. It is runaway inflation that we believe is the larger worry, where central banks need to aggressively respond. It was positive that despite hitting its 2% inflation target, the Fed said this target (not cap) could run “symmetrically”, which is to say inflation has equal chances of moving in either direction. We still do not believe inflation will rise dramatically when money supply and velocity remain at multi-year lows.

To us, a more worrying is the USD’s unrelenting rally. Its rise could persist as growth differentials narrow, especially after Europe’s speed bump in economic growth. Another reason for USD strength is the interest-rate differential. We simply have one central bank – the Fed – ending QE while the other two – ECB and BOJ – are still running theirs. A rising USD hurts emerging markets, especially countries that borrow in USD without corresponding USD sources of revenue. Countries which face such a precarious mismatch include Brazil and Turkey. Both currencies have shed 8-9% in the past three months. Closer to home, the Indonesian rupiah is under pressure even after currency intervention by the central bank. The other perennial risk of USD strength is a possible resumption of uncontrollable capital outflows from China. This could rekindle devaluation or deflation fears.

In Singapore, electronic stocks were massively sold down. A number of names were down around 25%. The main trigger was an expected peak in the growth rates of smartphones and consumer products such as e-cigarettes and smart lighting. Absent this sector, we are left with financials and property. We think oil & gas is interesting, but its resurrection could come only at a later stage. While oil prices have rebounded, upstream companies are still hesitant to spend. Wall Street has been rewarding those that have displayed their newfound capex discipline.

Recommendation: Our bottom-up STI target of 3,900 (8% upside) is left intact. Banks should take the lead in stock-market performance. We raised target prices for all three following 1Q18 results. We are Overweight on property stocks as take-up of new launches continues to surprise positively. Developers that can launch earlier will be able to lock in outsized gains. REITs and other yield stocks are beginning to look more appealing. Rising interest rates have largely been priced in, the relative strength of the Singapore dollar is attractive while the domestic economy is gathering steam. Singapore announced GDP growth of 4.3% for 1Q18 – a pleasant surprise since this beat the prior quarter’s 3.6% YoY expansion. Next-generation companies with differentiated products/services is another segment we favour. We have started coverage on one, Y Ventures, and look forward to recommending more. 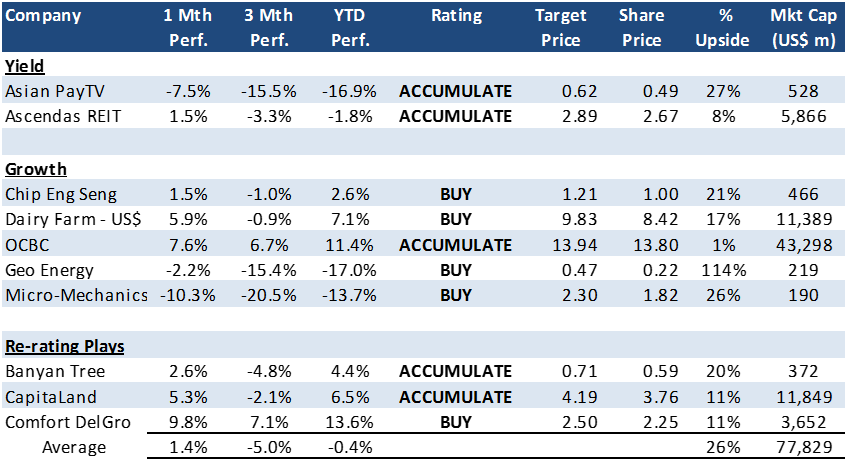 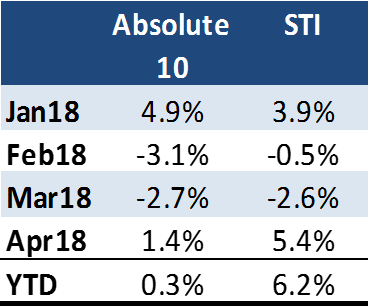 Our inaugural Phillip Absolute 10 Model portfolio began in January. It started well with a rise of 4.9% in January. Banyan Tree and CapitaLand led gains in January. DBS has been a significant contributor to our performance with a gain of 15% for the period of Jan-Feb18. We then switched to OCBC in March due to higher upside to our target price and a beneficiary of higher interest rates (in particular through insurance business). Dragging our YTD performance has been Asia Pay TV and Micro-Mechanics. We still like Asian PayTV for the yield and utility-like nature of the cable business. Micro-Mechanics was caught up in the recent sell-down of all electronics stocks. Our preference for Micro-Mechanics is their ability to carve out a very profitable, 50% plus gross margin, and relatively recurrent business in semiconductor supply chain.