Market: STI was down only 0.5% in March. But this masked broader weakness in the market. Of its 30 component stocks, only eight posted positive returns. Half were banks and electronics. The market had a whiff of President Trump’s stance on international trade when he withdrew the US from the TPP shortly after his nomination. Since then, he has played down his trade rhetoric. It is now back on. He has declared trade wars as good and that they can be won. He has also exercised the US’ so-called nuclear option in trade by invoking national security as the reason for import tariffs. This is supposed to be used in times of emergency or war. While steel and aluminium only comprise 2% of the US’ imports and nothing concrete has been rolled out, his rhetoric has fanned new uncertainties. The fear is retaliation and an escalation of trade protectionism. Of concern will be the current US investigation into China’s violation of intellectual-property rights. It may result in the US restricting Chinese investments in US companies, tariff penalties on imports, and visa controls. What could hold back the President would be his own Republican Party members who have no interest in dialling back the current economic momentum as they head out to the 2018 mid-term elections.

A Peterson Institute for International Economics policy brief laid out the advantages of cross-border trade. Trade allows industries to exploit economies of scale and generate technological spillovers (spread of innovation), import competitiveness (curtailment of monopolies) and comparative advantages (through specialisation). Studies suggest a $0.24 gain for GDP for every $1 rise in two-way trade. Admittedly, there are adjustment costs from jobs lost. However, the ratio of economic gains from trade to the cost of displaced workers is 5 to 1. Any gains for the domestic steel sector in the US will be at the expense of steel-consumption sectors such as auto, construction and machinery.

In Singapore, the headline news was the FY18 budget and completion of the reporting season. Most impactful was an incremental rise in buyers’ stamp duties for property and an extension of tax transparency to REIT ETFs. Increases in GST have been deferred. Banks surprised the market with a large jump in ordinary dividends. The three raised their aggregate ordinary dividends by 25% or S$1bn, 90% alone from DBS. Electronic companies beat expectations with sales and earnings growth of 30% and 100% respectively in 2017.

Recommendation:   We remain Overweight on banks, property, electronics and the consumer sector. DBS’ strong performance has tilted our preference to OCBC. The latter’s insurance business is another beneficiary of rising interest rates. Its Hong Kong loan growth remains above trend. The property sector succumbed to some weakness after the recent rise in stamp duties. Still, we are positive, as en-bloc liquidity has yet to surface. Electronics continues to enjoy a positive outlook, though USD weakness may take a bite off their earnings. The consumer sector still reels from sluggish consumption in the region. A stock we upgraded was SGX. It will be a beneficiary of the recent spike in volume and volatility. In addition, it pays a 4% dividend yield. Our STI target of 3900 has been maintained.

Best performing sectors in Feb18 were Industrial, Banks and Healthcare. The gains in industrials came from electronics names such as Hi-P (+29.3%), AEM (+28%) and Venture (19.5%). Positive returns on financials was predominantly due to DBS (+8.7%). The other two banks were up less than 2%. SGX dropped 7.9%. Healthcare was virtually flat due to rise in Raffles Medical (+3.6%).

Worst performing sectors in Feb18 were Shipping, REIT- Others and Consumer. Shipping faced weakness from SembCorp Marine (-15.2%) and PACC Offshore (-14.8%). REIT-Others tumbled on the back of selling in Hutchinson Port (-12%), and Accordia (7.2%). Leading the losses in consumer were Genting Singapore (-14.1%) and Thai Beverage (-9.2%). 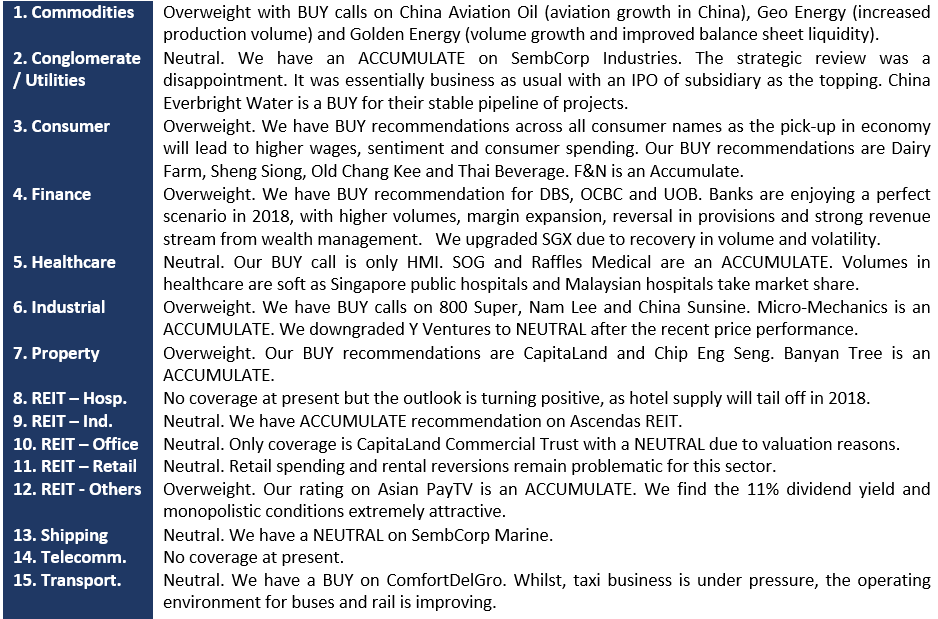 Comment: Bigger ticket purchases and en bloc purchases will be impacted more as the incremental 1% tax is only on the portion of home values above S$1mn. Over the last 2 years, the average transaction value was slightly below S$1.5mn, with average size condominium units sold at c.100sqm. For the average transaction, impact will be smaller – 0.3% or S$5,000 extra for a $1.5mn house. As the quantum goes higher, the closer the impact to the full 1% of purchase price. We do not expect a material negative impact on demand given the relatively small full impact vs purchase price for the average transaction. En bloc sales momentum, which has slowed lately with lower premiums paid vs reserve prices, could see further slowdown as the additional BSD eat into redevelopment margins.

SBS Transit, Singapore’s largest bus operator, has clinched an S$472 million deal to run 18 services in the Bukit Merah area, with three being cross-border routes into Johor Baru. It beat five other bidders in a competitive tender called by the Land Transport Authority last April. They were Singapore rail operator SMRT, the UK’s Go-Ahead and Australia’s Tower Transit – which operate existing bus routes here – as well as Chinese operator Shenzhen Bus Group and a consortium between Jiaoyun Group and Travel GSH.

Comment: SBS Transit is the incumbent for the Bukit Merah package, which started as one of the 11 negotiated packages since September 2016. The first three packages tendered through competitive bidding were the Bulim, Loyang and Seletar packages. The Bukit Merah package is now the fourth to be tendered through competitive bidding. With the award of the contract, there is continuity in the revenue stream for SBS Transit.