Market:  STI was down 4.65% in June. It has shed almost 10% over two months. Escalating trade tensions was the culprit. It was supposed to be mere posturing, but President Trump has taken the trade-war tail risk a notch closer to the base case. He will likely be emboldened by a strong US job market, fiscal stimulus support and firm approval ratings. Hard to fathom the economic impact of this because there is little precedent. We looked at some IMF studies on the impact of tariffs. A 10%-point rise in import tariffs by both the U.S. and the rest of the world could lop 1% off world trade and 0.5% off world GDP. The slower growth will stem from less trade, fewer goods produced and decreased business spending. The damage on individual countries will depend on how quickly their currencies adjust to the new terms of trade.

The trouble with turning completely bearish on equity markets is that Trump could reverse his tariff stance virtually overnight. For now, the odds are that the tariff net will be cast wider. The next two dominoes will be US$400bn of Chinese imports plus US$200bn of auto and auto-parts imports. Another impetus to raise the rhetoric on China is the recent weakening of the renminbi against the US dollar. It is fuel for China sceptics, Ross and Navarro. There is also the unresolved issue of NAFTA. Political agendas now dictate the outlook of markets rather than economic rationality or any obvious data points. And they are highly unpredictable. We expect investors to demand higher risk premiums.

Our strategy was to go more local and seek relative shelter from the tariff impact on global growth. However, another tail risk has emerged in the past few days. The authorities have slapped additional stamp duties on property transactions and demanded higher LTV for mortgages. Like everyone else, we were surprised. With HDB prices moving sideways and the property upcycle only four quarters old – the previous two lasted 17 quarters, we did not see the urgency. Obviously, we are not as clairvoyant.

As we review 1H18, we had our share of hits and misses. Global growth was resilient, as envisaged.  Improvements in capital spending spurred aggregate demand. Interest rates did rise but there was no runaway inflation to trigger pre-emptive rate hikes. The biggest miss for us was Trump’s willingness to enter into a trade war. Sector-wise, banks, consumer staples and land transportation were the performers. Our misses were property, coal and dividend-paying stocks. The two initiations that performed well for us were Y-Ventures and China Sunsine Chemical.

Recommendation:  We are lowering our STI target to 3700. While our bottom-up computation is still at 3900, we are now benchmarking against the lower end of the respective STI stock target prices. This discount is to incorporate the upcoming macro headwinds as trade tensions rise. Banks are our favoured sector, together with consumer staples. Fundamentals for coal remain positive, power consumption in China is rising at its fastest pace in 7-years. As electronics loses its leadership, we look for some rotation to the oil and gas sector. We have yet to find suitable proxies. Commercial and industrial property should see some recovery in investment flows as the residential route has been blocked.

Best performing sectors in Jun18 were Healthcare, Conglomerate and REIT-Retail. Healthcare was helped by a 3.5% gain in IHH. The other stocks in the sector fell Raffles Medical (-3.8%) and HMI (-4.8%). Conglomerates experience selling across all stocks except Jardine Matheson (+1.1%) and Jardine Strategic (+1.9%). REIT-Retail benefited from a flat performance in CapitaLand Mall Trust (0%) and Mapletree Commercial (0%). 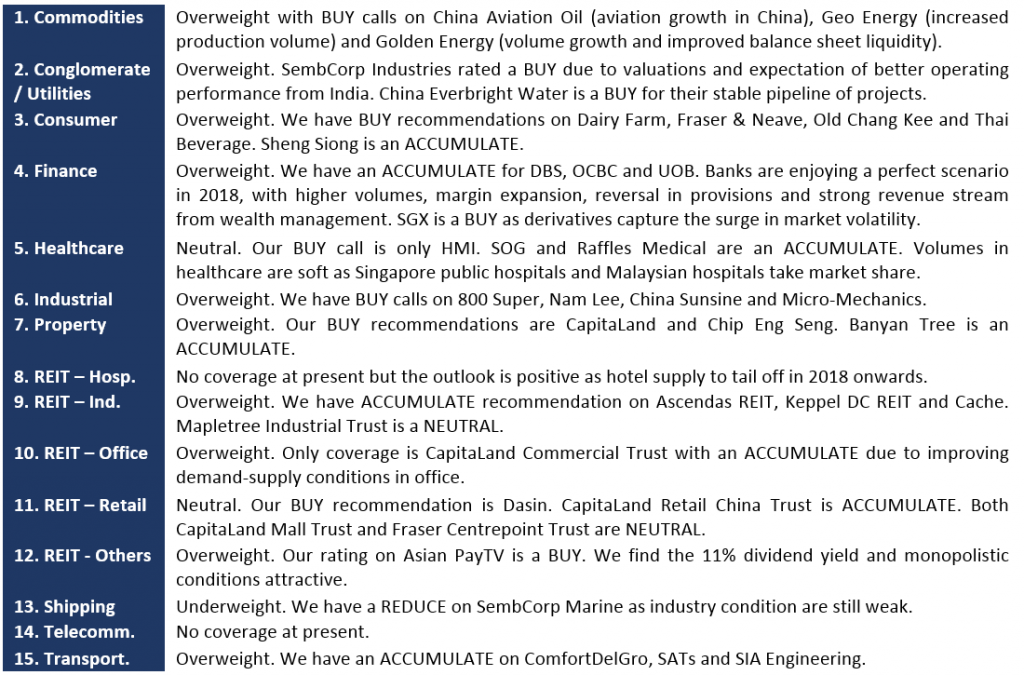 SMM has secured its first polar expedition cruise ship design contract. The contract signed between SMM’s subsidiary, LMG Marin and Croatia’s Brodosplit Shipyard, is for the design of a ship to be built for Quark Expeditions. It calls on LMG Marin to deliver a basic design package for the 128-metre ship, which can carry up to 200 passengers and 116 crew members. The ship is scheduled for completion by the third quarter of 2020. It would join Quark’s pool of purpose-built vessels for expeditions to the Arctic and Antarctic.

Comment: The cruise ship design contract marks a milestone for SMM in terms of breaking into a new market. However, the core business, offshore and marine engineering is still challenging. We are expecting only a gradual recovery from offshore drilling and production activities. We believe that SMM will have a turnaround when upstream capex resumes substantially. Therefore, it will take some time for SMM to pick up its performance. More critical will be penetrating the FLNG market.

Comment: Since announcing the intention to grow its retail footprint through the asset-light management contracts strategy, CapitaLand has signed 10 agreements with a total GFA of about 5.3mn sq. ft in less than two years. While this is still a small fraction of the total 91 malls CAPL currently runs and insignificant contributor to earnings, we are positive on this strategy, as it allows CAPL to scale up in a less capital intensive manner while leveraging on its strength as a reputable mall operator.

CapitaLand acquires prime mixed-use site in Chongqing worth 5.7b yuan

Capitaland has acquired all the shares in a company that owns a 32-hectare prime mixed-use site in Chongqing, in a move that will boost its residential pipeline in China by more than 2,100 units. The amount payable is 2.2 billion Chinese yuan (S$454.3 million), which includes the agreed value of the property at 5.7 billion yuan

Comment: This translates to a land price of RMB17,800 per square metre of land. The land parcel also includes two greenfield sites and a brownfield site which would yield office and retail space on top of the 2,100 residential units. We note average selling prices for residential prices in Chongqing have picked up pace since 1Q17, with an average YoY growth of 24%. We maintain our Accumulate call on CAPL with unchanged TP of S$4.19. Residential sales of RMB10.6bn in China expected to be handed over in the next 9 months will further provide support to earnings in FY18 on top of the recurring portfolio income.

Frasia Properties Sàrl owns the property known as Ropemaker Place, a 21-storey Grade A office building comprising approximately 602,000 square feet of commercial space.  Ropemaker Place occupies a substantial freehold island site of about 1.37 acres (about half a hectare) in the City of London.

Comment: With this S$1.2bn investment, Ho Bee’s has doubled its investment properties portfolio size in UK to S$2.4bn. This is close to half the Group’s total investment portfolio size. At a net yield of close to 5%, and a long WALE of close to ten years, this investment will provide recurring income that will further support. Forex losses have been mitigated with a natural hedge by funding the acquisition though pound-denominated loans. We estimate with this rental property, total recurring income for FY18e would be sufficient to support close to 4x estimated dividend of SG 8cents for the same year.

Comment: There is no longer a Right of First Refusal (ROFR) over CWT’s assets. However, to put things in context, Cache’s track record has been 23 acquisitions since IPO, out of which only two were ROFR assets from CWT. Cache has not been heavily reliant on the ROFR assets for inorganic growth.

It is worth noting that Warburg Pincus has a stake in both ARA and e-Shang Redwood (ESR). In view of the ongoing merger between ESR-REIT and Viva Industrial Trust, it appears that Cache could soon be part of the consolidation theme alongside Sabana Shari’ah Compliant REIT (9.05% stake held by ESR).

Comment: Y Ventures entered into a three-year distribution agreement with Beast Kingdom Co. Ltd for the exclusive distributorship in Southeast Asia. Beast Kingdom is a major Disney licensee with products ranging from Disney, Marvel, Star Wars and Pixar; this will allow Y Ventures to extend its product range beyond academic textbooks and private label brands and is a huge step in expanding its distribution portfolio.  Y Ventures will now have access to a variety of popular figurines, toys, novelties and stationery alongside with Beast Kingdom’s trending figure series Egg Attack Action to add to its arsenal of products. Y Ventures will provide its expertise in data analytics to augment product selection, optimise online marketing, ensure an end-to-end delivery and handle after-sales support to customers.  This partnership signified Y Ventures data analytics capabilities and strengthened its foothold to be a leading e-commerce company in the region.