We believe the worst could be over for the sector, although the road to recovery could be long. The Fed Financial Stress Index has improved significantly from its recent peak in March 2020 (Figure 3), reflecting the Fed’s large-scale asset purchases and fiscal-relief efforts. As at Oct 2020, the index stands at -0.36. Values below zero denote below-average financial-market stress. With that, we believe credit markets have largely stabilised and funding liquidity has improved. Most major banks are also able to adhere to the Fed’s newly-imposed CET1 capital requirement of between 7-13%, which reflects their relatively strong balance sheets.

Near term, a surge in loan defaults may lead to cuts in earnings expectations. However, this might already have been factored into valuations. We believe banks have largely accounted for their default risks. Allowances for loan and lease losses totalled US$221bn as at end-September. This was more than double pre-Covid levels and just 5.6% shy of their peak during the 2009 financial crisis (Figure 4). Therefore, we believe any subsequent build-up of loan loss allowances should start to ease.

Still, the recovery may be onerous. Despite economic reopening, the weekly economic index still falls below pre-Covid levels (Figure 5). Total loan growth has weakened in recent months, after borrowing under the government’s relief programme tapered off and banks tightened underwriting (Figure 6). Interest rates are also expected to stay near zero through at least 2023, suppressing net interest margins. With these, we expect continued pressure on banks’ core lending profitability.

Both Biden and Trump have different ideas on tax policies and financial reforms. We provide an overview of their proposed polices in Figure 1:

Another Trump term could be positive for the financial sector as we expect an extension of his 2017 Tax Cuts and Jobs Act. Large U.S. banks booked record profits under Trump in 2018, partly thanks to the 2017 tax overhaul which cut headline corporate tax rates from 35% to 21%. Their tax savings in 2018 and 2019 (Figure 7) made up 12-15% of their full-year net income in those two years. In terms of banking regulations, Trump may stick to his deregulatory agenda.

Biden intends to raise corporate tax rates back to 28%. If this comes to pass, we estimate that U.S. banks’ FY2021E net income may be affected by 6-8%. Already, the sector is juggling prolonged low interest rates and weakening loan growth. Bloomberg estimates that major U.S. banks’ earnings may fall by 30-40% in FY2020E from the Covid-19 fallout. A further hike in corporate tax rates may hinder their earnings recovery.

Biden plans to strengthen financial regulations and reinstate financial reforms rollbacked by Trump. We believe this will have a greater impact on the smaller regional banks. During his term, Trump eased restrictions on asset thresholds for stress tests and the “Volcker Rule”, which mainly affected the smaller banks. Large U.S. banks are deemed “too big to fail” and are already subject to the Fed’s stress tests and stringent restrictions on capital requirements and shareholder payouts. As such, any further oversight may affect them lesser.

Current forward P/E ratio for the financial sector stands at 13.0x. This is below its 5-year historical average of 14.8x. Forward dividend yield stands at 2.47%. This is above its 5-year average of 1.90%. Major banks except Wells Fargo have maintained their dividend payouts after their stress tests. Near term, further increases in dividends are unlikely due to Fed’s cap on dividend distribution. The sector has been lagging the overall market. About 52% of S&P 500 financial stocks are trading above their 200-day moving averages vs. 70% of the stocks for the S&P 500.

That said, we believe the worst may have been over for the sector. Investors will need to be patient. For positioning on a Biden win, we favour accumulating large U.S. banks on weakness, considering their attractive risk-to-reward proposition. The sector is down 18.9% YTD vs. gain of 7.8% for the S&P 500. Corporate tax hikes may put a dent on the whole financial sector but whether they come to fruition would depend on the composition of the new Congress and the pace of the economic recovery. On the other hand, Trump’s extension of his tax-cut policy will likely favour the sector and his deregulatory stance may make smaller banks attractive. 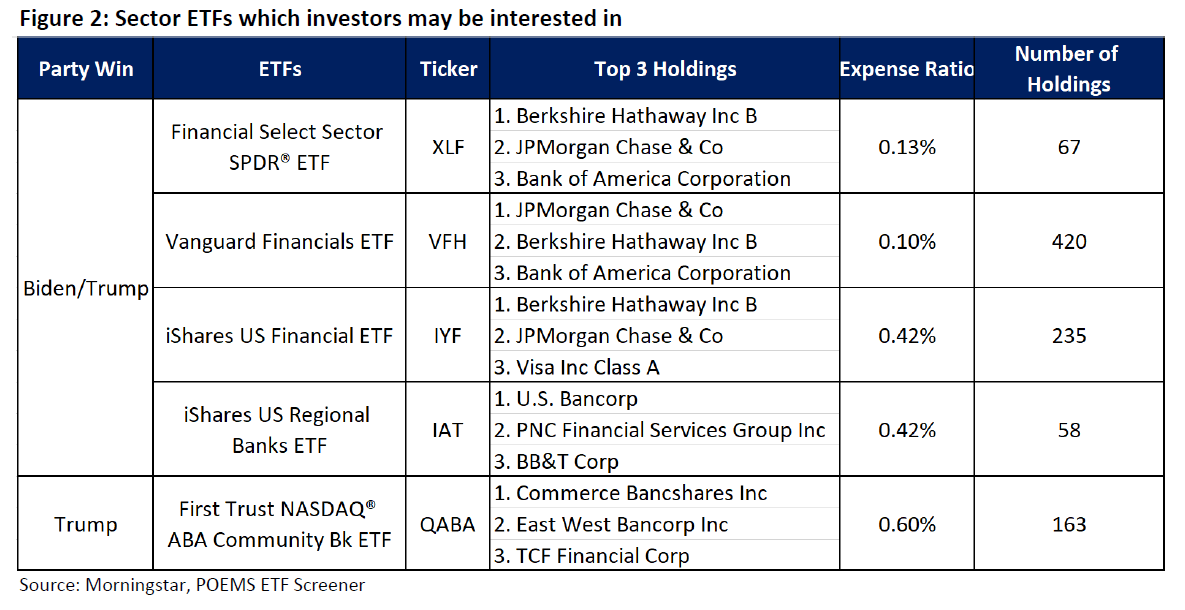 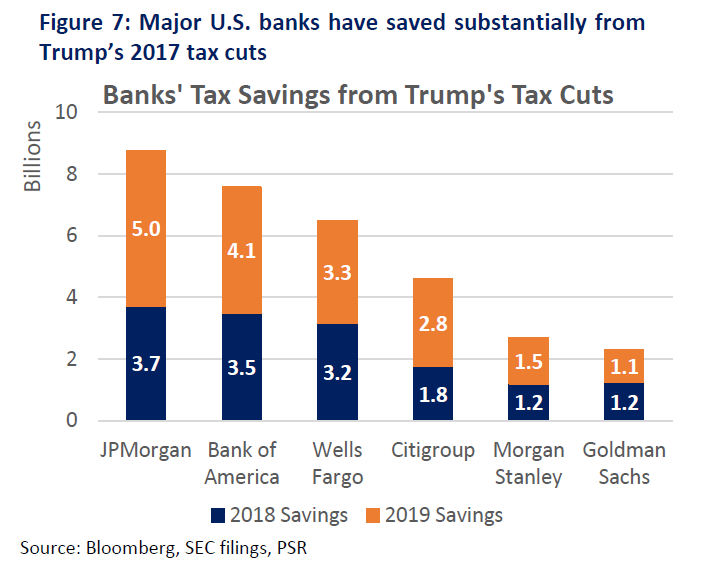