Historical market performances before and after election day

Before election day. In past election years (1980-2016) excluding 2008, the S&P 500 gained 0.73% on average one month before and 0.99% one week before election day (Figure 1). We do not see a repeat this year, considering market turbulence caused by Covid-19 resurgences, delays in fiscal stimulus and risks of a disputed or delayed election outcome. This is the second election since 1980 where we do not see a positive performance for the S&P500 one week into elections.

After election day. Market performances tended to remain fairly muted for several weeks. This might be because results announced on election night are considered unofficial. Certification of the results can take weeks due to the need for verification across the states. In a close race, the certification process is even more crucial and may take longer, causing market volatility. Some investors could opt to stay on the sidelines until the results are finalised. However, if we extend our investment horizon, the market tended to regain momentum after that. Returns for the S&P 500 averaged 4.44% three months after and 6.52% six months after election day (Figure 1).

Recommendation. Due to the surge in mail-in voting this year, there is greater risk of an electoral dispute. Market sentiment may turn risk-off in the near term.

We continue to believe that there will be fiscal stimulus, regardless of who becomes President, though this could be delayed till February 2021. We also remain hopeful of the discovery of a vaccine for Covid-19 by mid-2021, with 11 potential vaccines in Phase 3 trials. This may ease concerns over virus resurgences and restore risk-on sentiment on equities. We remain bullish on the market in 2021. In past election years (1980-2016), the S&P 500 delivered higher returns under an incumbent president than a non-incumbent (Figure 2). This implies a Trump win may be better for the market, especially given his tilt towards business-friendly tax cuts and deregulation. Regardless of who wins, however, we believe investors should stay invested. Historically, a non-incumbent win still delivered an average return of 3.47% three months after and 3.77% six months after election day (Figure 2). 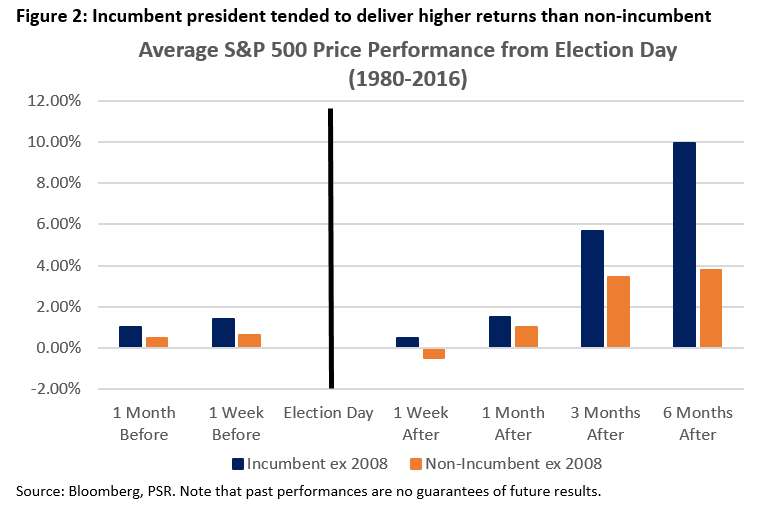 We summarised the historical returns of different sectors in past election years (1992-2016 ex 2008) in Figure 3. We omitted the year 2008 as returns that year were heavily skewed by the global financial crisis.

Risk-off possible before election day due to uncertainties. In past election years, defensive sectors tended to outperform sensitive and cyclical sectors. This likely reflected investors’ jitters over election results. Returns across the sectors were generally weak. Sensitive sectors such as energy and communication services tended to underperform.

Bulls stand to gain on longer investment horizon. Investors who adopted a longer-term timeframe of 3-6 months after election day would have benefitted from a bullish turn in sentiment on all sectors. Traditionally, cyclical sectors outperformed, with financials, materials and consumer discretionary being the strongest-performing.

Going into election day, we summarise the impact of a Biden win on various sectors and industries in Figure 4. A Trump win is expected to support the status quo and a continuation of policies from his first term. 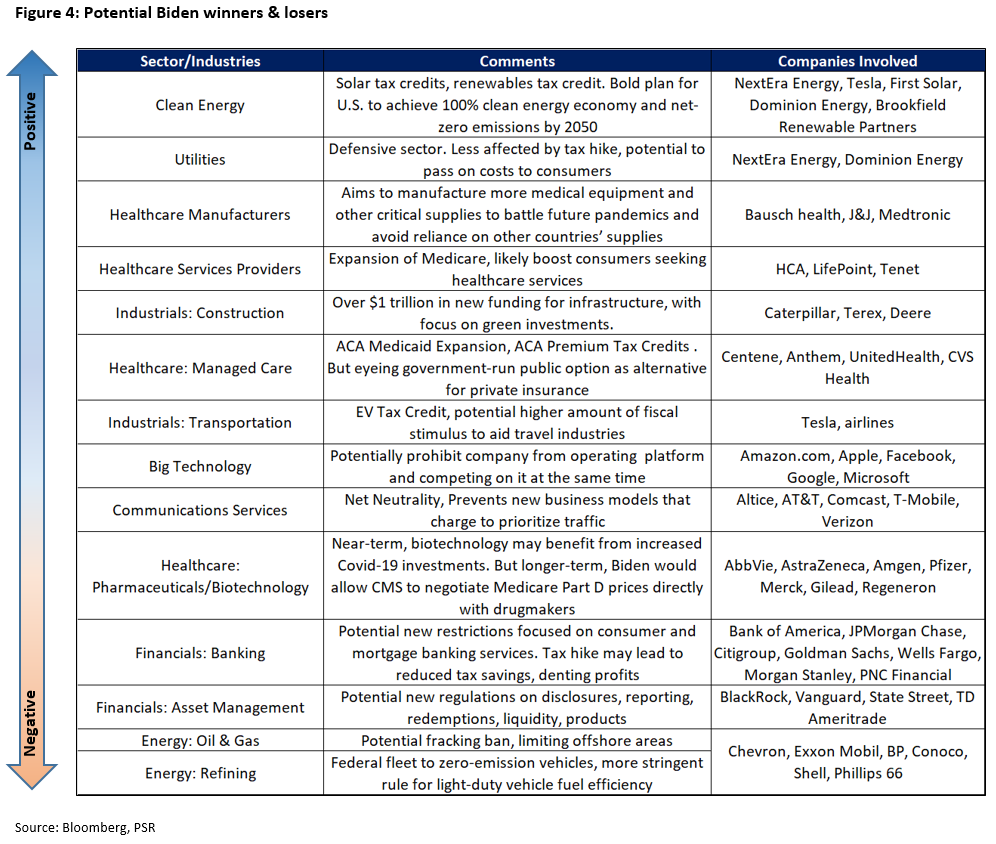 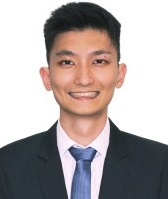