+ Net interest income driven by loans growth and NIM expansion. Loans grew 10.3% YoY and NIM expanded by 2bps YoY to 1.67%. Loans expanded the most in Greater China (16.6% YoY), driven by loans to housing, building and construction and financial institution. Housing loans made up the largest proportion of total loans at 26% of total loans. Management reiterated the high-single-digit loans growth guidance for FY18e.

+ Improving asset quality. Allowances declined 88% YoY to S$21m due to heavy provisioning made for the exposure to the O&G sector last year. New gross NPA was S$277mn, the lowest in 3 years. Credit costs declined by 14 bps to 5bps YoY. The current underwhelming credit cost is expected to normalise from the current 5 bps to 15-20 bps. Despite the higher credit cost guidance, there are no new problematic loan portfolios right now. We pin our forecasted credit costs at 15bps for FY18e.

– NIM was softer than expected. NIM had been rising every quarter for OCBC in FY17. However, NIM was surprisingly flat for the past two quarters when other banks saw sequential improvement. The higher NIM in Singapore and Malaysia was offset by weaker NIM from Indonesia and Hong Kong. Hong Kong’s NIM came down because the increase in the cost of funds due to rising HIBOR did not result in a proportionate increase in prime rates. In Indonesia, it was difficult to increase asset yield as well due to the increase in funding cost, especially with the authorities advocating single digit lending interest rates. We forecast FY18e NIM at 1.69% as we expect NIM to improve with more capital being directed to loans with higher yield and more rate hikes in FY18.

– Other non-interest income fell 7.6% YoY. The decline is mainly attributable to a fall of 96.3% YoY in net gain from investment securities. However, this decline was offset by a spike in net trading income where a 40% belongs to the marked to market portfolio in Great Eastern’s account (1Q18 was negative and 2Q18 was positive). The rest came from structural capital positions and a small portion from trading activities.

The flattish NIM this quarter is expected to improve as the majority of the mortgage repricing based on rising interest rates will likely to happen from 3Q18 onwards. The reluctance in repricing was to ensure that interest rate trends are sustainable before repricing mortgage loans and to provide stability to customers. However, we expect upside surprises to NIM expansion in the upcoming quarters and OCBC has not yet realised its NIM potential.

The recent property cooling measures are not expected to have a significant impact on the mortgage loans book for the rest of FY18. Loans growth guidance of high-single-digit is unchanged. Housing loans for the rest of FY18 are not expected to decline because of previous approvals for the drawdowns this year and management expects the slowdown of new origination of housing loans to begin only next year.

The management’s trade war outlook at the moment is cautious and would be more concerned if the war starts to impact on a broader macroeconomic level with countries such as Vietnam and Thailand that play a more active role on a global value. If the trade war escalates, countries will begin to focus on their own domestic market growth and this will affect capital flow and investment flow which will shrink the global economy.

In conclusion, earnings were boosted by robust loans growth, NIM expansion and low allowance. Upside in NIMs may be capped by Indonesia and Hong Kong’s inability to raise pricing.

Our rating has been upgraded to BUY with an unchanged target price of S$14.90. 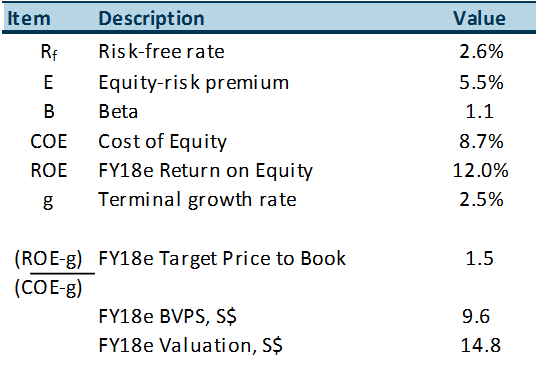