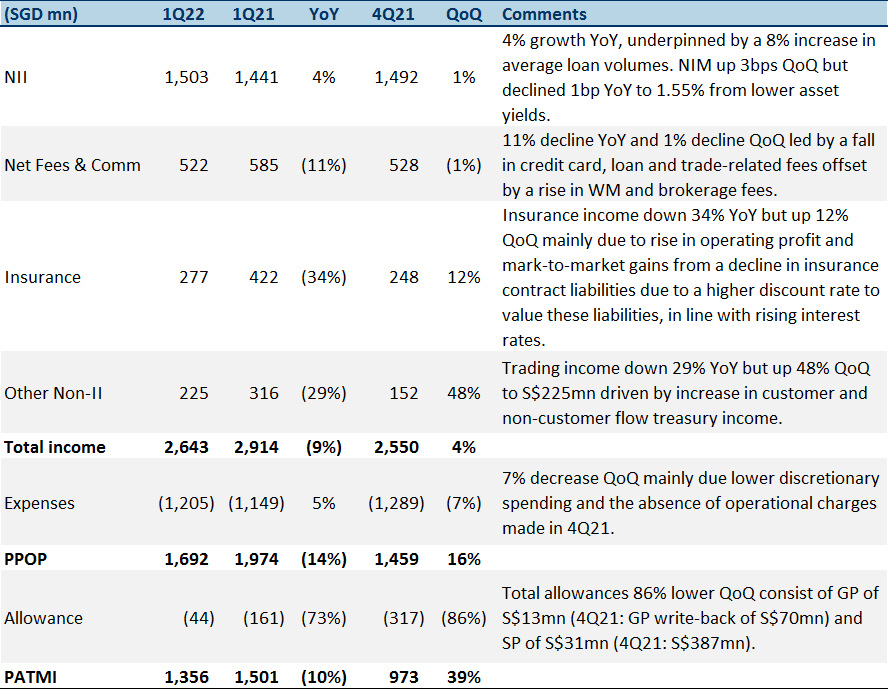 – Total non-interest income fell 23% YoY. The YoY decline was mainly due to lower WM fees, trading income and life insurance profit coming off the previous year’s high which was underpinned by robust customer and investment activities due to favourable market conditions. However, total non-interest income grew 8% QoQ to S$1.14bn mainly from growth in trading and insurance income. Fee and commission income fell 11% YoY and 1% QoQ due a fall in credit card, loan and trade-related fees which offset a rise in WM and brokerage fees. Trading income fell 29% YoY but grew 48% QoQ due to an increase in customer and non-customer flow treasury income. Insurance income fell 34% YoY but grew 12% QoQ due to a rise in operating profit and mark-to-market gains from a decline in insurance contract liabilities due to a higher discount rate to value these liabilities, in line with rising interest rates.

Loan growth: Loans grew 8% YoY in 1Q22 to S$294bn, meeting the bank’s guidance of a mid to high single-digit increase for FY22e. Management sees further lending opportunities in the wholesale segment and sustainable financing. Mortgage pipelines in Singapore and Hong Kong are also healthy, with more drawdowns expected in FY22.

Maintain BUY with an unchanged target price of S$14.22

We maintain our BUY recommendation with an unchanged GGM target price of S$14.22. We are keeping our FY22e forecast unchanged. We continue to assume 1.24x FY22e P/BV and ROE estimates of 9.3% in our GGM valuation. Catalyst includes lower provisions and higher interest income as economic conditions improve. A 100bps rise in interest rates can raise NIM by 0.18% and PATMI by 10%. OCBC is our preferred pick amongst the three banks due to attractive valuations, upside in dividend from the 15% CET 1 buffer and lower provisioning as the Indonesian and Malaysian economies recover.