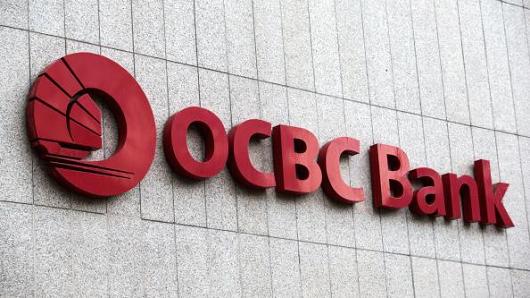 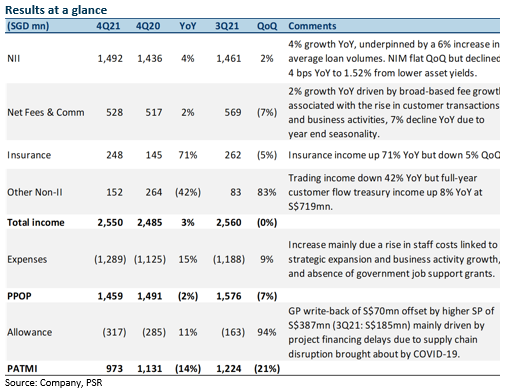 + Net interest income grew 4% YoY. NII grew 4% YoY and 2% QoQ led by loan growth of 8% YoY and 2% QoQ while NIMs remained flat QoQ at 1.52%. Loan growth was broad-based across both corporate and consumer segments, with the majority of the increase coming from Singapore, Greater China, and the Group’s international network. OCBC has guided  mid- to high single-digit loan growth for FY22e.

– SPs increased 109% QoQ. SPs of S$387mn were made during the quarter, which is 109% higher than 3Q21’s SPs of S$185mn. This increase was mainly driven by project financing delays due to supply chain disruption brought about by COVID-19. Management said that they are located mainly in Greater China and do not pose a systemic risk. However, OCBC was able to write back GPs of S$70mn during the quarter mainly due to downgrade of accounts to ECL stage 3 allowances, and refresh of the macroeconomic variables in the ECL model. Total NPAs rose by 2% QoQ and 8% YoY to S$4.3bn, but the group NPL ratio was stable at 1.5%. OCBC has guided credit costs of 20-25bps for FY22e compared with FY21’s credit costs of 29bps.

– Malaysia and Indonesia NPLs up QoQ. NPLs in Malaysia were up 8% QoQ to S$1.47bn while NPLs in Indonesia were up 17.5% QoQ to S$1.21bn in 4Q21. The increase was mainly due to loan moratorium extensions in both countries and the introduction of the PEMULIH relief package in Malaysia, where some loans under support were classified as NPLs. Nonetheless, management said that the increased NPLs in the two countries are customer- related and cover a broad spectrum of loans and are not trend-related.

Loan growth: Loans grew 8% YoY in 4Q21 to S$290bn, meeting the bank’s guidance of a high single-digit increase for FY21e. Management sees further lending opportunities in the wholesale segment and sustainable financing. Green and sustainable finance was up 66% YoY to S$23.3bn and now forms 8% of its loan book. Mortgage pipelines in Singapore and Hong Kong are also healthy, with more drawdowns expected in FY22.

NIM: Management has guided stable NIMs of 1.5-1.55% for FY22e. Nonetheless, it said that based on historical data, a 100bps increase in rates would lead to a 18bps increase in NIMs. Assuming rate hikes totalling 100bps this year, based on our calculations, our FY22e NII can climb S$725mn (or 11%) resulting in an increase in our FY22e PATMI by 10%.