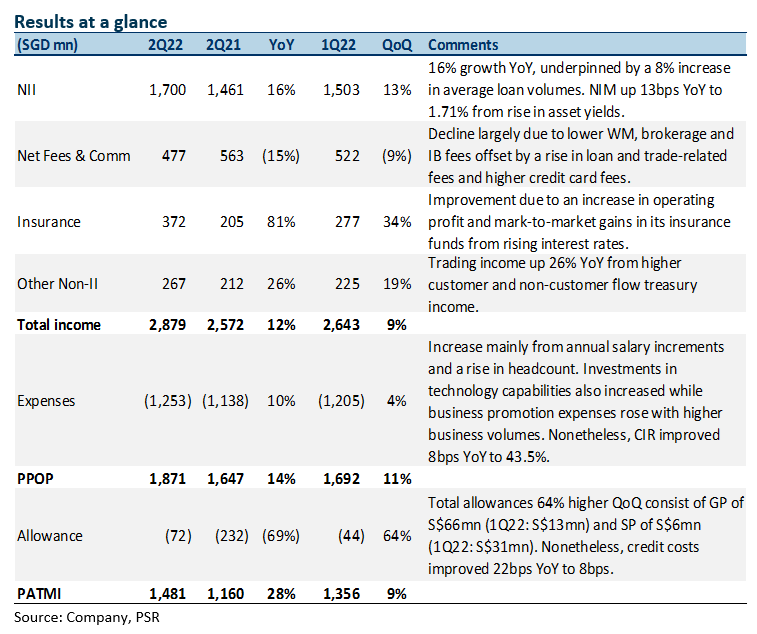 + Net interest income grew 16% YoY. NII grew 16% YoY led by loan growth of 8% YoY and NIM improvement of 13bps YoY to 1.71%. Loan growth was driven by Singapore, Indonesia, Greater China, USA and UK, and the building and construction and general commerce sectors, as well as consumer lending, including mortgages. NIM expansion was mainly due to asset yields outpacing higher funding costs amid a rapidly rising interest rate environment. OCBC has guided for mid-single digit loan growth (from mid to high-single digit) and NIM of 1.70% (from 1.5-1.55%) for FY22e.

– Fee income fell 15% YoY. Fee income declined 15% YoY to S$477mn mainly due to lower wealth management, brokerage and investment banking fees, in line with weaker investor sentiment globally. Nonetheless, loan and trade-related fees increased on the back of higher lending and trade volumes, and credit card fees were also higher during the quarter, in line with the broader reopening of economies and resumption of activities. Trading income increased 26% YoY to S$267mn mainly from higher customer and non-customer flow of treasury income, while insurance income soared 82% YoY to S$372mn due to an increase in operating profit and mark-to-market gains in its insurance funds from rising interest rates. On the whole, non-interest income saw an increase of 6% YoY and 3% QoQ to S$1.18bn.

Loan growth: Loans grew 8% YoY in 2Q22 to S$298bn, exceeding the bank’s guidance of a mid-single digit increase for FY22e. However, management said that it expects continued economic growth but at a slower pace due to the current economic environment. Management also sees further lending opportunities in the wholesale segment and sustainable financing. Mortgage pipelines in Singapore and Hong Kong are also healthy, with more drawdowns expected in FY22.