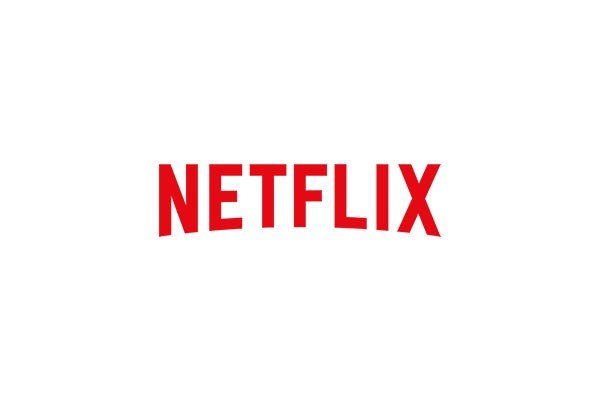 We Initiate coverage with an ACCUMULATE rating and target price of US$724.00 based on DCF valuation, with a WACC of 9.0% and terminal growth of 3%. 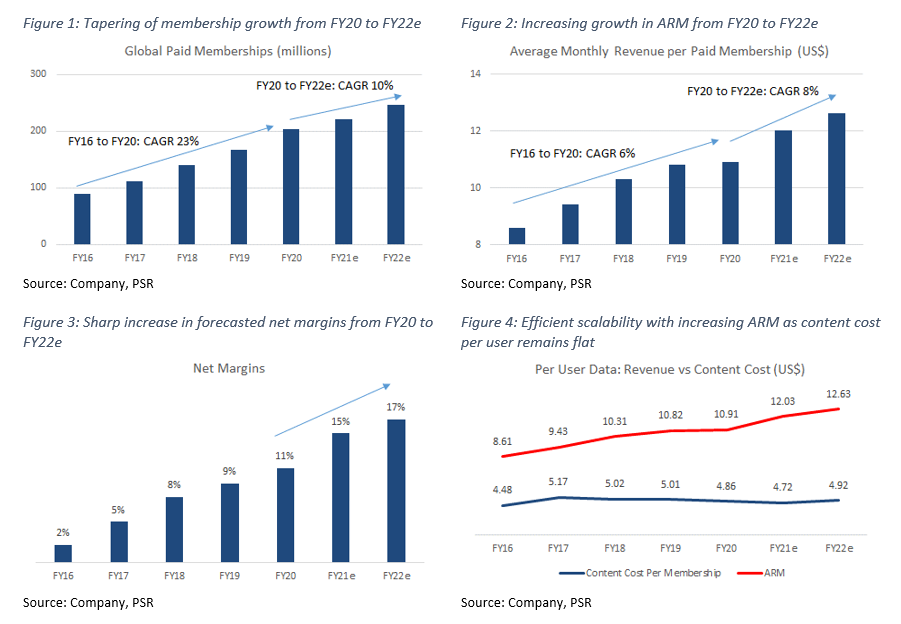 NFLX’s revenue for FY20 was US$25bn, 99% is derived from monthly membership subscriptions paid by customers for their streaming services. Revenue increased 24% YoY, bolstered by 22% growth in paid memberships. Gross profit came in at US$9.7bn, with PATMI of US$2.8bn.

Geographical Breakdown: UCAN (US + Canada) comprises 36% of global paid memberships, totaling 74mn memberships in end FY20 (Figure 5). We expect growth to slow significantly in this region to about 2% YoY, due to 1) increased competition from Disney+ and HBO Max, 2) re-opening headwinds for new subscribers.

EMEA (Europe, Middle East & Africa) and LATAM (Latin America) make up 33% and 18% of global paid memberships respectively, we expect paid membership growth in these regions to increase by about 10% YoY. APAC (Asia-Pacific) accounts for the remaining 13% with 25mn paid memberships. We do expect quite substantial YoY growth (24% FY21e) in this region, largely due to an increase in streaming opportunities in India. In terms of streaming revenue breakdown by geographical regions, UCAN totals 46% of streaming revenue, EMEA makes up 31%, LATAM 13%, and APAC 10% (Figure 6).

Growth Trajectory: We are very bullish on NFLX’s ability to continue on its growth trajectory, supplemented by healthy underlying business metrics in paid net membership additions and ARM. Streaming represents just 27% of US TV screen time, compared to 63% for linear television, and we expect this segment to grow relative to total screen time globally due to shifts in consumer behaviour. In addition, roughly 80% of Net Paid Additions in FY20 came

from outside of the UCAN region, reducing the reliance on ARM growth in the highly saturated UCAN region.

Quality Content: NFLX is also generating more value for its consumers by ramping up the content production in an effort to produce higher quality content for consumption – around 500 titles currently in post-production or preparing to launch, with plans to launch at least 1 new original film per week in FY21e. Testament to the quality of its content, NFLX original series and specials also received 129 Emmy nominations in Q2 FY21. Additionally, NFLX plans to add a new content category – gaming, to complement their main streaming business with an additional layer of interactivity. NFLX has also established itself as the premier streaming service amongst its peers, which we believe they are well equipped to maintain. We are also very positive about NFLX’s subscription pricing power, as the company was able to grow its paid membership numbers even with subscription price hikes in Q4 FY20.

Revenue Growth: NFLX registered gross profits of US$9.7bn in FY20, almost quadrupling gross profits of US$2.6bn in FY16, and a 26% YoY growth compared to FY19. PATMI for FY20 was US$2.8bn, and YoY growth of 48%, and with a 4-Yr CAGR of 96%. PATMI is expected to increase at a CAGR of 44% over the next 2 years due to increases in net margins (Figure 7). Revenue is expected to grow 18% and hit US$30bn by end of FY21e. We expect this to come from increasing YoY growth in Paid Memberships, as well as ARM. 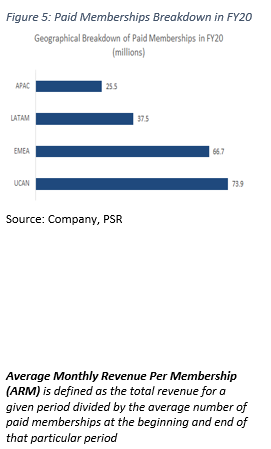 Cost of sales grew at a 20% CAGR from FY16 to FY20, slightly below revenue CAGR of 23%. Operating expenses include research and development (7% of revenue), sales and marketing (9%), and general and administrative (4%). Expense categories remain largely unchanged over the last 3 years, except for sales and marketing expenses, which decreased from 15% of revenue in FY18 to 9% in FY20.

Content cost was US$10.8bn in FY20 (or 43% of revenue), US$1.6bn less than FY19, largely due to disruptions in content productions caused by Covid-19. Content costs are expected to increase over the next few years, due to an expansion in content assets. Content costs are amortized based on each title’s contractual window of availability or an estimated useful life of 10 years, whichever is shorter.

Gross margins hit an all-time high of 39% in FY20, up half a percent from FY19. Gross margins over the last 5 years seem to be on an upward trend, and we expect this to continue due to the increased scalability of the business.

Net margins in FY20 were 11%, up from 9.3% the previous year. Led by reduced operating expenses as a percentage of revenue, partially offset by an increase in tax. Similar to gross margins, we do expect net margins to increase significantly into the 15-17% range moving forward, on the back of their ability to scale effectively.

Assets: Cash and cash equivalents increased by about US$3bn YoY in FY20, largely due to increased cash flow from operations, partially offset by a reduction in debt issuance. Content assets increased marginally by almost US$1bn YoY, but we do expect a significant increase moving forward due to continued investments in quality content assets. Plant, property, equipment and intangible assets almost doubled in FY20, led by the increased capital expenditure of US$498mn.

Liabilities: Total liabilities increased slightly from US$26.4bn in FY19 to US$28.2bn in FY20, largely due to the issuance of debt in FY20. We expect total liabilities to decrease over time as the company begins to pay off its accumulated debt of around US$16bn.

Free Cash Flow (FCF) in FY20 was US$1.9bn (Figure 9), marking the first time NFLX has returned positive FCF for a financial year. We consider it an important milestone for NFLX to enable the company to self-fund growth moving forward. We do expect NFLX to continue this positive FCF trend based on increased operational efficiency.

NFLX uses a subscription-based business model with three main price plans – ranging from US$2-24, providing customers with access to video on demand (VOD) streaming services. NFLX also provides cheaper mobile-only price plans available in the APAC region, targeting customers who only have mobile phones at home. The company has high upfront costs related to: 1) content licensing, and 2) production of NFLX Original content. Distribution costs are relatively low as they leverage the use of the Internet to reach its customers. The company’s main objective is to deliver value for its customers through streaming services, at an affordable price point.

NFLX has been changing the way households consume traditional media, giving consumers the choice to move away from linear TV, towards a more flexible entertainment option like VOD streaming. It has also recently begun adding gaming content to complement its TV series and movie features.

The company has been actively investing in higher quality content assets to ensure services provided are of the very best in terms of quality and innovation – growing its content assets on its balance sheet 2.5x since FY17. NFLX also has shown strong purchasing power, adding users globally YoY while raising prices at the same time. Macro shifts in how people consume entertainment – moving away from traditional media, could provide a constant tailwind for NFLX’s customer acquisition efforts.

Currently, it is estimated that the streaming industry occupies about 27% of total US TV time, compared to 63% for linear television (Figure 12). We expect these numbers to slowly even out over the next few years as the popularity of VOD streaming picks up. The total addressable market for VOD streaming is expected to increase at a 9% CAGR over the next 5 years – US$71.5bn in FY21e to US$108.7bn FY25e (Figure 10). NFLX’s main competitors in the streaming sector are Amazon Prime Video, Disney+, YouTube, Hulu, and HBO Max (Figure 12).

Discounting Amazon Prime Video numbers – due to the nature of Amazon Prime subscription which are purchased primarily for premium e-commerce functions and not VOD streaming, the closest competitor would be Disney+ with 116 mn paid memberships, slightly more than half of NFLX’s 209 mn (Figure 11).