Netflix Inc’s revenue comes from monthly streaming subscriptions (99%), ranging from US$8.99 for a basic plan to US$15.99 for a premium. It derived a majority 46.7% of its streaming revenue from the U.S. and Canada (UCAN) in 2Q2020. UCAN contains its largest subscriber base and delivers its highest average revenue per user (ARPU). Its second-largest market is Europe, Middle East and Africa (EMEA), at 31.1% of revenue. This is followed by Latin America (LATAM) and Asia Pacific (APAC), at 12.9% and 9.4% respectively.

This testifies to the success of Netflix’s targeted strategy of streaming regional content and partnering regional channel providers. We believe its strategy of lower-priced mobile-only subscriptions will continue to attract subscribers in APAC, which is currently its highest-growth market. This strategy worked in India and we foresee similar success in replication in other APAC countries with similar characteristics such as lower income and higher mobile-streaming usage.

2. Large pipeline of content to retain and drive subscriptions. Netflix has 459 brand-new 2020 releases in its content library, almost double that of Prime Video and dwarfing that of its other competitors (Figure 2). As almost all its content (98%) is exclusive, we believe this large pool of fresh content is well-positioned to retain and drive subscriptions. Netflix anticipates that the total number of its Originals for 2021 will still be higher than 2020. This suggests that delays in content production caused by Covid-19 will be short-lived and should have minimal impact on its churn rate.

3. A huge lead over subscription video on demand (SVoD). While Netflix continues to face competition in the SVoD market, this market is not a zero-sum game. Consumers are able to subscribe to different streaming services for differentiated content at reasonable pricing (Figure 3). Netflix also has a strong lead over its global competitors, with 62% more subscribers than the second-largest streaming player – China’s iQiyi. This puts it way ahead of the competition (Figure 3). By investing in localised and differentiated content, Netflix has been adding subscribers despite new entrants such as Apple TV and Disney+. This can be attributed to its large international presence which allows it to form partnerships with channel providers for content distribution.

ii. Constant need for differentiated content to attract subscribers. Netflix constantly invests in the production of differentiated content, which will likely weigh on its FCF in the next few years. Currently, this is less of a concern as its paid subscribers are growing faster than its content spending (Figure 5). Risks may surface if the reverse occurs. 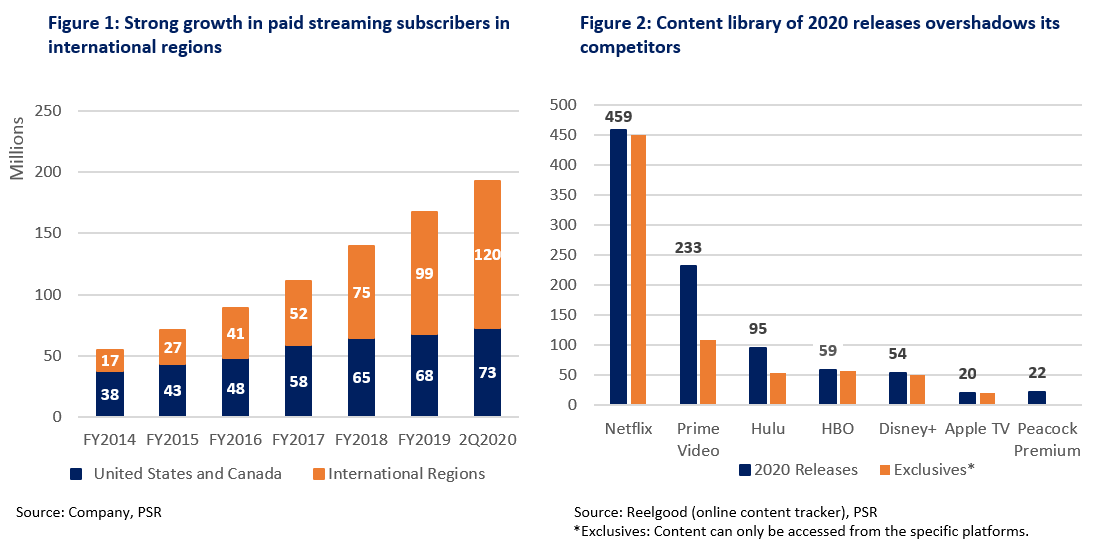 Netflix (US: NFLX) displays a strong uptrend. Based on recent technical actions, its potential to break a higher high in the long term is high after a correction.