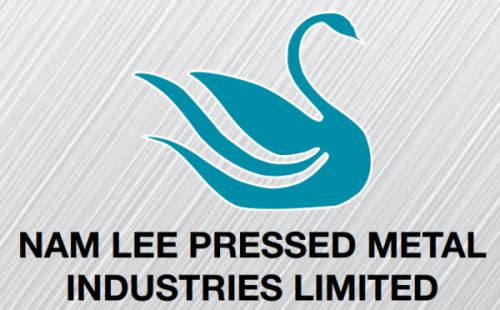 FY16 was a weaker year for Nam Lee Pressed Metal Industries (Nam Lee), with 21% lower revenue and consequently 29% lower PATMI. Despite the weaker year, gross profit margin was defended at 21.6% (FY15: 22.7%), – which we believe to be due to product mix being maintained. Revenue contribution from the highest margin Aluminium segment was maintained at 83% (FY15: 86%). We note that the twenty largest shareholders now hold 76.71% of the outstanding shares – the highest in the most recent three financial years (FY15: 76.42%; FY14: 76.69%; FY13: 76.75%) – with new institutional interest among them.

We attended Nam Lee’s FY16 Annual General Meeting (AGM) that was held on 26 January 2017. We left with a better understanding of the capital budgeting and capital structure decisions and business plan.

Management shared that the expected capital expenditure (capex) for FY17 is S$15 million to S$20 million. The bulk of the capex is towards setting up its sixth factory in Malaysia, to support HDB projects for steel and aluminium products and a new product line. The use of FY17 capex is for land and construction cost for the new factory in Malaysia (S$10 million) and for new and replacement machinery across the Group (S$5 million to S$7 million).

Management was asked on plans to consolidate the operations in Malaysia, and cited reasons such as country, political and labour concentration risk for not doing so. In addition, certain customers require redundancy in Nam Lee’s production supply chain to ensure uninterrupted delivery of products.

Management shared that the rationale behind the cash hoard (just under half of market capitalisation), is due to the major customer requiring them to have a strong balance sheet, as a condition to contracting Nam Lee.

Shareholders gave two suggestions on returning cash to shareholders – by actively buying back shares and by paying an interim dividend. In theory, the intended outcome of a share buyback programme is to give shareholders an opportunity to exit from their investment, while at the same time increasing the earnings per share (EPS) of the company by reducing the number of outstanding shares. We believe that an aggressive share buyback programme might not be in the best interest of the remaining shareholders in the case of Nam Lee, as it would exacerbate the already low trading liquidity of the stock. A share buyback programme would probably be more effective on a stock with a larger number of outstanding shares and a healthy trading liquidity. We believe that the introduction of an interim dividend would be a shareholder-friendly change, which could lead to better investor interest in the stock.

Management shared on revenue recognition for the year: (1) demand from major customer of speciality aluminium product to be maintained, (2) the Group will be recognising 80% of revenue for a public infrastructure façade project and (3) other ongoing smaller HDB projects will continue to contribute to the Group.

We have changed our valuation method since our last report and the assumptions are explained overleaf. The current price of S$0.37 gives an implied FY17F dividend yield of 5.4% and our target price gives an FY17F forward P/E multiple of 12.4x and an implied FY17F P/B multiple of 0.93x. Current-asset value per share (current assets minus total liabilities) of S$0.358 should be a floor to the downside, while dividend yield is attractive.

We are changing our cash flow model from a dividend discount model (DDM) to discounted free cash flow to equity (FCFE) model.

We had previously valued Nam Lee using a DDM, on the assumption that a large proportion of cash on the balance sheet would be paid out as dividends. However, management has stated that the cash would not be paid out excessively, as a strong balance sheet is required in order to be awarded the contract from its major customer.

Management stated that its aim is to pay a stable dividend. Nam Lee’s dividend policy is a payout ratio of a third of earnings (inclusive of special dividends). We have adjusted our dividend assumptions downwards, maintaining a payout ratio of about 50% going forward, which is in line with the last three FYs. 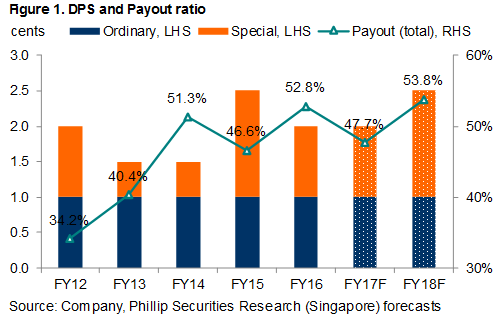 Following the downward adjustment to our dividend assumptions, a DDM is no longer suitable to value Nam Lee, as it would not assign any value to the cash that is being retained on the balance sheet. A FCFE valuation would account for all cash that is available to equity holders – both cash that is paid out as dividends and cash that is retained on the balance sheet. We have adjusted our FY17F capex assumption higher to S$17 million (from S$5.5 million previously), following guidance given at the AGM. Our capex assumption from FY18F onwards has been raised to S$6.5 million. We have also added a small-firm premium to our previous cost of equity. 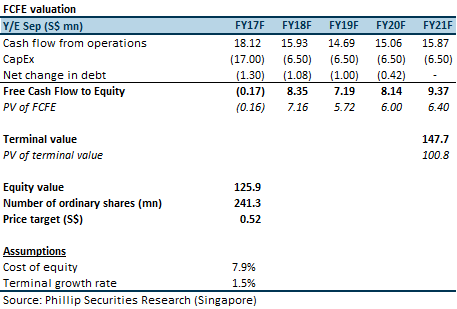