mm2’s core business is film, TV and online content production, distribution and sponsorship. It produces only content that is fully funded by film and content investors, which affords it a degree of defensiveness. With a fully funded pipeline of 20 titles for FY22 vs 14-18 titles in pre-Covid years, the group sees a steady recovery from Covid.

a.)Estimated timeline. No timeline has been announced. An EGM for approval is likely to be held in early March. If approved, the new shares could be listed by mid-April 2021.

c)Conditions. These include EGM approval. The underwriting agreement includes an extension of the maturity for its S$47.85mn convertible bond to 31 December 2021, as announced on 21 January 2021.

d)Purpose. Proceeds will be used to repay a S$51.75mn medium-term note due on 27 April 2021 and for general working capital and operations.

The rights issue will help mm2 de-gear its net debt of S$253.2mn as at September 2020. The next phase of de-gearing is a proposed listing of its cinema business under mm Connect Pte Ltd. Assuming an IPO or spin-off in-specie the S$47.85mn convertible bond would turn into equity. Another S$75mn of debt (or half total debt) in its cinema business could also be de-consolidated. After the rights issue and cinema listing, mm2’s net debt could shrink to around S$75mn.

At the current share price, the market cap of mm2 would be S$153mn after the rights issue. mm2’s 76.88% stake in UnUsUaL Ltd (UNU SP, Not Rated) alone is worth S$130mn. In addition, mm2 shareholders would have the opportunity to receive “free” cinema shares in a listing. On the existing film production operations, mm2 mentioned that it has a strong pipeline of over 20 titles for release in FY2022, compared to the typical 14-18 in previous years. 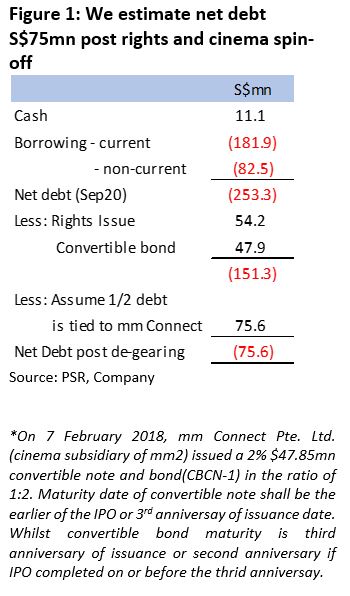 What does it mean?

Melvin Ang, Founder, Executive Chairman, has expressed his intention to vote for the rights and subscribe to his entitlement, flagging his support for and commitment to mm2.

All developments are proceeding concurrently and independently.