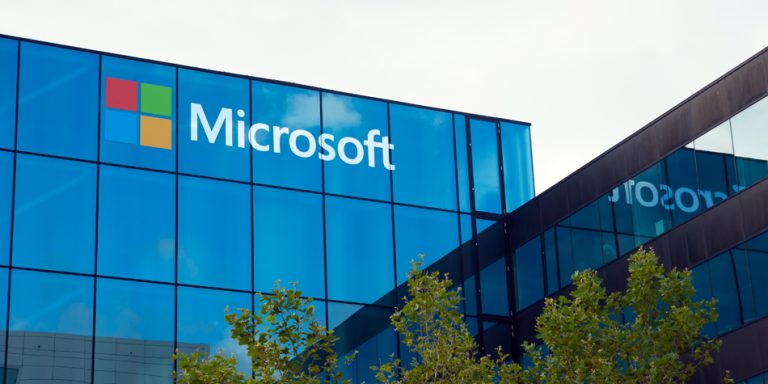 Microsoft (MSFT) offers software and cloud-based solutions to enterprises and consumers, as well as hardware comprising laptops and gaming consoles. Its revenue segments are Productivity and Business Processes (32% of FY21 revenue), Intelligent Cloud (36%) and More Personal Computing (32%). The US contributes 50% of MSFT’s revenue.

We initiate coverage with a BUY rating. Our target price is US$405 based on a DCF valuation with a WACC of 6.2% and terminal growth of 4.0%

Microsoft has three revenue segments: Productivity and Business Processes (32% of FY21 revenue) comprising revenue from commercial Office products and LinkedIn; Intelligent Cloud (36%) including revenue from Azure, server and cloud services and other enterprise services; and More Personal Computing (32%) consisting of revenue from the Windows operating system, search advertising, device sales and gaming. The US contributed 50% of FY21 revenue, with the remainder coming from other countries.

Total revenue expanded at 13% CAGR in the past five years (Figure 1). Growth was driven by commercial Office products and Azure which grew at 59% and 12% CAGR respectively in the past three years (Figure 2). We expect these two segments to continue strong growth as MSFT’s vast installed base moves to the cloud, and cybersecurity, economic recovery and price increases provide tailwinds for MSFT’s software licenses.

Cost of sales and total operating expenses grew 10% and 7% CAGR respectively in the past five years. Cost of sales was 31% of FY21 revenue, while Sales and Marketing (12%), General Administrative (3%) and Research and Development (12%) made up operating expenses. All expenses have grown at a slower rate than revenue over the past five years, leading to improved operating and gross margins.

Operating margins improved from 30% to 42% in the past five years as revenue growth outpaced expenses. Operating margins from Productivity and Business Processes are at a five-year high of 45%, up from 38% in FY17, driven by growing Office 365 commercial seats at 24% CAGR and rising ARPUs at 4% CAGR. Similarly for Intelligent Cloud, operating margins are up from 33% to 43% over the same period.

Assets: Fixed assets have grown 25% CAGR in the last five years to US$62bn (Figure 3) in FY21 as MSFT expanded its data centre portfolio. Fixed assets have risen from 10% to 19% of total assets in the period. Goodwill has also grown 23% CAGR to US$50bn following acquistions in LinkedIn and others in areas of cybersecurity, cloud and artificial intelligence.

Liabilities: MSFT has a net debt of US$44bn. Net debt has fallen over the years even as fixed assets have grown (Figure 3).

As of FY21, we estimate 70% of MSFT’s revenue is recurring and derived from subscription models.

Office commercial products were 24% of FY21 revenue. They grew at 12% CAGR from US$24bn to US$40bn between FY17 and FY21, driven by a 24% CAGR rise in Office 365 commercial seats to 300mn and a 4% CAGR in ARPU to US$100. ARPU spiked 7% in FY21 (Figure 9), the fastest in three years, driven by higher demand for premium licenses. This has been attributed to cyberattacks in 2021 driving demand for MSFT’s higher-end security offerings, and increasing need for General Data Protection Regulation (GDPR) compliance in the European Union driving demand for MSFT’s higher-end compliance offerings. The major cyberattacks in 2021 included SolarWinds (US$18mn ransom), Microsoft Exchange, the Colonial pipeline (US$5mn), and the JBS meat processing plant (US$11mn) hacks. In FY21, MSFT’s highest-end E5 license user base as a percentage of MSFT’s total commercial Office 365 user base rose from 5% to 8%. Commercial Office 365 seat growth (Figure 9) is also being supported by continued economic recovery driving demand from small and medium businesses. We expect productivity and business processes revenue to grow 17% in FY22e, slightly higher than the five-year historical average of 16%.

Azure’s revenue, estimated to be 18% of FY21 revenue, is mainly derived through infrastructure-as-a-service (IaaS) and platform-as-a-service (PaaS) consumption-based services charged on a pay-as-you-go basis, and per user-based services through the Enterprise Mobility + Security licenses (Figure 10) which allow users to access MSFT applications via multiple devices securely. Azure is MSFT’s fastest growing business with revenue growing at 66% CAGR in the last five years. It is expected to grow 41% in FY22e as it remains a popular choice among global enterprises adopting cloud computing who are already clients of MSFT servers and software. Operating margins have also steadily improved from 33% to 43% from FY17 to FY21.

Azure’s strength also lies in its hybrid cloud focus. According to the RightScale State of the Cloud report 2019, hybrid cloud is the dominant enterprise strategy, with 58% of respondents stating that they prefer using private/on-premise cloud together with public cloud and not rely on the public cloud in totality. They need the private cloud for data sovereignty/regulatory challenges, and network challenges where they may not have enough bandwidth or don’t want to rely on internet connectivity for workloads to run. Microsoft Azure’s capability in hybrid cloud is superior to AWS and Google Cloud Platform and therefore captures this market more.

Revenue from More Personal Computing grew at a modest 6% CAGR in the last five years, however operating margins have markedly improved from 15% to 36%. We believe this is due to stronger growth in the higher margin Windows, Search Advertising and Gaming segments, which grew 6%, 10% and 11% CAGR respectively compared to a decline in revenue from Devices of 3% CAGR.

Cloud computing. Gartner forecasts end-user spending on public cloud services to reach US$396bn in 2021, and grow 22% to reach US$482bn in 2022. Additionally, Gartner predicts public cloud spending by 2026 will exceed 45% of all enterprise IT spending, up from less than 17% in 2021. AWS currently holds a 33% share of the cloud infrastructure services market. It is followed by Microsoft Azure at 20%, and Google Cloud Platform at 10%. Azure’s market share has increased from 10% to 20% between 2017 and 2021 as an installed base of enterprises have chosen Azure as their primary cloud vendor.

Productivity software. The global productivity management software market size was valued at US$43bn in 2020 and is expected to grow at a CAGR of 14% from 2021 to 2028, according to Grand View Research. The rising need to manage tasks and workflow among the business and swiftly growing advancements in the areas of Machine Learning and Artificial Intelligence are the key factors driving market growth. Microsoft’s Office 365 is the clear leader with 89% market share in 2020 according to Gartner, with Google’s Workspace in second place with a 10% share. Other competitors for Office include software and global application vendors, such as Apple, Cisco Systems, Facebook, IBM, Okta, Proofpoint, Slack, Symantec, Zoom.

Higher-than-expected supply chain impact on Surface laptop and Xbox. Ongoing supply chain and chip shortages have led to MSFT being unable to meet demand for its laptop and gaming console hardware. Shortages have resulted in significant lead times and supply volatility and could come in worse than expected. Despite this, management has kept a strong forecast of between US$16.35bn and US$16.75bn for its More Personal Computing segment.

We initiate coverage on Microsoft Corp with a BUY recommendation. We have a DCF valuation of US$405.00 based on a WACC of 6.2% and a terminal growth rate of 4.0%, compared to the long-term average US GDP growth of 3.2%.

The Rule of 40 is a benchmark that measures the balance between growth and profitability for Software-as-a-Service companies. It takes into account revenue growth and EBITDA margin, the sum of which needs to exceed 40% to fulfil the rule.

The sum of MSFT’s three-year average revenue growth of 15% and EBITDA margin of 48% equals 63%, which fulfils the Rule of 40 criteria.