The outlook is stable. The long WALE of 9.6 years provides income visibility, and renewal risk is manageable with only 1.8% and 1.9% of leased area for renewal in 2018 and 2019 respectively. The recent acquisition of maincubes Data Centre in Germany will contribute positively from April 1 onwards. The current AUM stands at S$1.66bn and the Manager reiterated the target of growing it to S$2bn this year. The strategy of a long-term target gearing of 30% remains unchanged.

We like the growth story for the stock, but opine that valuation appears to be rich at an implied 1.44 times FY18e P/NAV multiple.

We had previously assumed the acquisition to be completed in the late part of 2Q 2018. Instead, the acquisition was completed at the end of 1Q 2018 and will have a full quarter contribution from 2Q 2018. We have adjusted our revenue assumption accordingly.

The balance 90% of the property was acquired with debt, making the acquisition yield-accretive. We had previously assumed an equity fund raising (EFR) in conjunction with the balance payment. We had assumed a 30-70 debt-equity capital structure for the acquisition. 30% is the long-term target gearing that the Manager has repeatedly articulated. 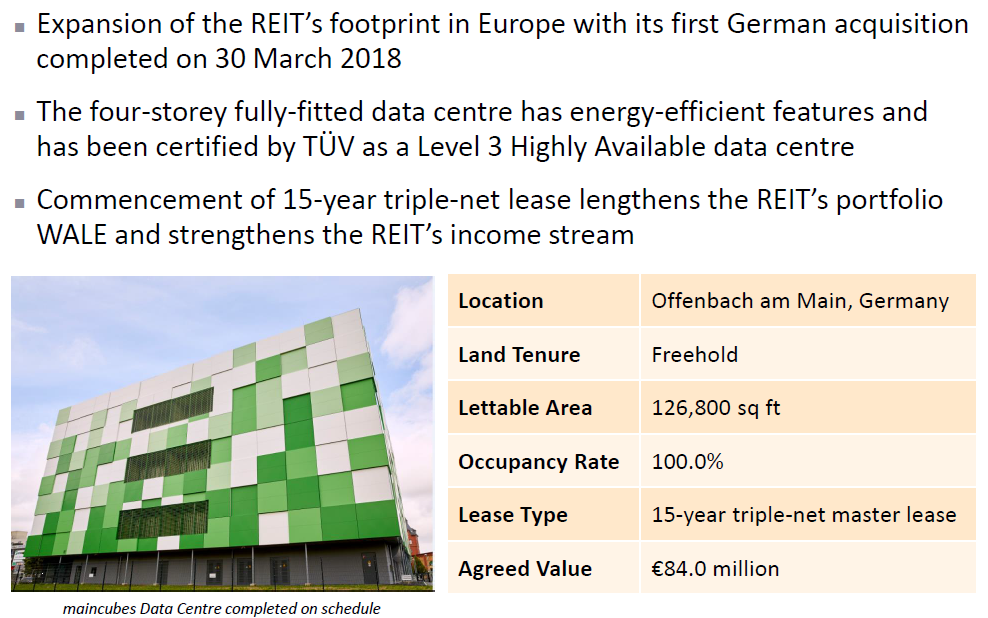 KDCREIT is relatively over-valued in terms of trailing P/NAV, in comparison to its Australia Stock Exchange (ASX)-listed peer, Asia Pacific Data Centre. KDCREIT is also trading at a tighter yield.