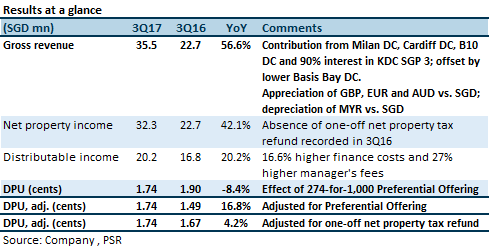 The possibility of an equity fund raising exercise soon is at the back of our mind. Current aggregate leverage of 32.1% is close to the historical high of c.32.5% after the acquisition of the Milan DC in October 2016. Shortly after, a Preferential Offering was completed in November 2016 in conjunction with the acquisition of KDC SGP 3. The price of KDCREIT has made a good run, and the current price is 1.41x P/NAV. The conditions are ripe to raise new equity with the next acquisition.