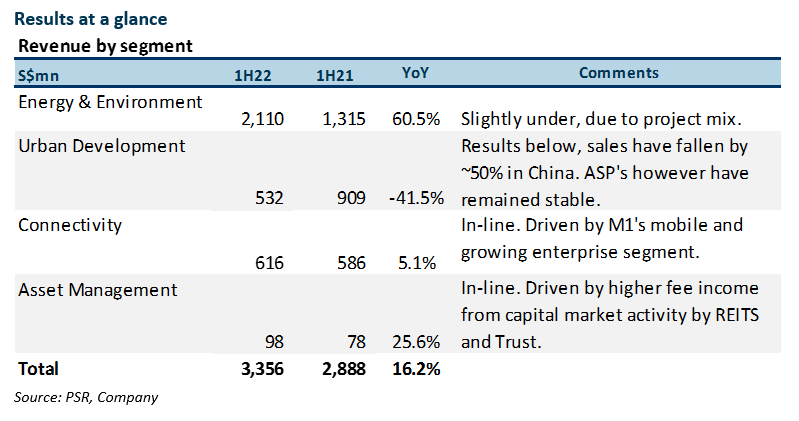 + 1H22 net profit below expectations, at 43% of FY22e profit but interim dividend exceeds expectations. Net profit of $498mn (+66% YoY) was slightly under our expectations as Urban Development dragged due to headwinds from China’s property market. Interim dividend of $0.15, came ahead of our expectations of $0.12, which we believe reflects management’s confidence in FY22’s outlook. We revise FY22e dividend to $0.33 from $0.29 with the payout ratio at 55% of earnings unchanged.

+ Bolder statement on transformation of Keppel Land. We welcome the management’s bolder statements on its plan forward for its Urban Development business. As part of its asset-light strategy, the Group has set out its plan to accelerate landbank monetisation in China and Vietnam in the next 1-2 years. We believe this can also be done through injections into Keppel-managed funds.

+ Headwinds in China property market weigh on Keppel Land’s China property sales. Keppel Land’s 1H22 China sales fell by ~69%, which is a steeper drop than most of the largest developers in the market, who have seen an average 50% drop (Figure 2). For FY22e, we do not expect any impairments for its China property business as ASPs have remained stable and the cost of its landbanks are also cheap. ASPs have largely held up as most of its projects are located in key cities across China. Its landbank, which have an average age of seven years, is also at a much lower price than the market value today.