Energy & Environment: Keppel O&M was profitable for 9M21, reversing the net loss from last year. Keppel O&M also achieved overheads reduction of over S$90mn in YTD 2021 and will continue to streamline its operations. With the recent rise in oil prices, management is seeing signs of improvement in the jackup rig market. Utilisation rates are improving and Keppel O&M has been receiving more enquiries on bareboat charters for its rig assets, though the sale of rig assets may take longer to materialise. The O&M net orderbook was S$5.5bn, up 67% from S$3.3bn at end-2020.

Urban Development: Keppel Land’s total home sales was stable at 810 in 3Q21 vs. 800 for the same period last year. 3Q21 revenue was softer due mainly to the impact of revenue recognition of completed properties during the period.

Connectivity: 3Q21 revenue growth driven by strength in data centres. Despite the drag of lower roaming and prepaid revenue on M1’s top-line, earnings for the quarter was higher YoY from the growing enterprise business.

+ On track to hit higher bound of S$3-5bn divestment target. Keppel has announced monetisation of over S$2.3bn in assets from October 2020 to July 2021 (Figure 2), and have completed about half of the transaction. The transaction between M1 and Keppel DC REIT is subjected to approvals and are expected to be completed by end of 2021. M1 is not expected to recognise any gains from this transaction and we expect the capital to be used to help M1 invest in new capabilities and also fund other growth initiatives like the Bifrost Cable System. 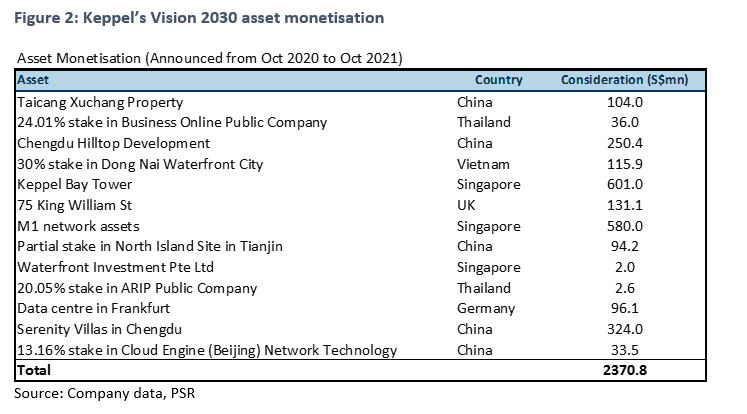 We believe Keppel is expected to surpass S$3bn in asset monetisation well ahead of its three-year schedule. Keppel is likely to exceed the S$3-5bn target by the end of 2023 that is set in its Vision 2030 plans. We believe Keppel will use the capital unlocked to invest in organic and inorganic growth plans and distribute some of the proceeds to reward shareholders.

+ No provisions to be set aside for lawsuit from EIG Global Energy Partners. The lawsuit brought against Keppel O&M was first served in February 2018. EIG Global Energy Partners is a leading provider of institutional capital to the energy sector globally. The court has, in May 2020, amongst other orders, dismissed part of the plaintiffs’ claims in that lawsuit. The management is of the view that there are many disputed facts concerning the plaintiffs’ claim for aiding and abetting fraud. On that basis, Keppel O&M’s US counsel is of the opinion that overall, Keppel O&M has very good defences to the plaintiffs’ claim. As such, Keppel will not be setting aside any provisions for the lawsuit.

– Rival offer for SPH from Temasek-backed consortium. With a new rival bid from a Temasek-backed consortium, Keppel may have to raise their offer bid for SPH. The consortium comprising Hotel Properties Ltd (HPL), businessman Ong Beng Seng, and two Temasek-linked entities, CLA and Mapletree, are proposing to acquire SPH at $2.10 per share in cash. The consortium vehicle, Cuscaden Peak, is 40% held by a HPL unit called Tiga Stars, 30% by Temasek unit CLA Real Estate Holdings and 30% by the Mapletree group. Property group Mapletree is also a Temasek-linked entity.

Pursuant to the terms of the implementation agreement, Keppel has the opportunity, within ten business days, to improve their current proposal and we expect an announcement soon.

With a new rival offer for SPH, we list down the list of possible scenarios that Keppel may undertake in response to the new competitive bid. Option 1: Keppel exercises “Switch Option” and returns with a revised offer. Under the Switch Option, Keppel will make the offer on the same or better terms as those which apply to the Scheme. We believe Keppel is well-positioned to enhance and unlock the value of SPH’s portfolio as the two companies are already partners in businesses such as M1, Prime US REIT (PRIME SP, TP: US$0.94) and the development of the data centre at Genting Lane in Singapore. We believe Keppel could return with another offer to reap the synergies from the acquisition.

In such a scenario, we believe the gearing could be pushed higher. Keppel had a net gearing of 0.76x as at end-Sept 21, we believe Keppel could propose another offer while keeping net gearing at ~1x. We see the possibility of Keppel doing a rights issue in order to keep gearing levels manageable.

Option 2: Keppel abstains from making another offer. It walks away from the deal and takes the $34mn break fee, which translates to about 1.86 Singapore cents earnings per share accretion.

Option 3: Competitive situation in the absence of any agreement between the parties as to any alternative procedure for resolving this competitive situation. The Auction Procedure, provided for by the Securities Industry Council will apply, in order to provide an orderly framework for its resolution.

Keppel previously announced they have received bids for its logistics business, which are currently being evaluated. We expect that a binding offer could take place before the end of the year.

Keppel O&M and Sembmarine (SMM SP, Non-rated) are in preliminary discussions on a potential combination. The timeline for the parties to reach an agreement has been extended to the 1Q22 from 4Q21. While nothing has been firmed up, we view the discussions positively as it provides better clarity on the fate of its O&M unit. With the overhang removed, along with the planned divestment of its logistics unit, we believe Keppel will be re-rated.

The proposed transactions are expected to be earnings-accretive for Keppel in the current financial year on a pro-forma basis, although there is no guarantee of completion by this year. The group’s net debt should fall as a result of the deconsolidation of Keppel O&M and receipt of part of the consideration from the merged entity. Distribution in specie of the merged entity will, however, reduce Keppel’s shareholders’ funds. Overall, net gearing is not expected to be much affected by the transactions.