Keppel has entered into revised agreements in connection with the proposed offshore and marine transactions. Under the revised structure and terms, Sembcorp Marine will now directly acquire 100% of Keppel O&M (excluding its legacy rigs and associated receivables) from Keppel. There will no longer be a Combined Entity, and the proposed one-for-one share exchange between the Combined Entity and SMM, and the transfer of SMM’s listing status to the Combined Entity. The exchange ratio between KOM and SMM is revised to 54:46 from 56:44.

In addition, changes have been made to the Asset Co transaction. Keppel, Baluran and Kyanite, will proceed with the transaction regardless of the outcome of the proposed combination of KOM and SMM. Reflecting the higher interest rate environment, the parties have agreed that the coupon for the $3.9bn in vendor notes to be received by Keppel will be raised to 4% from 2%.

Both Keppel and SMM are targeting to complete the proposed combination by the end of 2022. Keppel intend to seek shareholders’ approval for the transaction in early-December 2022. 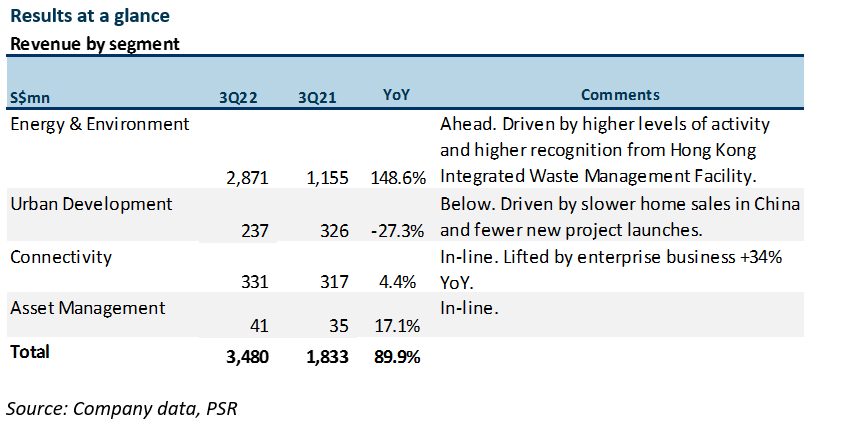 + Decoupling of Asset Co transaction provides greater certainty on the outcome of its stranded rigs. The delinking of the Asset Co transaction from the proposed combination simplifies the transaction structure and allow the Group to move ahead with its plans to resolve the legacy rigs and associated receivables, regardless of the outcome of the proposed combination. The higher coupon rate for the vendor notes will also yield an additional $79mn of additional interest per annum, or about $236mn to $393mn over three to five years.

+ Better certainty of deal completion. The revised transaction structure benefits SMM shareholders as the acquisition consideration is reduced by $387mn or 10% of its market capitalisation. There will also be a lesser dilution to its existing shareholders with 3.1mn lower new SMM to be issued. The reduced transaction complexity and third party consent requirments would cut the completion time by up to two months. This is because the acquisition of KOM by SMM now eliminates the requirement for a separate combined entity to be interposed as the listed entity holding both KOM and SMM. In other words, the new terms would only require majority approval by Keppel and Sembmarine shareholders, and court approval will no longer be required.

+ On track to exceed $5bn of asset divestment by 2023. Keppel will be divesting Sheshan Riviera in Shanghai for RMB967mn (S$196mn), taking total assets monetised since 2020 to $4.4bn. Keppel will exceed the $5bn target by 1Q23 should the proposed transaction for the divestment of KOM go through in Dec 2022 or Jan 2023.

The divestment of KOM will further transition the Group towards an asset-light structure. More importantly, the new enlarged SMM entity, which Keppel will hold 5% of, will be better equipped to compete against global well-resourced players from South Korea and China.

With changes made to the Asset Co transaction, we believe management can now forge ahead to further de-risk its legacy rig assets. Management disclosed that it continues to receive active enquiries for its legacy rigs on the back of a more favourable environment.