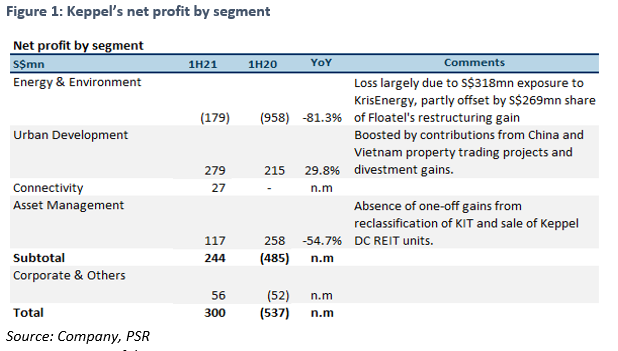 + Net profit ahead, boosted by S$269mn from Floatel’s restructuring gains. Net profit was a significant improvement over the net loss of S$537mn for 1H20, which was hit by a S$930mn impairments of its O&M business. The improvement was led by better showings across the segments except asset management, further boosted by gains from a reclassification of Keppel Infrastructure Trust (KIT) and sale of Keppel DC REIT units.

+ Keppel O&M turned EBITDA-positive in 1H21; net orderbook grew over 70% YoY. Keppel O&M generated a net profit of S$107mn {What is difference with table above?} in 1H21, from a loss of S$959mn a year ago. This year’s profit included the recognition of S$269mn from its share of Floatel’s restructuring gains. Despite increased manpower costs and Covid-19 manpower disruptions at its Singapore yards, Keppel O&M was EBITDA-positive. In 1H21, Keppel O&M secured S$3.1bn of new orders, including a floating production, storage and offloading (FPSO) P-78 contract and an FPSO topside fabrication project more recently in July. Net orderbook grew over 70% to S$5.7bn as at end-June 2021, from S$3.3bn in the same period last year.

– M1’s net profit 47.5% lower YoY from lower roaming and prepaid revenue. M1’s net profit of S$21mn was lower than its S$40mn in 1H20. This was mitigated by a divestment gain from its interest in Keppel Logistics (Foshan), following an agreement reached with the local authorities on Lanshi’s port-closure compensation and lower net interest expense.

Keppel O&M and Sembmarine (SMM SP, Non-rated) are in preliminary discussions on a potential combination. We expect some form of agreement in the fourth quarter of 2021. While nothing has been firmed up, we view the discussions positively as it provides better clarity on the fate of its O&M unit. With the overhang removed, along with the planned divestment of its logistics unit, we believe Keppel will be re-rated.

The proposed transactions are expected to be earnings-accretive for Keppel in the current financial year on a pro-forma basis, although there is no guarantee of completion by this year. The group’s net debt should fall as a result of the deconsolidation of Keppel O&M and receipt of part of the consideration from the merged entity. Distribution in specie of the merged entity will, however, reduce Keppel’s shareholders’ funds. Overall, net gearing is not expected to be much affected by the transactions.