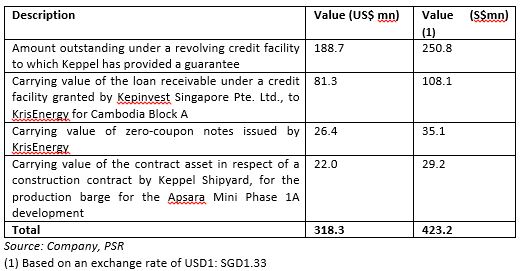 + Approaching final resolution for KrisEnergy. Keppel benefits from a comprehensive first ranking security package over the assets of the KrisEnergy group. In view of KrisEnergy’s filing of a winding-up petition, Keppel is now implementing detailed recovery plans to maximise recoveries.

KrisEnergy said it has not been able to propose an alternative restructuring plan to DBS, the provider of a US$200mn revolving credit facility, and Keppel, which bears the main economic risk of the revolving credit facility. Therefore, the facility will not be extended as stipulated conditions have not been met. DBS has cancelled total commitments under the facility and declared all loans now payable on demand.

Having evaluated the potential financial impact of the carrying values of its KrisEnergy investment as a result of these developments, Keppel will recognise a loss of S$318mn in respect of its exposures to KrisEnergy in its 1H21 financial results. The loss is measured by estimating the recoverable amounts of the various assets of KrisEnergy, less its obligations in connection with the revolving credit facility.

The estimated recoverable amount is S$105.2mn (S$423.2mn – S$318mn), which Keppel has assessed with professional advice. The recoverable amount and any further provision for losses will be re-assessed at the end of each subsequent financial reporting period.