Japan-Weekly Strategy Report With the “politics-driven market” settling down, time to close in on cheap stocks June 18, 2019 412 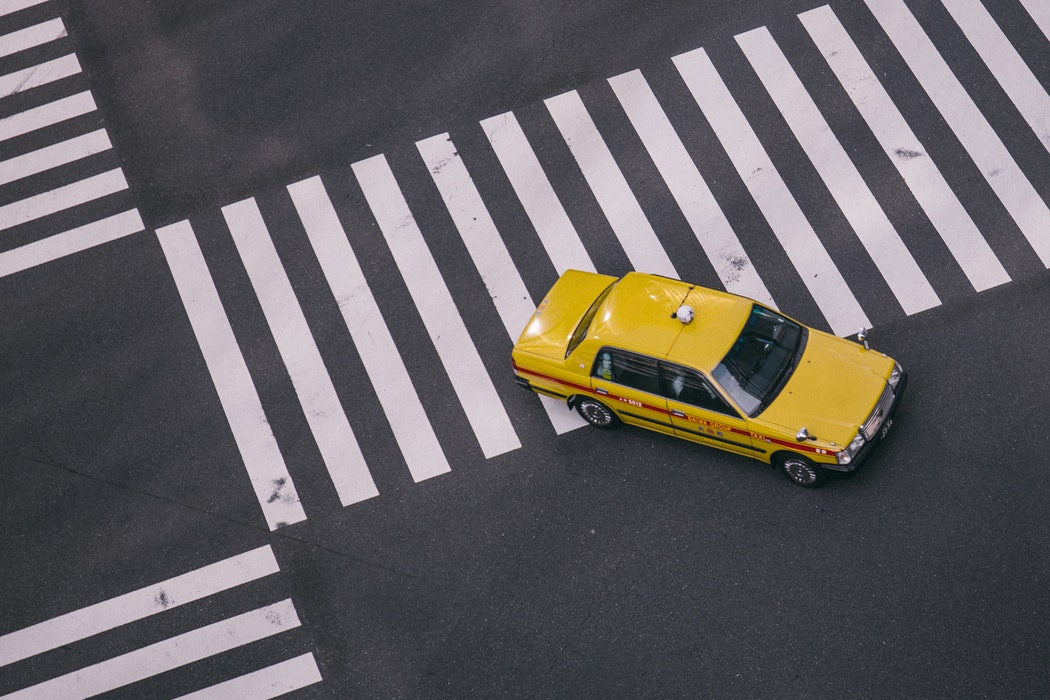 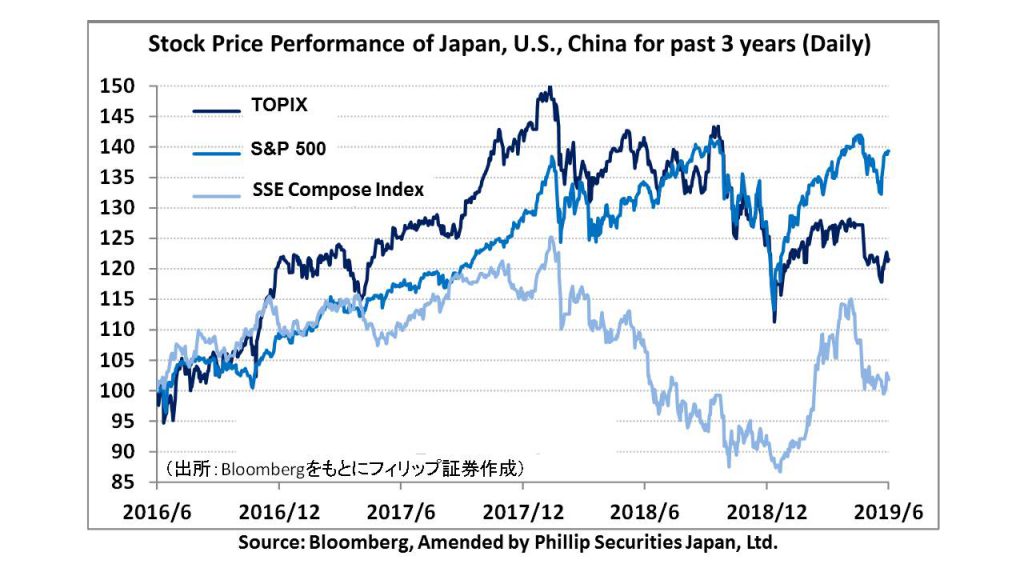 With the “politics-driven market” settling down, time to close in on cheap stocks

As a result of rising expectations of US interest rate cuts arising from US employment statistics announced on 7/6, and through the favorable response to announcement of an indefinite freeze on Mexican tariffs, the Nikkei average started above 21,000 points on 10/6, and rose to 21,259 points on 12/6.  However, as the calculation dates for the Special Quotations (Major SQ) for Index Futures Trading and Index Option Trading are expected to overlap on 14/6, there are concerns about the direction of market movements after that due date.  As a result, until 13/6, trades had been relatively thin. As stated in the 1/4 Weekly Report, a Nikkei average of 21,000 points is an important milestone for the market in the medium to long term.  In terms of fundamentals, the weighted average PBR (Price Book-Value Ratio) of the Nikkei average is a value that is readily noticed when the liquidation value falls below 1.0 times.  It may therefore be said that it is a suitable level for one to return to the starting point in preparation for the next market phase.

It was widely expected that the Abe administration would delay the consumption tax hike and dissolve the House of Representatives in preparation for the House of Councilors election scheduled for 21/7.  However, it now appears that the consumption tax hike will be implemented as scheduled in October, and it is increasingly apparent that a snap election dissolving the House of Representatives will not be held.  There are few expectations that a bull stock market can be recreated in a way similar to that in Autumn 2017 through a surprise snap election.  There are also concerns that a tax hike will adversely affect the economy. In response to last-minute surge in demands before the tax hike, the government has already prepared budgets for projects like “National Resilience”, “Cashless Settlement” and “Free Childcare”. We can expect domestic demand to support the Japanese economy, including labor-saving investments in response to labor shortages.

However, if the FSA’s estimate that “a person needs 20 million yen after retirement” is used politically from the perspective of the pension system and becomes an issue during the House of Councilors election, then there is concern that election results will not be favorable for the ruling party.  Regarding this point, let’s separate it from the pension system, and hope for discussions on the rationality of considering the usage of “Tsumitate NISA” and “iDeCo” from their early stages for asset formation.  In addition, with regards cheap stocks, shareholders may begin to demand at shareholder meetings that companies strengthen shareholder returns through share buybacks.  The market environment is expected to be subject to the future of “politics-driven market” situations and the uncertainty of the Japanese economy after the consumption tax hike. Nevertheless, this is the time to look at stocks perceived as cheap in terms of fundamentals. It is indeed a good strategy to hold on to long-lasting investment focus that will not be influenced by external factors. 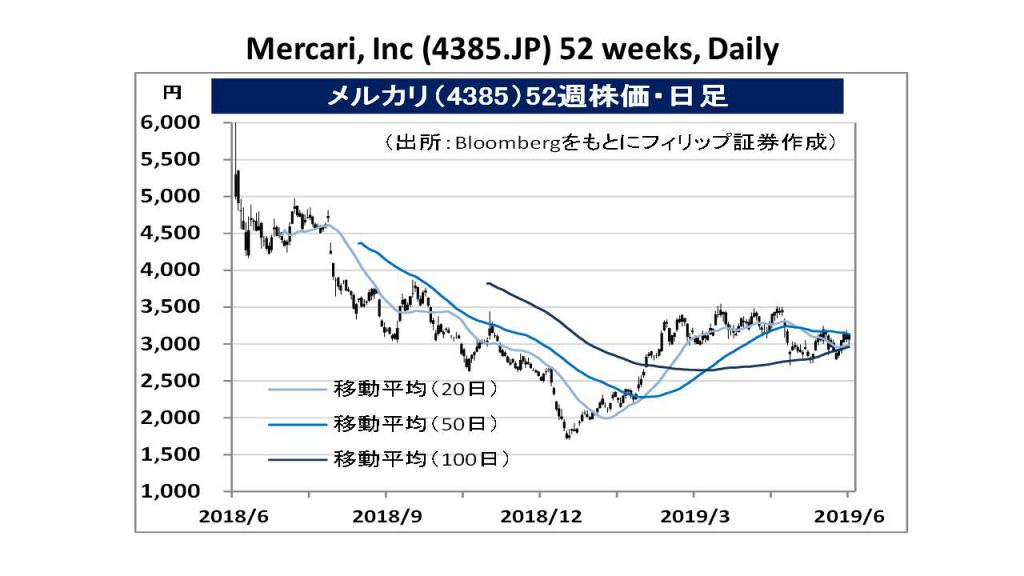 ・Established in 2013. Operates the “Mercari” market place for person-to-person (C2C) transactions based on smartphones.  Also operating Mercari JP (Japan), Mercari US (US) and “Merpay” for cashless settlements.

・For FY2019/6 plan, net sales is expected to increase by 39.8-45.4% to 50.0-52.0 billion yen compared to the previous year.  Announced on 13/6 to take the “Mercari” business out of business consolidation.  Total domestic GMV for Mercari US had increased by 70% to 103 million USD for the 2019/1-3 period compared to the same period the previous year. In the US, where “garage sale” practices have taken root, the potential for a “smartphone version garage sale” is expected to be huge.  We can therefore look forward to accelerated growth in US domestic GMV 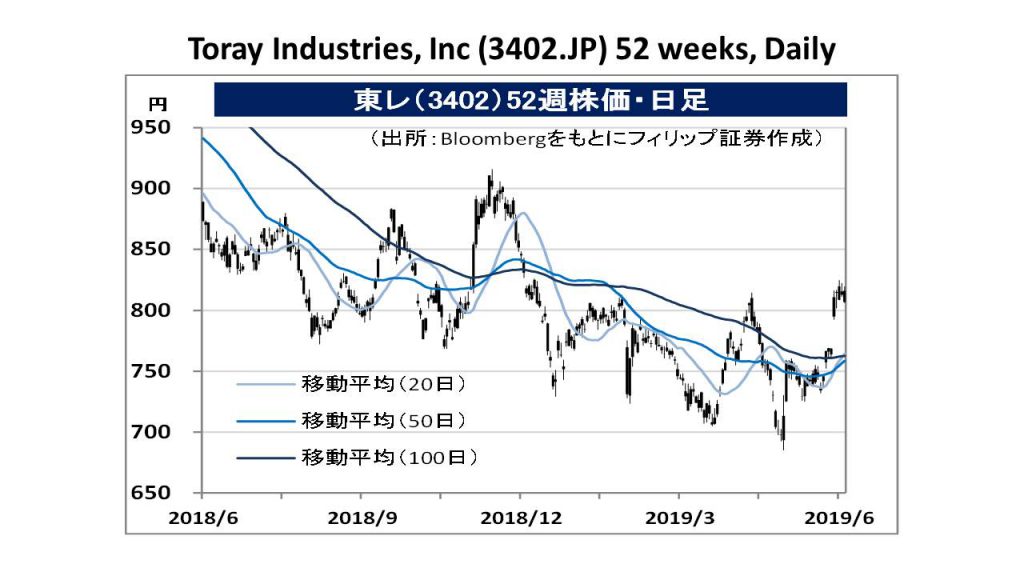 ・For FY2019/3 results announced on 14/5, net sales increased by 8.3% to 2.3888 trillion yen compared to the same period the previous year, operating income decreased by 9.6% to 141.469 billion yen, and current income decreased by 17.2% to 79.373 billion yen.  Was not able to transfer fuel price increases to product prices. Costs related to launch of new projects at the overseas composite subsidiary and acquisition-related expenses had also impacted performance negatively.