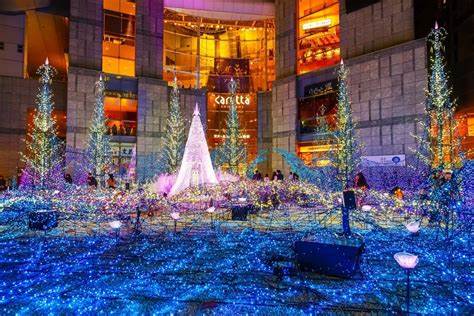 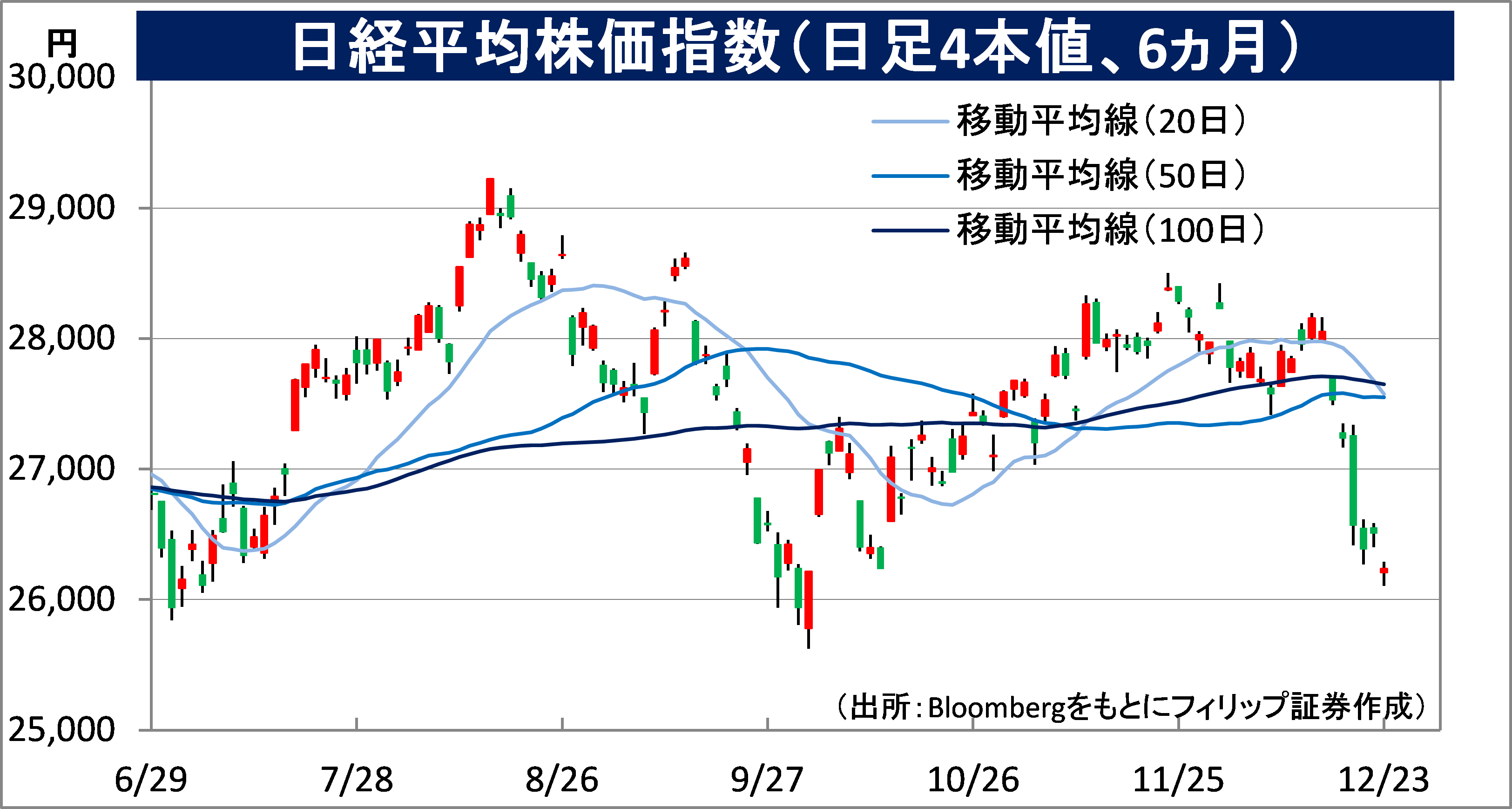 At its monetary policy meeting held on 19-20/12, the BOJ decided to revise its easing policy on a large-scale, increasing the allowable range of fluctuations in long-term interest rates from around 0.25% to 0.5%.  This is the first increase in the fluctuation range since March 2021, when it was raised from 0.2% to 0.25%.  The policy framework for allowing long-term interest rates to fluctuate was introduced in September 2016 as “Quantitative and Qualitative Monetary Easing with Long- and Short-Term Interest Rate Control”, and at the same time, an “overshooting commitment” was also introduced to continue monetary easing even if 2% inflation is reached over several months on a historical basis, while allowing some upward swing in inflation.  As far back as January 2016, “Quantitative and Qualitative Monetary Easing with Negative Interest Rates” was introduced, which applied a negative interest rate of -0.1% to a portion of BOJ current accounts held by financial institutions.

If short-term interest rates remain unchanged and long-term interest rates rise, this will directly affect the earnings of financial institutions, which will see their interest margins on deposits and loans expand.  Asset management yields of insurance companies are also expected to improve.  In fact, there is a correlation between the TOPIX bank stock index and the 10-year JGB yield, as shown in the section “Long-Term Interest Rates, Bank Stocks, and the Regional Bank System” below.  The 10-year breakeven inflation rate, which represents the expected inflation rate for the next 10 years, has also been generally in the range of 0.8-1.0% since April of this year, and 0.5% is likely to be below actual levels.  We should therefore pay attention to the fact that the expansion of the allowable range of long-term interest rate fluctuation in the near future may be abolished prematurely after the new BOJ governor assumes office.  Essentially, unlike short-term policy rates, which can be controlled directly by the central bank, long-term interest rates should reflect the supply and demand in the bond market.  If the bond market regains its original function, then there are possibilities of a further rise in long-term interest rates and an expansion of financial institution earnings.

In relation to the “2024 logistics problem” deadline (1st April, 2024), the response to the transportation capacity shortage is expected to be through unmanned delivery by drones as well as automated driving.  The ban on “Level 4” permits, which are for fully-automated driving under specific conditions such as driving routes, is scheduled to be lifted on 1st April next year.

・Established in 1970.  Main business is the development and sales of its own software for the surveying and civil engineering construction industries.  Operates a Public Sector segment for the surveying and real estate market and a Mobility segment related to automobiles and MaaS.  Strengthening automatic driving-related products.

・For 1H (Apr-Sep) results of FY2023/3 announced on 9/11, net sales decreased by 10.2% to 1.76 billion yen compared to the same period the previous year, and operating income decreased by 45.6% to 72 million yen.  Sales by business segment were down 3.1% YoY to 1.369 billion yen in the Public Sector segment and down 29.0% YoY to 385 million yen in Mobility.  Many projects require time from order receipt to delivery, and profits are expected to be recorded in the October-December period and beyond.

・For its full year plan, net sales is expected to increase by 9.8% to 4.6 billion yen compared to the previous year, operating income to increase by 24.3% to 320 million yen, and annual dividend to increase by 1 yen to 14 yen.  In June, a joint development agreement was signed with Tokai Rika, a Toyota-affiliated parts manufacturer, for a remote monitoring and operation system for automated vehicles, and in August, a collaboration agreement was signed for the introduction of automated buses between JR Komatsu Station and Komatsu Airport.  A 3D map verification experiment for setting the travel route of an automated vehicle was also conducted from 28/10-6/11. 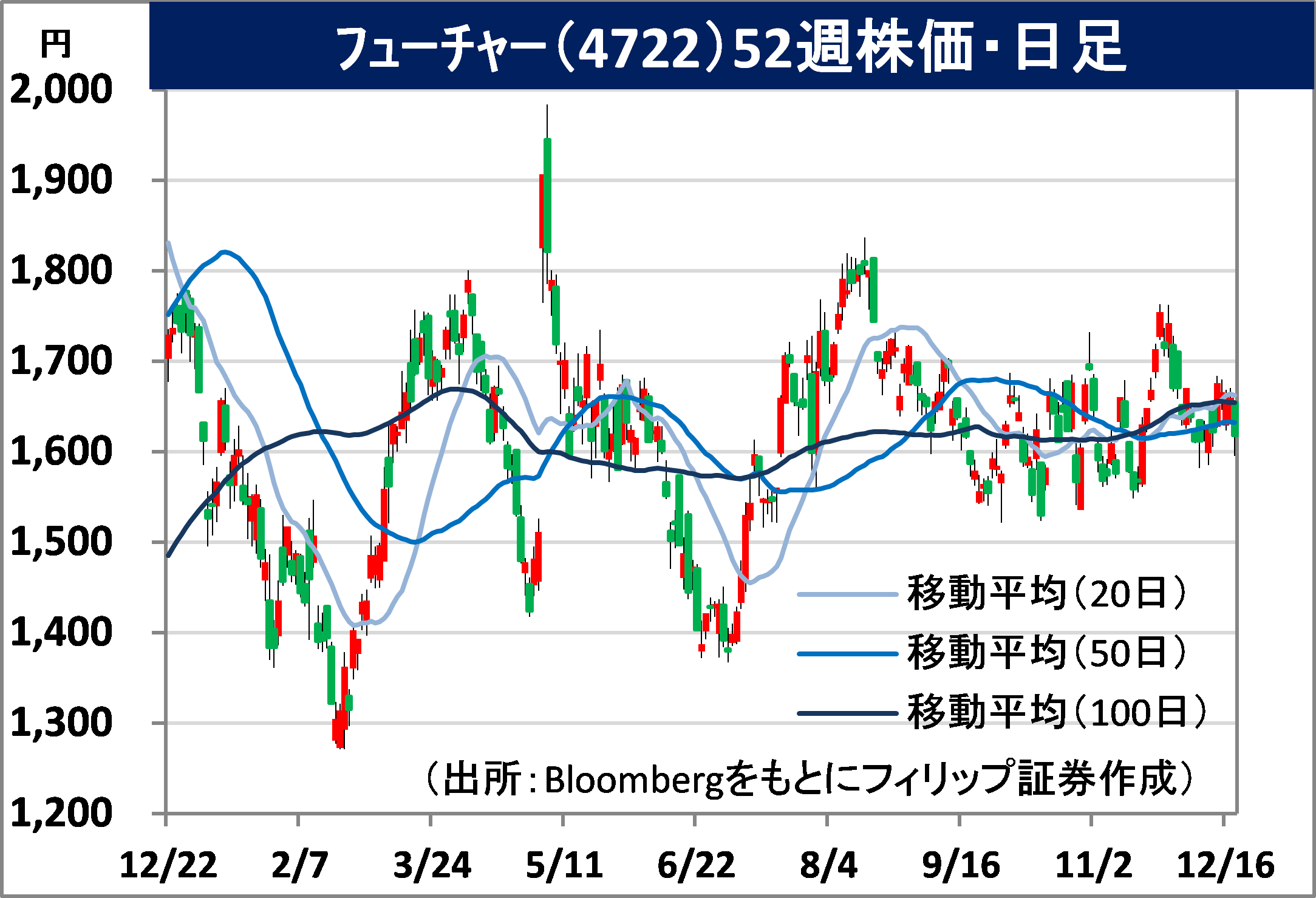 ・Established in 1989.  Mainly involved in the digital transformation (DX) of client companies, focusing on business systems, and also operates an IT Consulting & Services business as well as a business innovation business.

・For 9M (Jan-Sep) results of FY2022/12 announced on 26/10, net sales increased by 10.7% to 39.614 billion yen compared to the same period the previous year, and operating income increased by 43.0% to 9.361 billion yen.  The IT Consulting and Services business, which accounts for 85% of total sales, saw steady progress in large-scale projects from a wide range of client companies that contribute to strategic, medium- to long-term growth, resulting in a 60% increase in operating income YoY.

・For its full year plan, net sales is expected to increase by 14.0% to 55.5 billion yen compared to the previous year, operating income to increase by 33.3% to 12.0 billion yen, and annual dividend to increase by 8.5 yen to 34 yen after adjusting for stock split.  Future Architect, a subsidiary, introduced “FutureBANK”, a loan support system, to a number of member banks of the “TUBASA Alliance”, a framework for wide-area collaboration involving 10 regional banks, including Chiba Bank.  A project to introduce next-generation banking for regional financial institutions is currently underway.