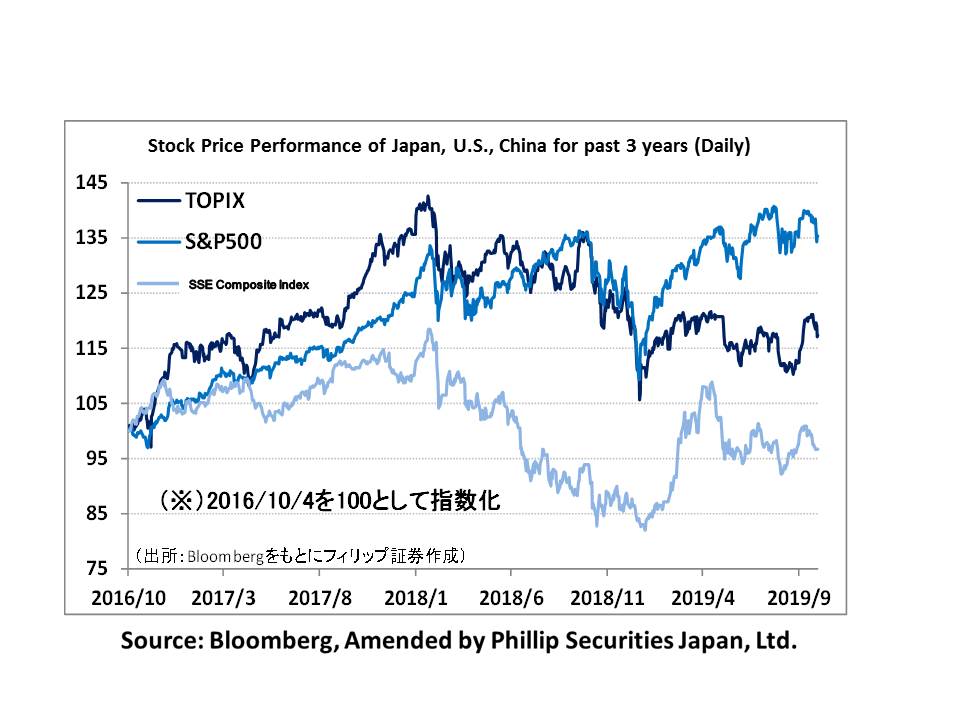 Watch out for Movements That Seek “Experiential Value”

The Japanese stock market in the week of 30/9 saw the Nikkei average fall under 22,000 points from the start of the week due to news of the US administration considering restricting security investments to China on 27/9, as well as the significant fall in US semiconductor-related stocks as a result of a worsening forecast of business performance and the Jun-Aug term financial results of the US Micron Technology (MU) on 26/9. In addition, following the fall in US stocks due to a worsening of the US ADP National Employment Report (September) announced on 2/10 and the US Manufacturing ISM Report on Business (September) announced on 1/10, the Nikkei average fell to 21,276 points on 4/10.

In the Japanese economy, despite the Indices of Industrial Production (August) announced on 30/9 having weakened on the overall, inventory ratio of electronic parts and devices declined by 13% from the previous month and indicated an improved balance between production / shipments and inventory, such as an expansion in production as well. Despite the Japan Tankan (September survey) that was announced on 1/10 showing a 3-term consecutive worsening in business confidence of large enterprises and the manufacturing industry, it also indicated a strong side that can be seen from the increase in amount from the previous announcement of the software investment plan for financial institutions (fiscal year 2019) as well as mid and small-sized enterprises, etc. It is likely that focus will be on trends involving the supplementary budget for economic measures and disaster countermeasures at the extraordinary Diet session that was called on 4/10.

In Japanese stocks as of late, stocks related to the location-based mobile game, “Dragon Quest Walk”, have proved to be popular. Compared to standard games, the factor of heightened “experiential value”, which require one to actually move their body to reach a destination similar to in “Pokemon GO”, is likely to be crucial. Also, in Tokyo Disneyland, the large scale expansion project, “New Fantasyland”, is scheduled to open in 2020/4, and it appears that efforts by the operating company, Oriental Land (4661), to continuously increase experiential value for its visitors have also influenced their stock price. From the aspect of “experiential value”, the Nintendo Switch game, “Ring Fit

Adventure”, is scheduled to be launched on 18/10, and the game experience of using one’s entire body is likely to lead to an increase in value in addition to the health aspect. We can also find value in the mobile game, “Mario Kart Tour”, which allows one to experience a global metropolis cityscape. In addition, Oculus, a subsidiary of Facebook (FB), has announced the new VR service “Facebook Horizon”, which will offer the novel experience of linking users all over the world through one’s own VR avatar. As the trend of worsening business confidence continues, there may be the aspect of a growing trend in seeking personal “experiential value”. 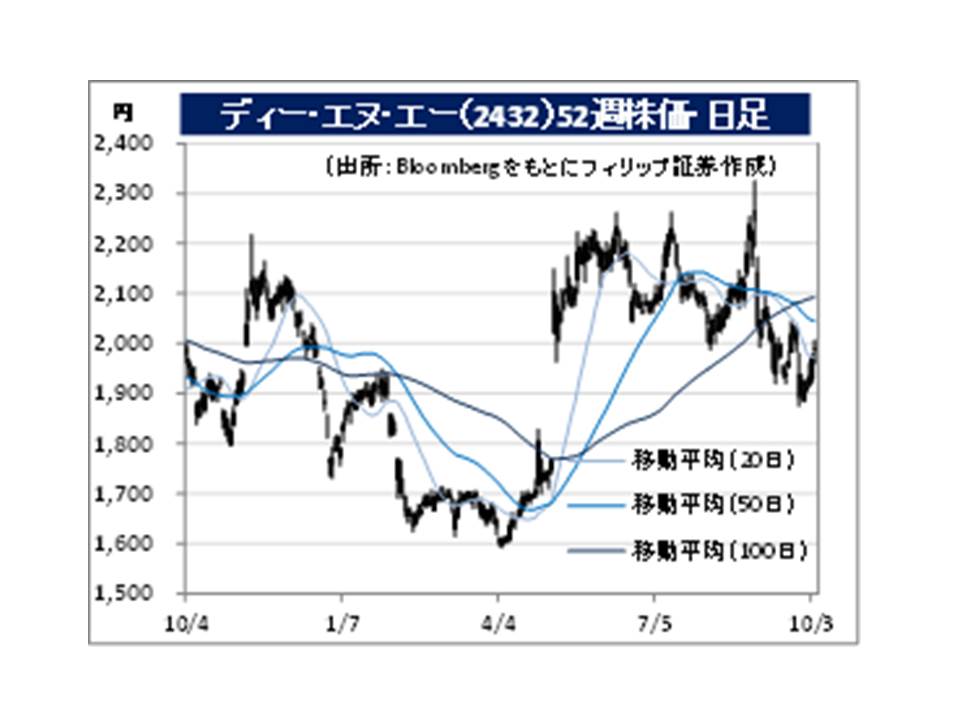 ・Established in March 1999. Offers internet services for mobile and PC. Due to the capital and business tie-up with Nintendo (7974), they carry out the joint-development of mobile games. Also handles the management of professional baseball teams and the automobile / medical-related.

・For 1Q (Apr-Jun) results of FY2020/3 announced on 8/8, sales revenue decreased by 7.5% to 31.383 billion yen compared to the same period the previous year, and operating income decreased by 54.6% to 2.319 billion yen. In terms of segment profits, despite their sporting business being strong with a 10.6% increase, their mainstay games business that decreased by 36.2% and the significant increase in the degree of deficit in their automotive business have affected.

・Company is not disclosing their full year forecast due to difficulties in calculating rational figures. “Mario Kart Tour”, the joint-development project with Nintendo, launched on 25/9 and showed a favourable response that exceeded initial expectations, such as news of it achieving a total of 90 million downloads worldwide in its first week. We can look forward to their sales after the period of offering free Gold Passes (fixed amount monthly subscription). In terms of viewing it a game stock, its PBR (price-to-book-ratio) can be said to be of a low level. 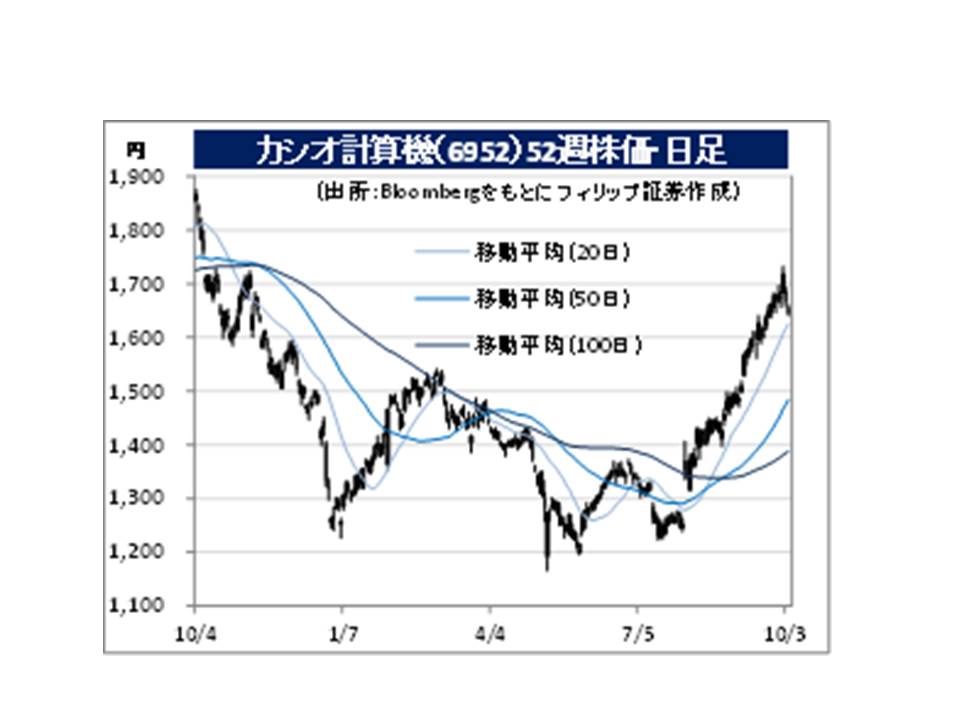 ・For 1Q (Apr-Jun) results of FY2020/3 announced on 1/8, net sales decreased by 1.1% to 66.078 billion yen compared to the same period the previous year, operating income increased by 13.9% to 7.532 billion yen, and net income increased by 1.9% to 4.903 billion yen. A decrease in revenue due to the exchange rate. In addition to G-SHOCK performing strongly, the ratio increase in G metal have led to an improvement in profitability. Also, for musical instruments, their highly profitable ‘Slim & Smart’ has expanded.