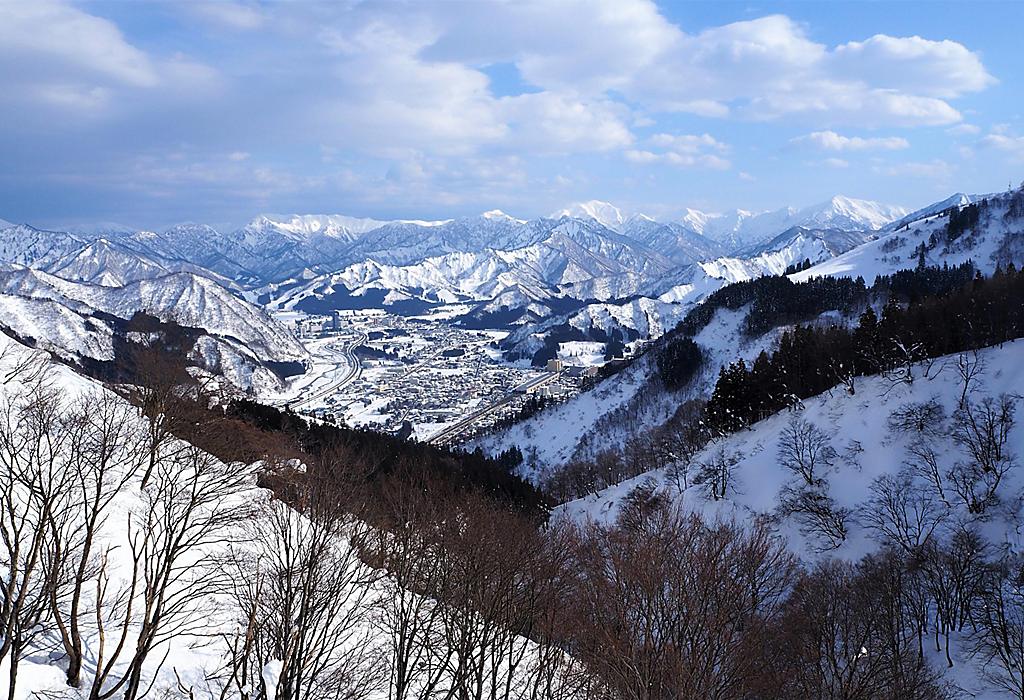 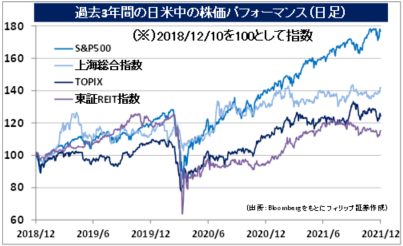 Also, the 28,500-29,000 point range in the Nikkei average is a level where there is an overlap of the leading span of the upper limit of the cloud as well as the base line and conversion line in the weekly Ichimoku, which appears to be a formation of stock market equilibrium points. There is a high possibility that this also serves as a factor that prevents an increase in volatility in the Japanese stock market.

Then, what are factors that would cause the Japanese stock market to move greatly? The point to note here is that Japan is one of the countries with the lowest inflation in the world. Compared to the U.S. Consumer Price Index (CPI) in October increasing greatly last since December 1990 with a 4.6% increase compared to the same month the previous year in core indices less food and energy, which fluctuate greatly, Japan’s CPI in October increased by 0.1% in all indices except for fresh food, which fluctuate greatly. It has finally been in the positive for two consecutive months. In the U.S. employment statistics for November, although nonfarm payrolls stopped at a low level increase of 210,000 compared to the previous month, according to the Job Openings and Labour Turnover Survey (JOLTS) for October, the number of job openings in nonfarm sectors (seasonally adjusted preliminary figures) increased by 431,000 compared to the previous month to 11,033,000. Since the difference between the number of job openings and employment is now at a record high, due to a mismatch from a demand for even better wages and conditions, the increase in nonfarm payrolls in employment statistics becoming a low level has become prominent.

Depending on the content of the U.S. CPI for November that will be announced on 10/12, the U.S. FOMC statement announcement on the 15th and the press conference with Chair Powell after, there is a chance that it may lead to a rise in observations of an increase in interest rates being brought forward and inflation concerns in the U.S. It is likely that stock markets of countries that are relatively undervalued with low inflation will be easily chosen as destinations for assets to escape to. If it comes to “inflation-evading Japan buying”, there will be a high possibility of an appreciation in the Yen and changes from the existing in the flow of what to buy. 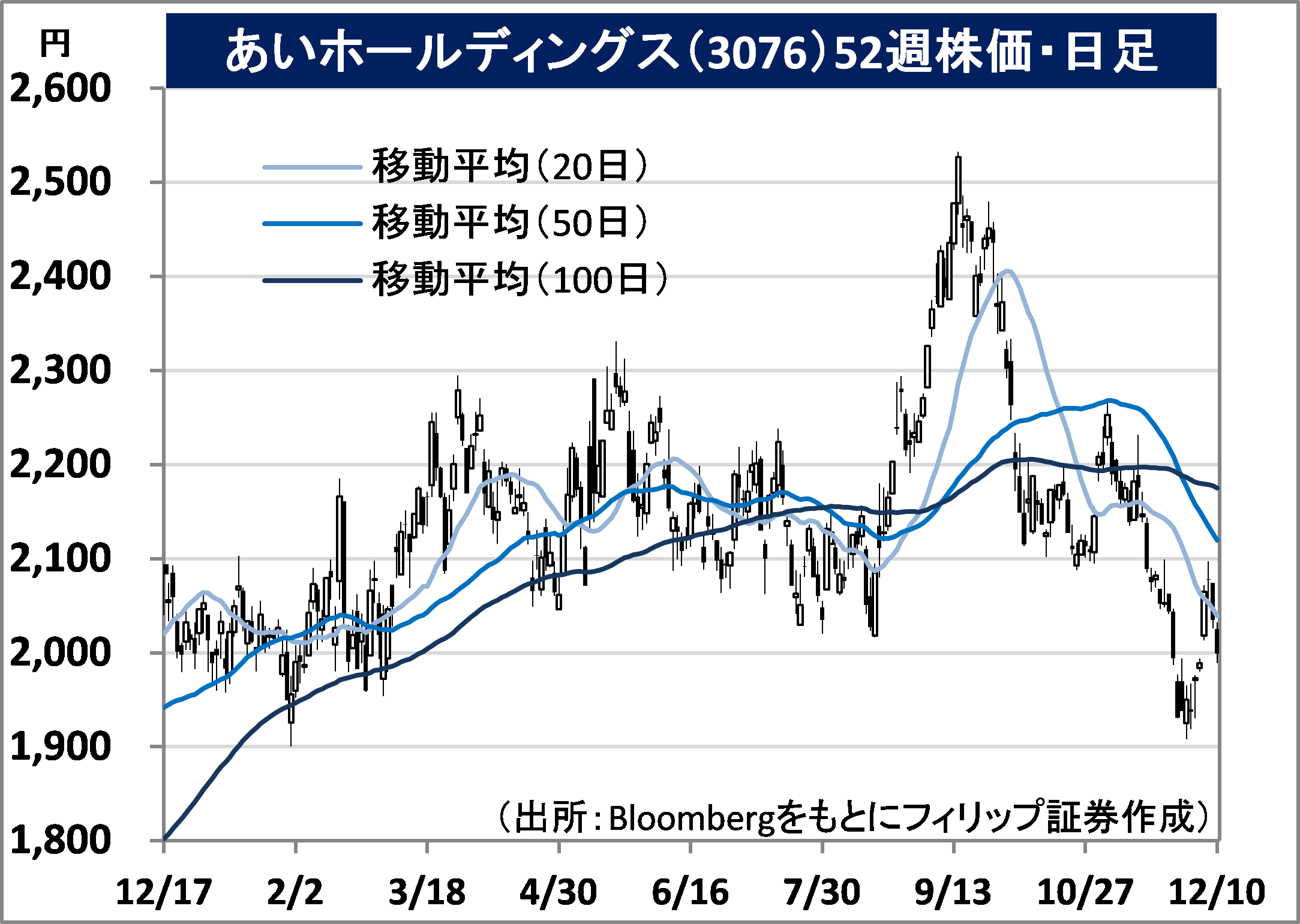 ・Established via a business integration between Dodwell B.M.S. and Graphtec in 2007. Their main businesses are security equipment, card equipment and other administrative equipment, computer peripherals information equipment as well as the architecture business.

・For 1Q (Jul-Sep) results of FY2022/6 announced on 12/11, net sales increased by 4.5% to 11.499 billion yen compared to the same period the previous year and operating income increased by 13.7% to 2.525 billion yen. In addition to a renewal of their own company for apartments and new acquisitions in the security equipment business being favourable, card equipment and other administrative equipment were strong as a result of a recovery in operating activities for hospitals.

・For its full year plan, net sales is expected to increase by 3.0% to 47.6 billion yen compared to the previous year and operating income to increase by 6.9% to 10.1 billion yen. Their mainstay information equipment business, which accounts for 39% of their 1Q’s sales distribution ratio, was affected by the semiconductor shortage and decreased in sales and income in the immediate 1Q. On the other hand, while security cameras in the B2B market account for the company’s mainstay, due to the incident where 17 passengers suffered serious and light injuries on a Keio line train, the Ministry of Land, Infrastructure, Transport and Tourism has strengthened their policy in making it mandatory to install security cameras in new train carriages that will be introduced in the future. 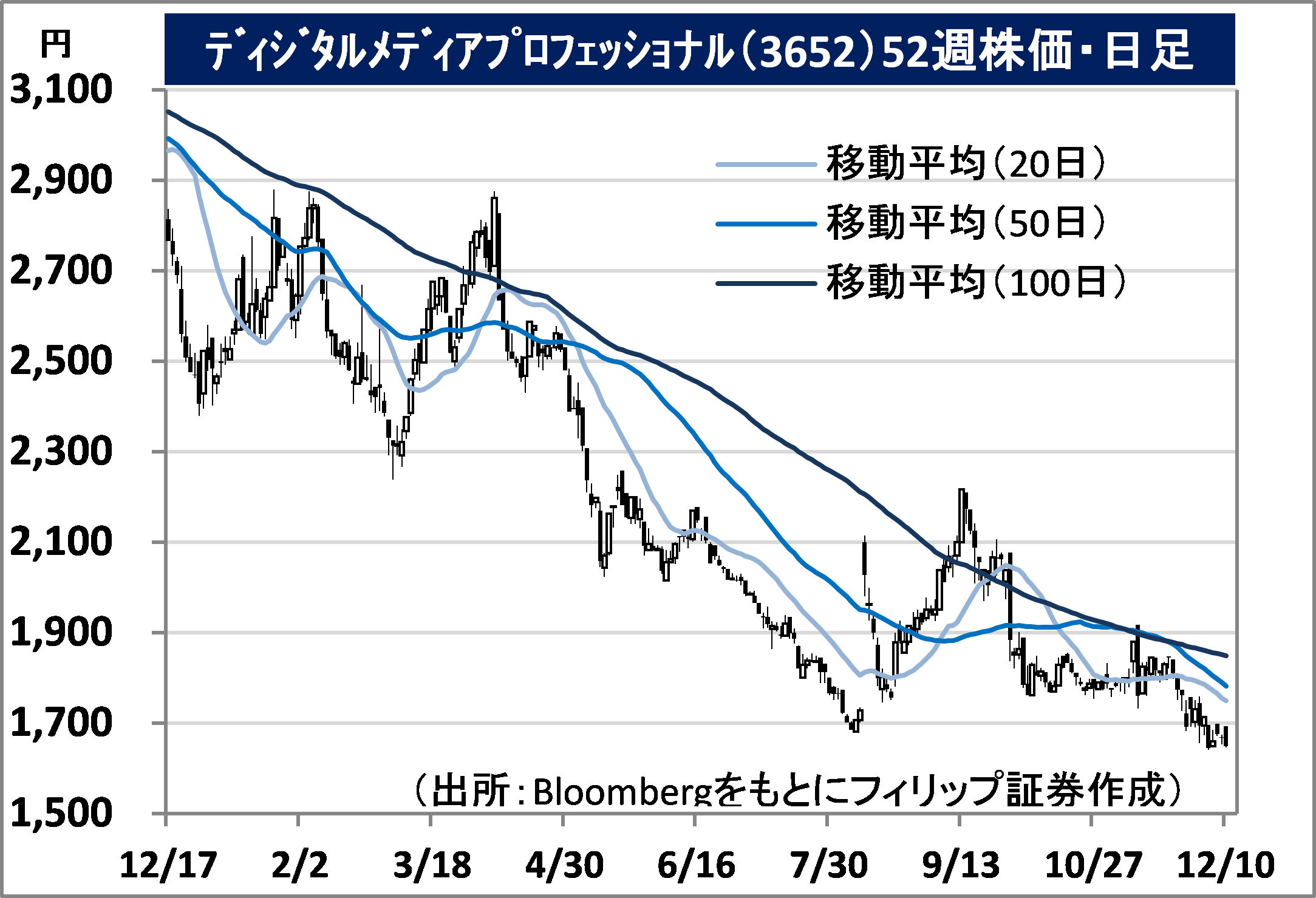 Digital Media Professionals Inc. (3652) 1,649 yen (10/12 closing price)
・Established in 2002. Carries out the manufacture and retail of LSI products in
addition to developing graphics IP cores and providing semiconductor IP cores
that have been incorporated into mobile communication equipment, automobiles
and game equipment, etc. to semiconductor and final product manufacturers.
・For 1H (Apr-Sep) results of FY2022/3 announced on 10/11, net sales increased
by 29.5% to 690 million yen compared to the same period the previous year and
operating income saw a reduction in the degree of deficit from (191) million yen
to (109) million yen. Net sales by field saw growth with safe driving support
increasing by 4.5 times to 450,000 yen, robotics increasing by 74% to 106 million
yen and amusement increasing by 31% to 499 million yen.
・Company revised its full year plan upwards. Net sales is expected to increase by
63.4% to 1.65 billion yen compared to the previous year (original plan 1.5 billion
yen) and operating income to have a reduction in the degree of deficit from (425)
million yen the same period the previous year to (200) million yen (original plan
(250) million yen). In addition to an increase in recurring earnings and new licenses
in the safe driving support and robotics fields, in amusement, they began mass
production and shipping out the next-gen image processing semiconductor,
“RS1”. They are also participating in the U.S. semiconductor NVIDIA’s partner
program.