In the previous week’s issue (Overseas funds turning positive towards Japanese equities), we had stated that BlackRock, the world’s largest asset manager, had upgraded its “value investments” in terms of factor investing by one grade from underperforming to neutral.  Furthermore, on 14/7, US investor Bill Gross opined that, in the short term, instead of growth stocks like Apple (AAPL) and Amazon.com (AMZN), we could expect high dividend yield stocks like IBM (IBM) and tobacco companies like Altria (MO) to outperform.  On 16/7, Netflix (NFLX) stock price fell sharply during afterhours trading despite announcing strong April-June financial results.  On top of that, the constituents of the NYSE FANG+ index, namely Tesla (TSLA), Amazon.com and Microsoft (MSFT) representing US growth stocks all had large shaded candle sticks on 13/7 and continued to fall in the short term till 16/7.  In contrast, the stock prices of IBM and Altria remained firm.  Even for Japanese stocks, we may be reaching a phase in which there is a possibility that funds will shift to stocks with high dividends/high dividend yields, or low PBR stocks, provided that the outlook for performance such as expected dividends and profits can be easily forecast.

Since October 2018, intensifying US-China confrontation, centering on trade friction, continues to be cited as a structural risk factor in equity investment.  After the enactment of the Hong Kong National Security Law at the end of last month, the Hong Kong Sanctions Bill was enacted in the US to allow sanctions on financial institutions including China involved in infringement of Hong Kong’s autonomy.  In particular, citing security risks, the US has strengthened its stance of excluding China’s Huawei.  Reversing its initial acceptance of limited entry, the UK also announced on 14/7 that it would remove the company from the next-generation 5G communication network.  The alternatives to replace Huawei for communication network equipment are Nokia from Finland, Ericsson from Sweden, Samsung Electronics from Korea and NEC (6701) from Japan.  As mentioned in the 29th June, 2020 weekly report, (Is the revival of the Denden Group a signal for Japanese stock revival?), NEC has already shown its readiness to expand globally through a capital and business alliance with NTT (9432).  Through the elimination of Huawei, the risks associated with the US-China confrontation provide opportunities for Japanese companies through telecommunication infrastructure investments   arising from the consolidation of former Denden Group companies. 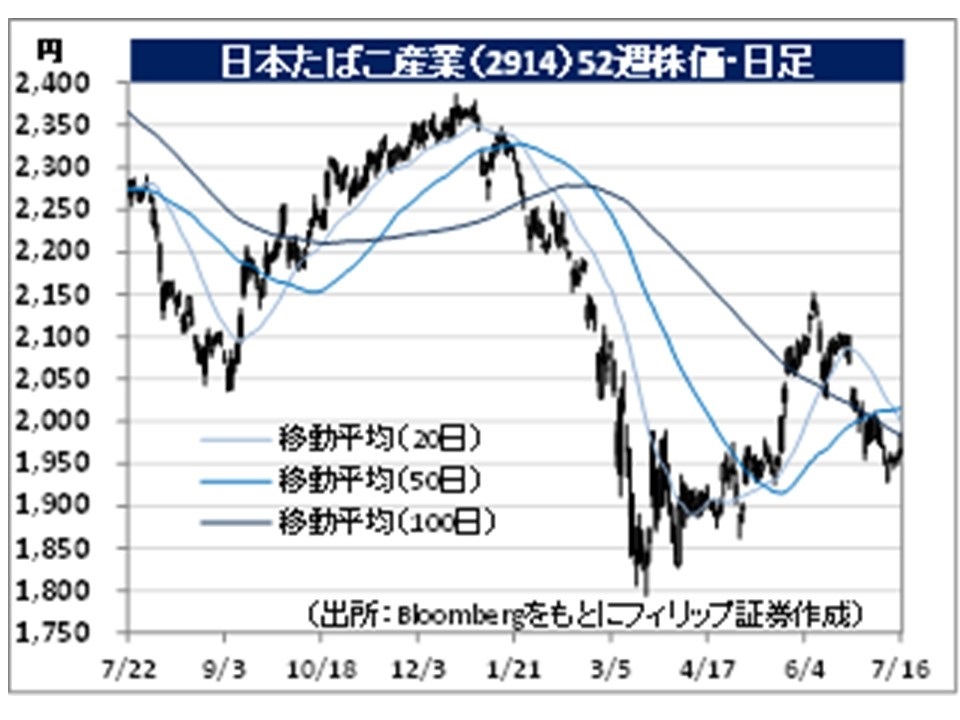 ・Established in 1985.  It was previously known as the Japan Tobacco and Salt Public Corporation.  In addition to the mainstay domestic tobacco and overseas tobacco businesses, also proactively diversifying into pharmaceuticals, processed foods, etc.  Focusing on “Plume TECH”, its original low temperature heating cigarette.

・For 1Q (Jan-Mar) results of FY2020/12 announced on 30/4, sales revenue decreased by 2.8% to 519.62 billion yen compared to the same period the previous year, and operating income decreased by 29.4% to 128.953 billion yen.  However, operating income after constant exchange rate adjustments remained strong, rising 14.0% YoY.  Tobacco segment as a whole, pharmaceuticals and processed foods had performed well, but the price effect of overseas tobacco was particularly pronounced.

・For FY2020/12 plan, sales revenue is expected to increase by 0.2% to 2.18 trillion yen compared to the previous year, operating income to decrease by 6.2% to 471.0 billion yen, and operating income after constant exchange rate adjustments to remain unchanged at 516.0 billion yen.  There is no hindrance to business continuity for tobacco, pharmaceuticals and processed foods businesses, and the impact of Covid-19 is expected to be minimal.  Company will be unique as a value investment with a high dividend yield if its annual dividend forecast of 154.00 yen per share (expected dividend payout ratio of 89.6%) is maintained.

・For FY2020/3 results announced on 14/5, net sales increased by 1.2% to 18.528 billion yen compared to the previous year, and operating income increased by 58.6% to 1.854 billion yen.  Strong demand for pharmaceutical and agrochemical intermediates in the fine products segment had contributed to increased sales.  In terms of profits, correction of selling prices, reduction of raw material costs, and reduction of other operating costs were successful, resulting in higher profits.

・For FY2021/3 plan, net sales is expected to increase by 5.2% to 19.5 billion yen compared to the previous year, and operating income to decrease by 19.1% to 1.5 billion.  Company is engaged in the production of raw materials that form the skeleton of the Covid-19 therapeutic drug, Remdesivir, of Gilead Sciences, and good clinical trial results of the drug were published on 10/7.  In addition, expectation for TOB will increase due to the dissolving of parent and child listings and the consideration of the parent company that does not want profits to flow out of the corporate group in an uncertain environment.