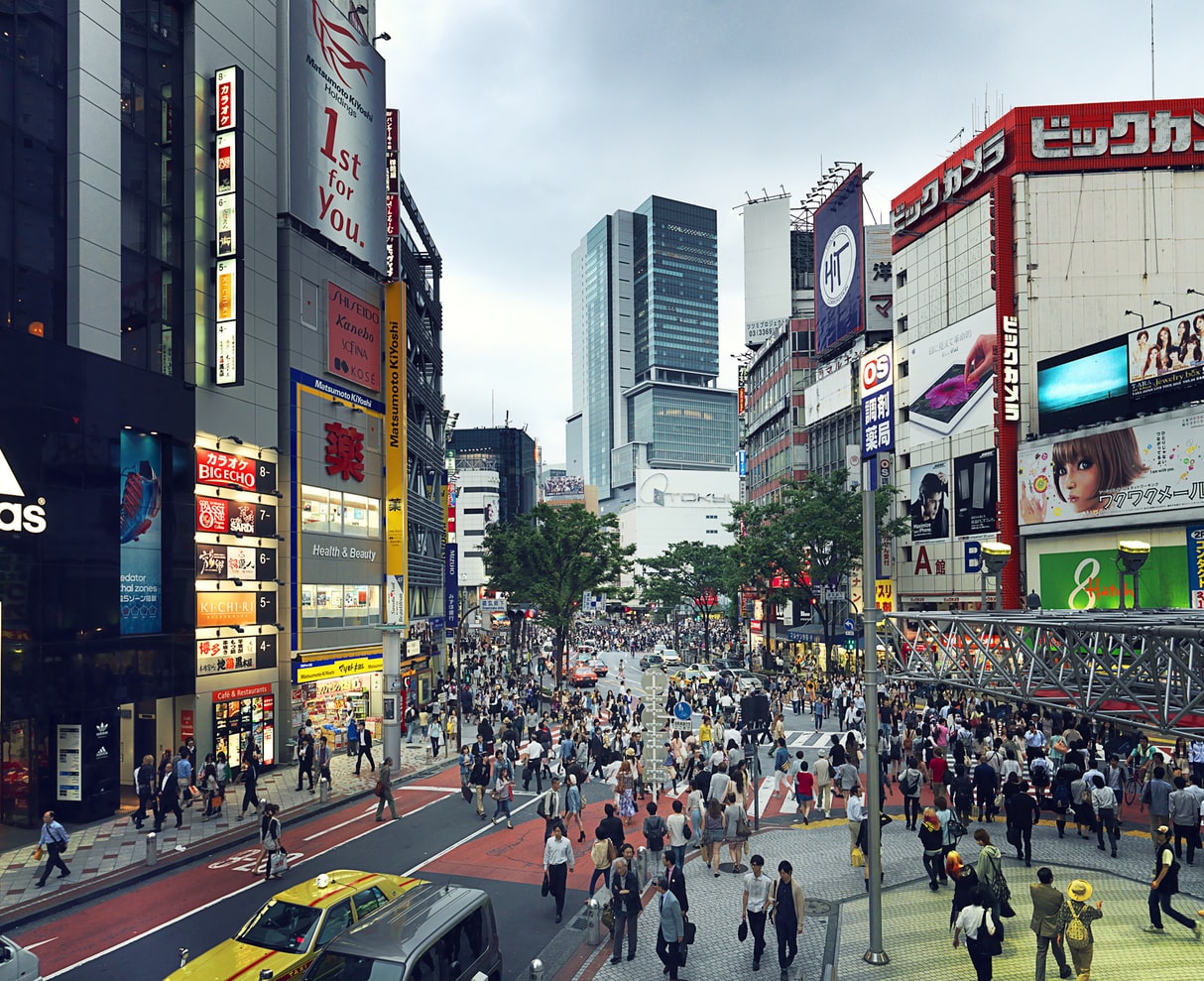 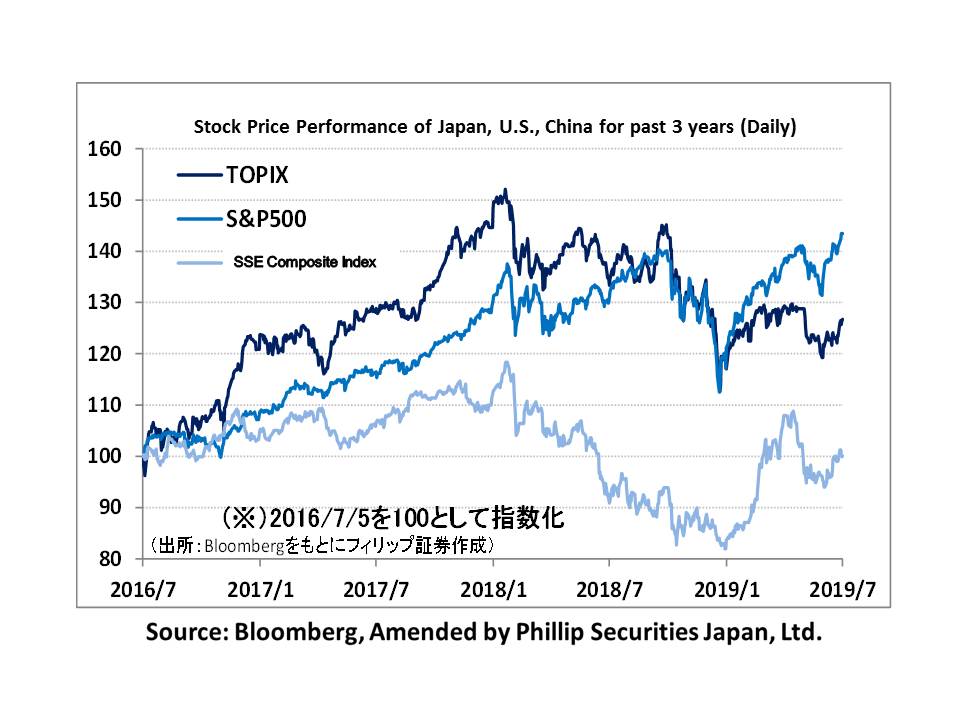 In the Japanese stock market from 1/7 onwards, the US-China summit talks on 29/6 saw a decision to call off the invocation of the 4th round of tariffs, along with the agreement to approve the supply of components to Huawei proved to be favourable as the Nikkei average began to exceed 21,500 points, which saw a move towards a high price. Although the rise in price was hindered when it was found out that the supply to Huawei was only limited to generic goods that pose no threat to national security, the NY Dow also appeared strong by renewing their highest ever record high.

From a mid and long-term perspective, we want to keep our eyes on the following 2 points. First is the US-North Korea summit talks, which immediately took place after President Trump’s call via twitter. He mentioned “the need for the international community to stand together to show a firm stance towards the denuclearisation of North Korea”, and for that purpose, “close cooperation between Japan, the US and North Korea is essential”, however, between the US and Japan, President Trump expressed discontent stating that the Japan-US security treaty was “a one-sided and an unfair agreement”. Between Japan and North Korea, from 4/7, a reinforcement of regulations was implemented for stricter procedures to approve the export of 3 products, which include semiconductors from Japan to North Korea. The US-North Korea summit talks taking place this time round also clearly show that the balance of international relations surrounding Japan, which centre on and has been comprised of the North Korea issue, has fundamentally changed. This means that there will also be a reason to consider the possibility of the US increasing their demands for a revision of Japan-US security, and in such case, the significant increase in burden of defence expenses may also result in concerns of an issue of Japan’s public finances in the red coming to the fore.

Next, on 24/5, the Ministry of Finance announced that Japan’s net foreign assets at the end of 2018 reached 341.55 trillion yen from 12.25 trillion yen compared to the previous year, which saw the 2nd largest ever scale of net assets. Although at a glance, this may seem that it is due to yen appreciation,  however, looking at the breakdown, we can see that the difference in the amount between assets and liabilities due to the investment of overseas securities have decreased, and the difference in the amount between assets and liabilities due to foreign direct investment is expanding. For foreign securities investment, although “buying yen to avoid risk” due to yen conversion after selling can easily occur, in the case of direct investment of foreign corporate acquisition, etc., it is not as easy to be able to sell them off as in securities investment. We can consider the above 2 points as aspects that will serve as factors towards yen depreciation in foreign exchange rates, which will greatly influence the Japanese stock market.

In terms of investment strategy, in contrast with the objective to increase ROE (Return on Equity) and ROIC (Return on Invested Capital), from the viewpoint of group business selection and focus, we want to continue to keep a close watch on mid and long-term movements that attempt to resolve the distortion of capital relationship due to “parent-subsidiary listing”. 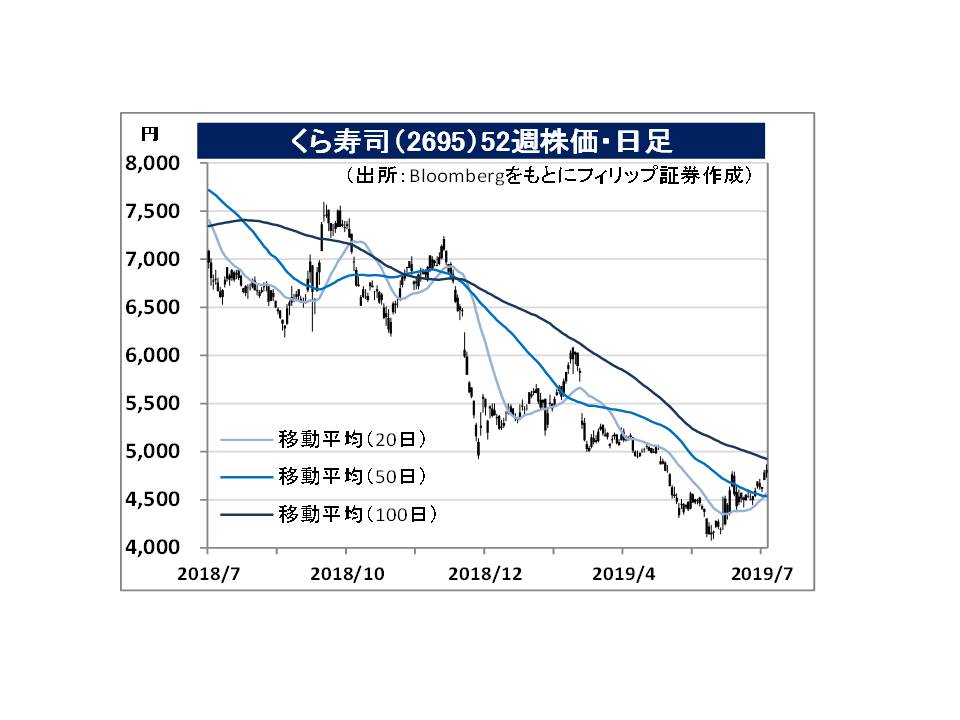 ・Founded in 1977, and company established in 1995 as Kura Corporation. Changed its company name in 5/2019. Expands a conveyor belt sushi chain under the brand of “Additive-free Kura Sushi”, etc. Under the corporate philosophy of “returning to food before the wars”, company develops and offers products which eliminate the use of “four major food additives” (chemical seasoning, artificial sweeteners, artificial colourings, and artificial preservatives).

・For company’s full year plan, net sales is expected to increase by 4.0% to 137.813 billion yen compared to the previous year, operating income to increase by 3.8% to 7.133 billion yen, and net sales to increase by 1.2% to 5.19 billion yen. On 7/4, the company’s subsidiary, Kura Sushi USA, announced that they had submitted a registration statement for the US IPO to the US Securities and Exchange Commission. Company aims to be listed on NASDAQ. 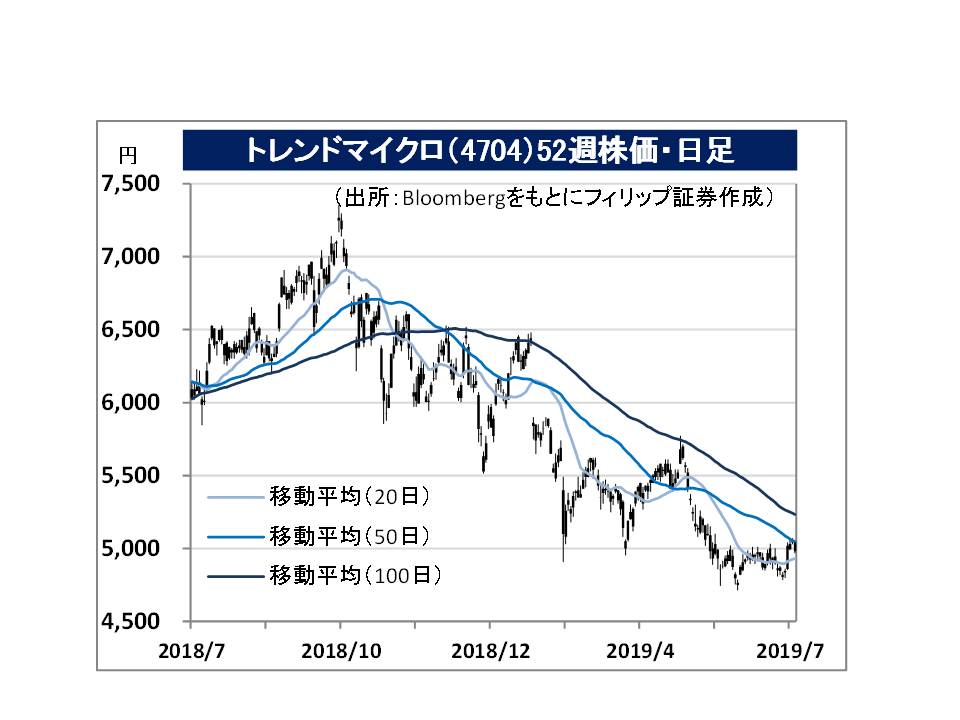 ・Established in 1989 as a subsidiary of a UK corporation, and changed its company name to the current name in 1997. Develops and retails “Virus Buster”, along with other computer security countermeasures products, and expands them to Japan, North America, Europe, Asia Pacific, and Latin America.

・For 1Q (Jan-Mar) results of FY2019/12 announced on 9/5, net sales increased by 3.9% to 39.472 billion yen compared to the same period the previous year, operating income remained unchanged at 9.308 billion yen, and net income increased by 4.8% to 6.899 billion yen. Although there has been a decrease in revenue for North America, there has been an increase in revenue for the areas aimed at corporations, which are Japan, Europe, Asia Pacific, and Latin America, which absorbed the increase in upfront investment cost such as labour costs, etc.

・For FY2019/12 plan, net sales is expected to increase by 5.1% to 168.6 billion yen compared to the previous year, and operating income to increase by 6.0% to 38 billion yen. As a security solution for the 5G era, on 26/3, the “docomo cloud-based network security service” which safeguards IoT devices, began offering its services in collaboration with NTT Docomo (9437), which will benefit from the popularisation of 5G in the future. The monthly chargeable subscription-type business is also an area to keep an eye on.