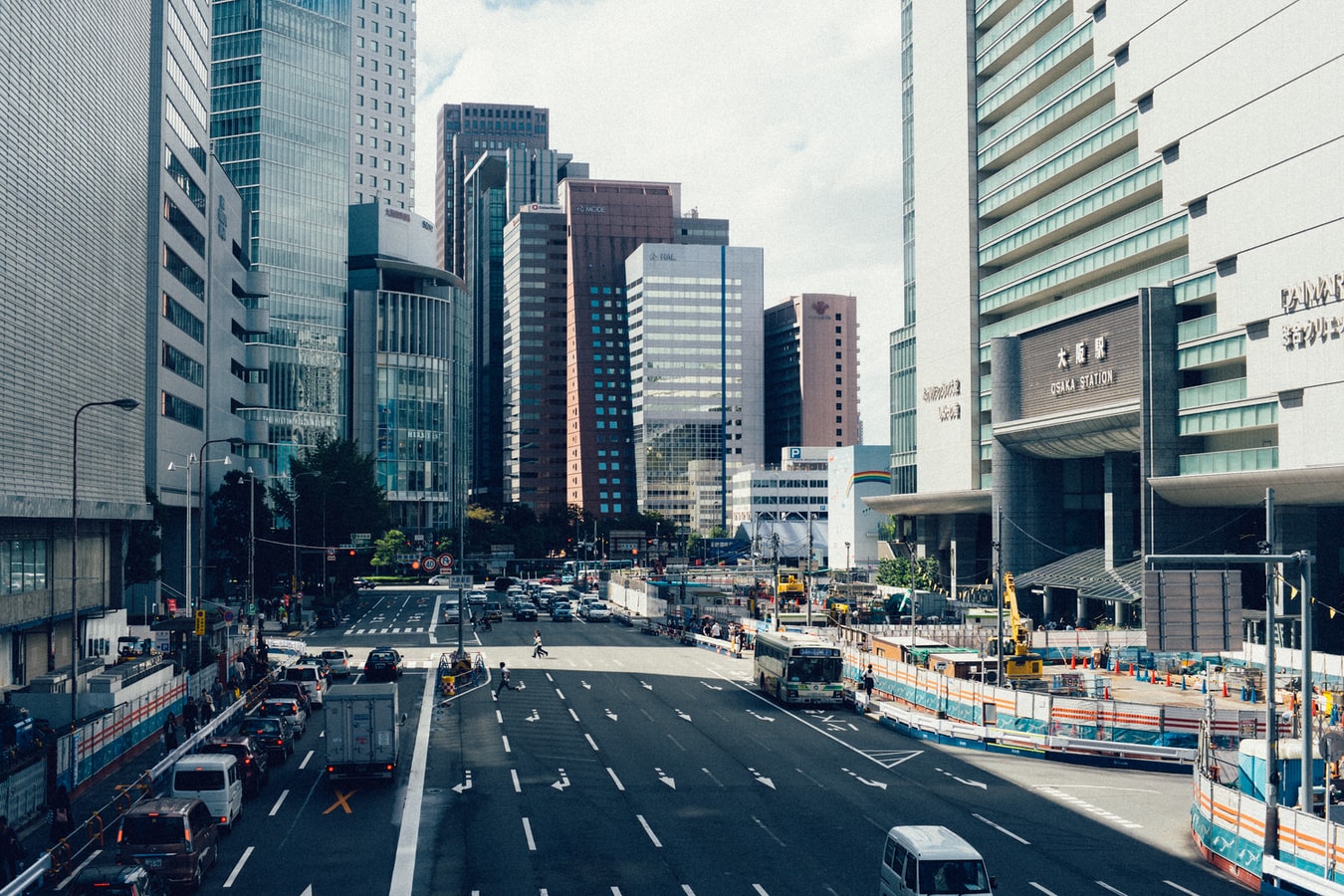 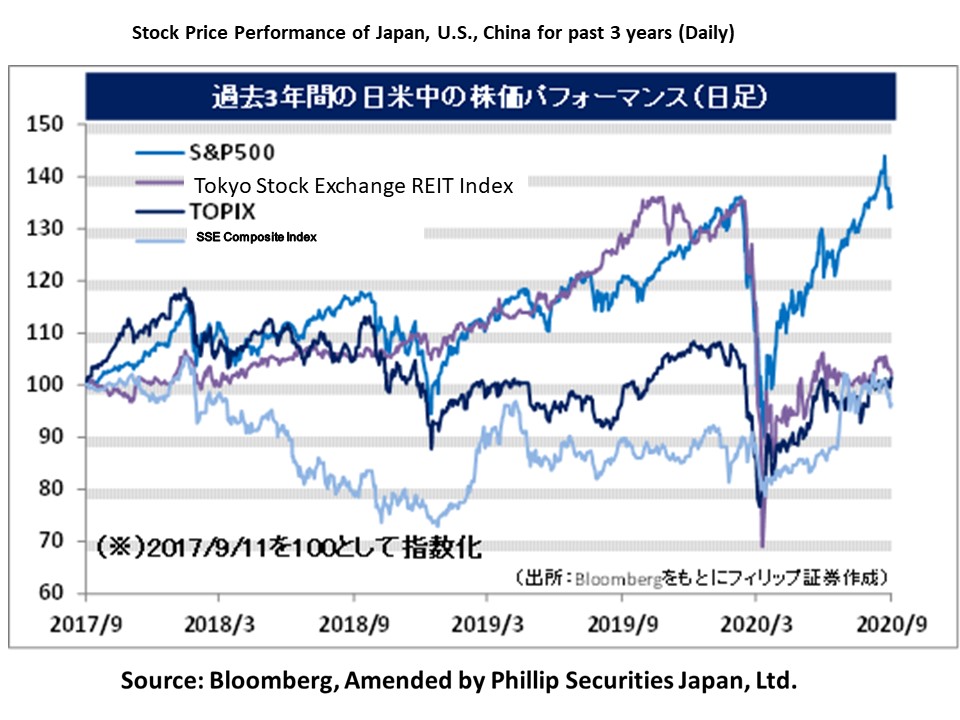 In the 31st August 2020 issue of our weekly report (Focus on the COVID-19 Catastrophe Shifting to Nursing Care and the Start of the Political Market), 11/9 was an SQ day involving futures and options transactions of the Nikkei average, and we mentioned the need to be careful of the increase in stock price volatility in the 2 weeks leading up to it. Even with the large fall in the U.S. stock market from 3/9 mainly in high-tech and IT stocks, the Japanese stock market performed strongly for the most part within a narrow range. Compared to the Nikkei average’s closing price on 28/8 at 22,882 points, the SQ value calculated based on the opening quotation of 225 stocks comprising the index was 23,272 points. We can consider the following 2 points as the main factors for the strong market turnout in Japanese stocks which differed from U.S. stocks.

The first is that the political market had begun. For the Liberal Democratic Party presidency election, the joint plenary meeting for the party members from both houses of the Diet is to be held on 14/9 with voting and counting to take place, and on 16/9, the next prime minister is scheduled to be nominated via a convocation for an extraordinary Diet session. Chief Cabinet Secretary Suga, who is a strong candidate for the next prime minister and is running for the Liberal Democratic Party’s presidency election, demonstrated a careful stance in the dissolution of the House of Representatives and the general election after repeatedly expressing his thoughts on “the ought to prioritise COVID-19 countermeasures over all” in a commercial broadcast program on 8/9, however, since Kono, the Minister of Defence who participated online in the U.S. think tank event remarked that “an early snap election will likely be held sometime in October”, perhaps market participants have begun to be aware of the dissolution of the House of Representatives and the general election. Including the time in autumn 3 years ago, the dissolution and general election is often regarded as a strong source of material for the purchase of Japanese stocks, and is regarded as one of the factors for Japanese stock purchasing.

The next factor is the trend of “value stock” investing coming into full force, which is represented by Warren Buffett’s purchases of general trading company stocks. Regarding investments in low P/B (price-to-book ratio) or value stocks with high dividend yield, in our 25th May 2020 issue of our weekly report, “Breaking Away From “PBR Shakeup” and Low PBR Stocks”, with the uncertainty involving the impact of the COVID-19 catastrophe, attention was already on low P/B ratio stocks, where the P/B ratio is regarded to have higher certainty as a measure of investment over the forecasted P/E ratio (price-earnings ratio), however, due to the fall in prices of “growth stocks” that are expected to grow which are represented by U.S. high-tech and IT stocks, it appears that there might have been an increase in the pace of the shift from growth to value. Also, regarding the overly low market capitalisation of large corporations which involve national policy, from the viewpoint of the risk of them being acquired by overseas corporations, it seems that the Japanese government will not be able to overlook them.

For the Japanese stock market for the time being, there is a need to be wary of risks of a fall in U.S. stock prices due to the election of Joe Biden as the U.S. president, who mentions a tax hike, as well as the growing possibility of a full-scale stop in semiconductor export from corporations utilising U.S. technology to China’s Huawei. 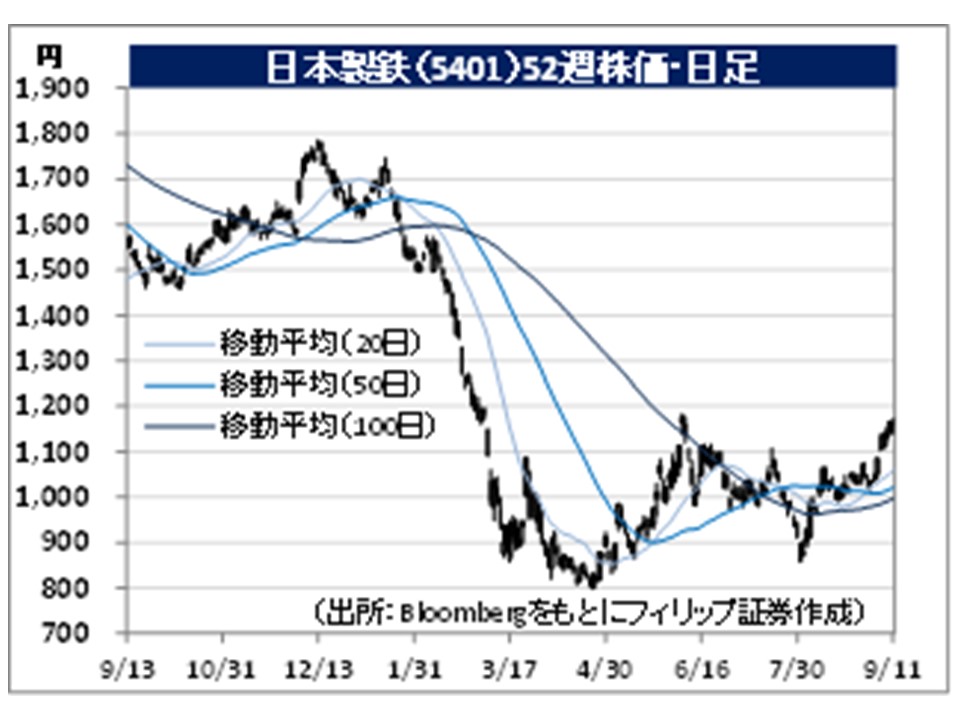 ・For its FY2021/3 plan, for business profit which indicate results of sustainable business activities, compared to (150) billion yen in the first half (Apr-Sep), the latter half (2020/10-2021/3) is predicted to return to profit at 30 billion yen due to the increase in crude steel production. Due to the prioritisation of the production facility structure countermeasure which was decided on 7/2 this year, the company predicts that they will pass dividends. Expectations are on the earlier than expected achievement of the targeted company profit growth of 100 billion due to the decrease in the scale of crude steel production capability of 5 million tonnes per year and a 4 cardinal number decrease in the blast furnace cardinal numbers. 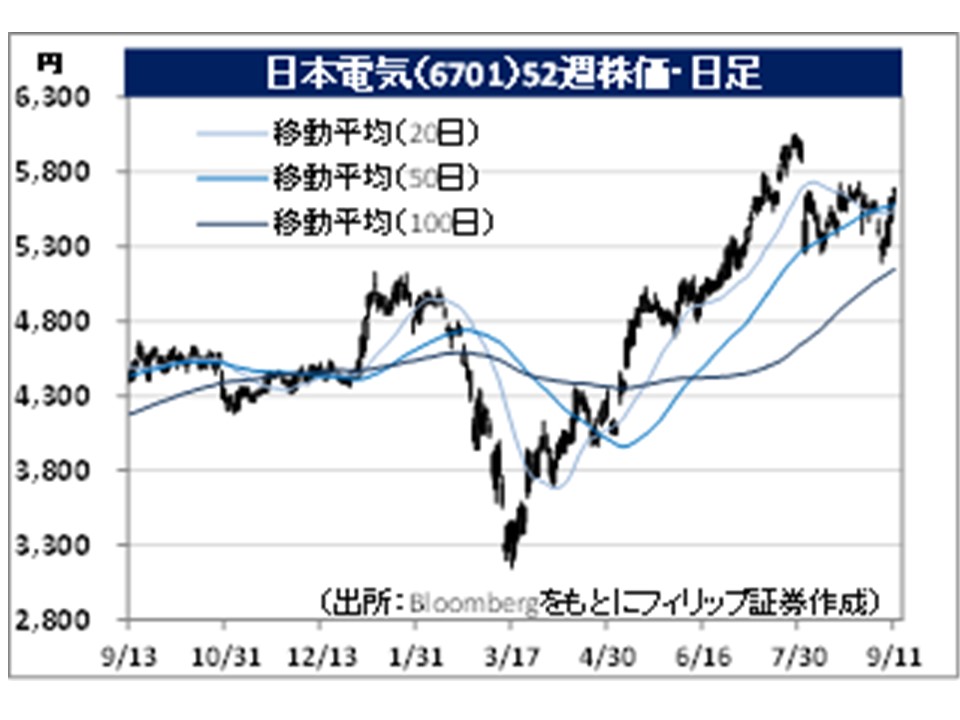 ・For 1Q (Apr-Jun) results of FY2021/3 announced on 31/7, sales revenue decreased by 10.1% to 587.729 billion yen compared to the same period the previous year, and operating income fell into the red from 3.382 billion yen the same period the previous year to (10.274) billion yen. Despite the improvement in selling, general and administrative expenses at a 3.3% decrease, the decrease in large-scale projects and the demand in updating business PCs completing a cycle have affected, which led to a revenue decrease and operating deficit.

・For its full year plan, sales revenue is expected to decrease by 2.1% to 3.3 trillion yen compared to the previous year and operating income to increase by 17.5% to 150 billion yen. Company is strengthening efforts in the 5G area, such as the joint development of 5G core networks with Rakuten Mobile which was announced on 3/6, as well as the capital business partnership with NTT (9432) involving the joint development on 5G technology which was announced on 25/6, etc. Ahead of the implementation of rules on the Chinese communications giant, Huawei, by the U.S. on 15/9, the company’s shares in overseas 5G communication base stations are predicted to increase.