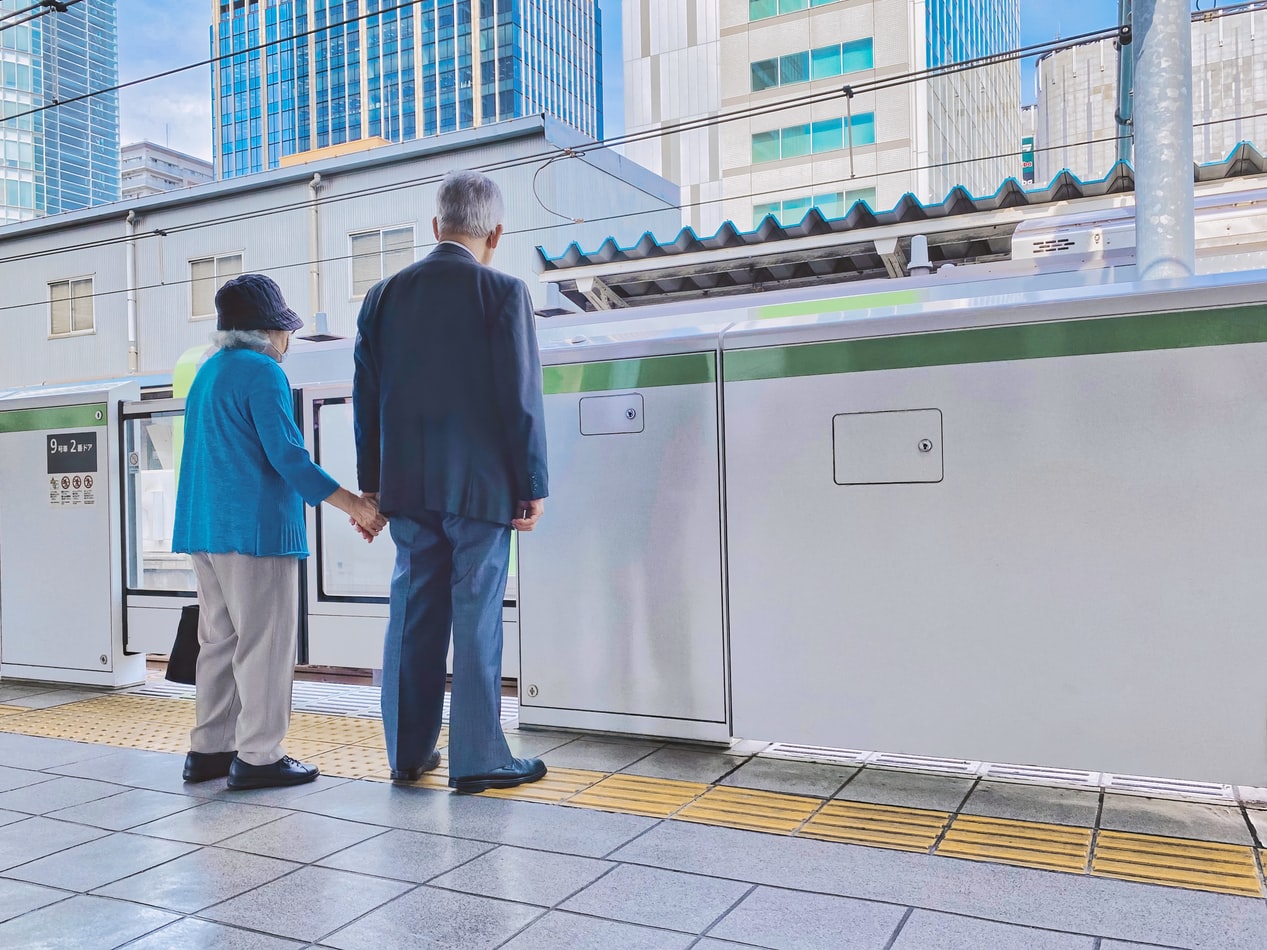 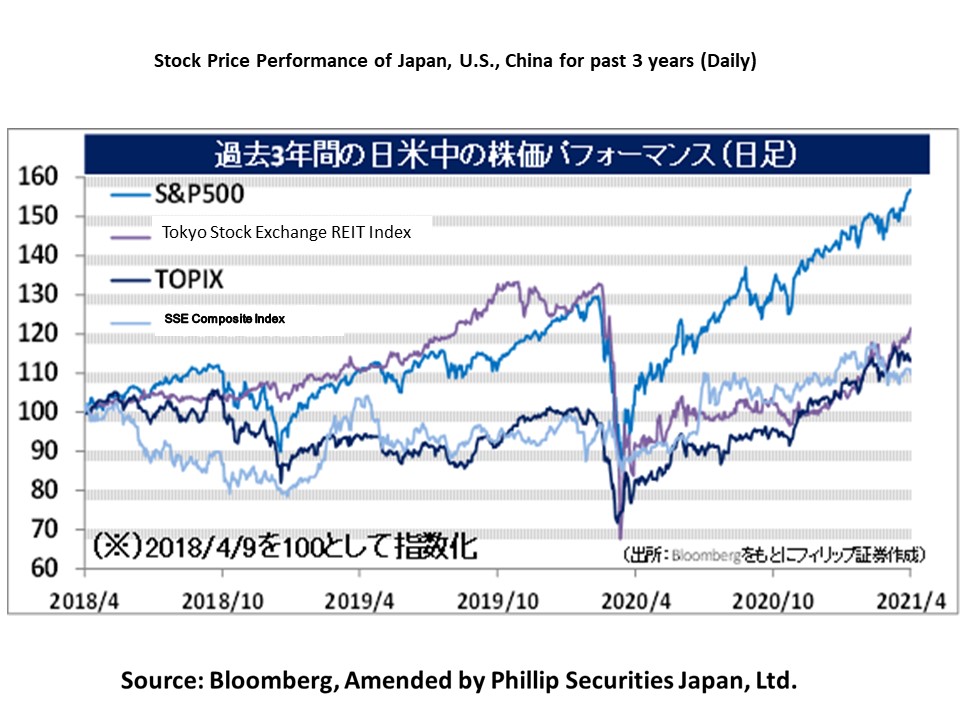 In response to the announcement by U.S. President Biden on 31/3 of the “U.S. Employment Plan”, an infrastructure investment plan of a scale of 2.25 trillion dollars, in contrast to major stock price indices in the U.S. stock market renewing their record highs across the broad at the start of the week on 5/4 just after the Easter holidays, the Nikkei average hit a plateau within a high price range. Due to the increasing trend in the Nikkei average which started from the low of 22,977 points on 30/10 and has lasted over about 5 months till now, the range around 23,000 points has been regarded as a turning point in the stock market. Taking 23,000 points as the middle level of the stock market range and presuming a range with a lower limit that is the low of 16,358 points on 19/3 last year, if we assume that the middle level is the middle of the price range from the upper limit to lower limit of the stock market range, we can estimate that the upper limit of the stock market range will be 29,642 points. Perhaps the price level around this will be regarded as a turning point in future stock market developments as well.

The Nikkei average’s closing price on 8/4 is of a 1.32 times weighted average P/B ratio (price-to-book ratio) with weight attached on the market capitalisation of index components, etc., and is a level that is close to 1.39 times in Jan 2018, which has been the greatest in the past 5 years, despite having decreased from 1.36 times on 18/3. We ought to be careful about the aspect of tending to regard it as overvalued. The weighted average BPS (net asset per share) of the Nikkei average which hit about 22,500 points on 8/4 is thought to be increasing due to the addition of each corporation’s net income to the BPS after going through every quarterly financial results announcement. Even if the weighted average BPS at the end of this year were to increase to 25,000 points, based on calculation, it will finally hit 34,750 points at the P/B ratio of 1.39 times. It would be likely impossible to justify from a fundamentals perspective to expect it to jump to 35,000 points or 39,000 points, which exceeds the record high price, without experiencing an increase in net income.

Even amongst the world, Japan stands out for its “aging population” and “natural disasters”. Perhaps there is also a

demand in international society for Japan as a developed country that faces challenges to give back to the rest of the world their results of experience and research and development in these 2 areas. Regarding an “aging population”, in terms of the “aging ratio”, which refers to the ratio comprised by those 65 years and above in the population, in 2020, Japan was top in the world at 28.7%, significantly exceeding the overall world’s 9.3%. With there being progress in aging worldwide, perhaps the acceleration in overseas expansion of “HAL”, a body-wearing robot for healthcare and nursing care handled by CYBERDYNE (7779), would be desirable internationally as well. Also, according to the “World Risk Report” released by the United Nations University in Aug 2016, as a result of analysing 28 items of indices on 5 types of national disasters, which are earthquakes, typhoons, floods, droughts and the rise in sea level, it was said that Japan was 4th in the world to be subjected to risks of natural disasters. There is also focus on the movements of GIKEN (6289), which is accelerating overseas expansion based on expertise cultivated from the National Resilience countermeasure. 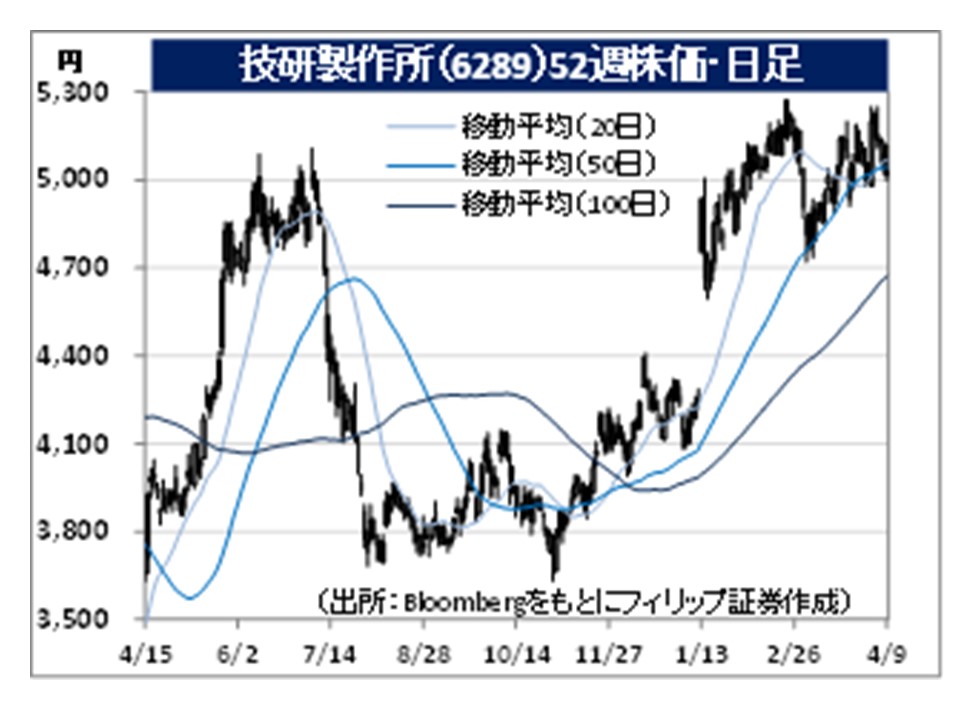 ・For its full year plan, net sales is expected to decrease by 10.6% to 27.1 billion yen compared to the previous year and operating income to increase by 26.1% to 3.15 billion yen. With “changing construction in the world with innovative construction methods (implant construction method)” as their management policy, in addition to current preparations on projects in Amsterdam City in the Netherlands and a tailings dam in Brazil, the company has set up a representative office in Bangkok, Thailand on 15/3. There is anticipation on the adoption of the company’s construction method in large-scale river renovation for the purpose of flood prevention measures in Thailand, where there are frequent flood damages 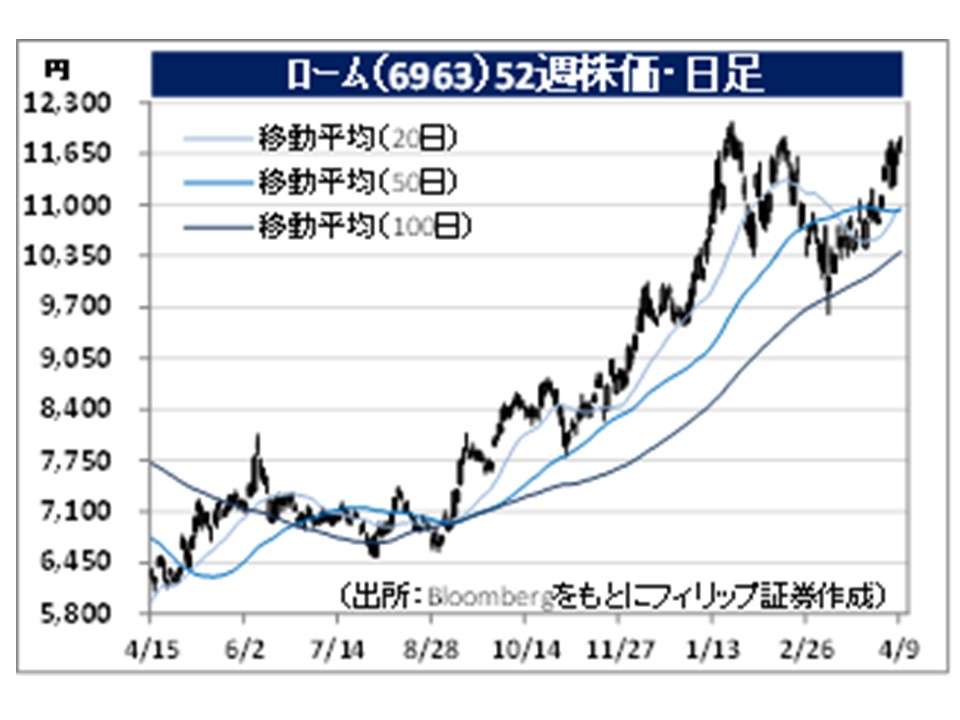 ・Founded in Kyoto in 1954 for the development and retail of fixed carbon film resistors. Expands business segments, such as large-scale integrated circuits (LSI), semiconductor elements, modules and others (resistors, etc.). Company is top in Japan for custom LSIs.

・Company revised its full year plan upwards. As a result of trends of a sharp recovery for markets related to automobile in electronics, net sales is expected to decrease by 0.8% to 360 billion yen (original plan 340 billion yen) compared to the previous year and operating income to increase by 8.5% to 32 billion yen (original plan 23 billion yen). The company is aiming for a global share of 30% by 2025 in the SiC (silicon carbide) power devices market, which is predicted for a proper expansion in the in-vehicle inverter area following a popularisation of electric cars (EV).