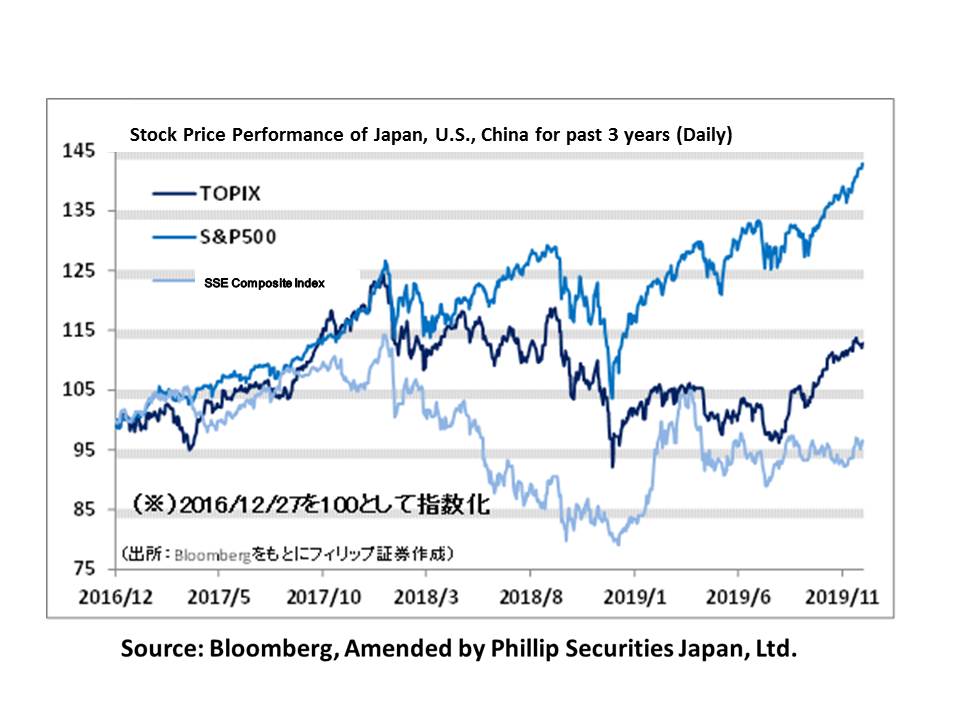 We are at the last trading day of 2019. For the Japanese stock market, the Nikkei Average had fluctuated at a rate of around 20% since the beginning of the year. Indeed, looking back at the past 12 months, we can remember it as a year with good transitions. However, the process along the way was far from smooth. Firstly, concerns over risks regarding the US-China trade war have led to strong selling from the start of the year.  In credit transactions, short sales exceeded margin buying, resulting in the appearance of “long shares” with margin debt balance ratio below 1.0. However, we could also see market support when there were movements to buy back before the March closing date and the long holidays commemorating the change of era. The selling pressure affected the Nikkei Average as a result. In arbitrage trading involving spot and futures trades of the index, the “unsettled sales balance” vastly exceeded the “unsettled buying balance” after 2019/6. In early September, we even saw the unsettled buying balance becoming less than 20% of the unsettled sales balance.

Under such selling pressures, the Nikkei Average plummeted to its lowest value for year 2019 to 20,110 points on 6/8.  At that time, the weighted average PBR (Price to Book Ratio) of the 225 stocks adopted by the Nikkei Average was 1.01 times, and did not fall below the BPS (Book Value per Share) which is the liquidation value of a company. That provided an opportunity to review the overselling which reached a level where there were no justifiable reasons in terms of fundamentals. Indeed, it afforded an opportunity to highlight the relative cheapness of Japanese equities compared to their asset values. Since autumn, repurchase of spots owing to elimination of unsettled sales balance of arbitrage trading related to the Nikkei Average has been the driving force for the rise in market prices. On 2019/12, for the first time in about six months, the Nikkei Average rose to around 24,000 points when the unsettled buying balance exceeded the unsettled sales balance.

What then are the main issues confronting the Japanese economy and Japanese companies from 2020 onwards.  Firstly, as seen in the integration of LINE (3938) and ZHDS (4689), there will be increasing expectations in the stock market to see companies aiming for “super APPs” that can compete with huge platformers not only in the Japanese market, but also in the world.  Next are expectations placed on “Local 5G”, for which the Ministry of Internal Affairs and Communications has started accepting license applications on 24/12. Manufacturing productivity will be greatly improved if every device is automated and connected to the internet at factories belonging to manufacturers, and data are collected in real time in a 5G communication environment. Let’s pay attention to this as-yet unmasked sector having great potential to revive the Japanese economy. 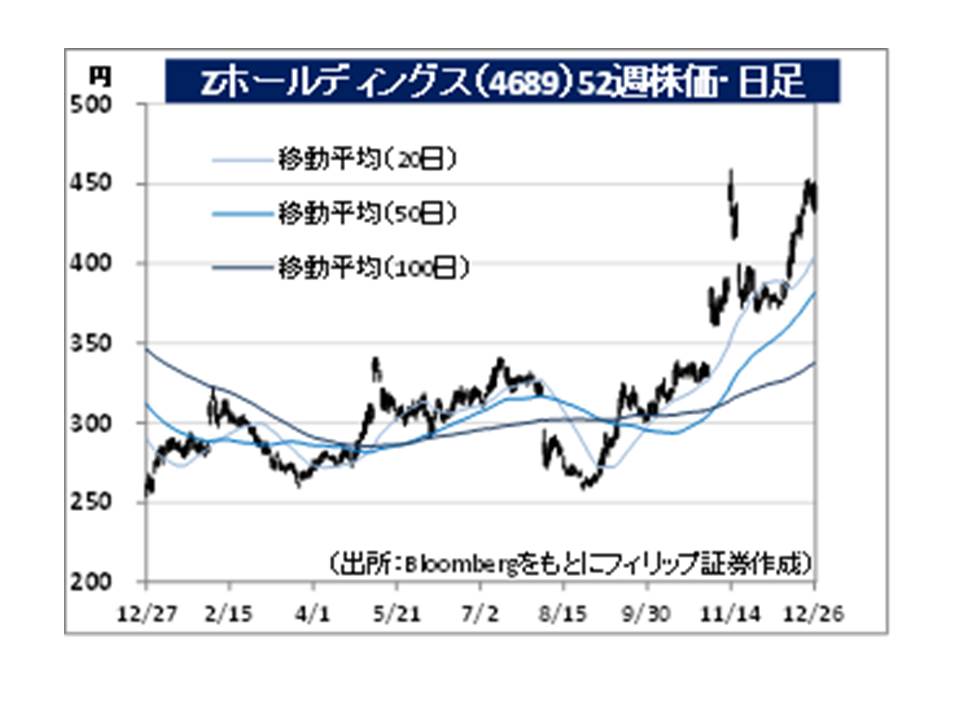 ・Established in 1996 as a subsidiary of the current Softbank G (9984). Involved with Ecommerce and media businesses.  Had a change in company name from Yahoo Japan on 2019/10. Finalized an agreement for business integration with LINE (3938) on 2019/12.

・For 1H (Apr-Sept) results of FY2020/3 announced on 1/11, revenue increased by 4.1% to 484.145 billion yen compared to the same period the previous year, and operating income decreased by 9.0% to 75.661 billion yen.  Advertising revenue and increase in consolidated subsidiary sales had contributed to increase in revenue. Operating income declined due to an increase in depreciation and SG&A expenses, as well as a gain on sales of IDC Frontier Inc. recorded in the same period of the previous year as a one-time factor.

・For its full year plan, revenue is expected to increase by between 4.7-6.8% amounting to 1.00-1.02 trillion yen compared to the previous year, and operating income to increase by between 0.1-6.7% amounting to 140.6-150.0 billion yen. Finalized an agreement for business integration with LINE on 23/12.  Positioning LINE, which is also popular in Thailand and Taiwan, as a “platform-based APP (super APP) that will be the starting point for various businesses and lifestyles. Let’s pay attention to its strategy of using PayPay, its payment application, as a main pillar to compete with major overseas platform companies. 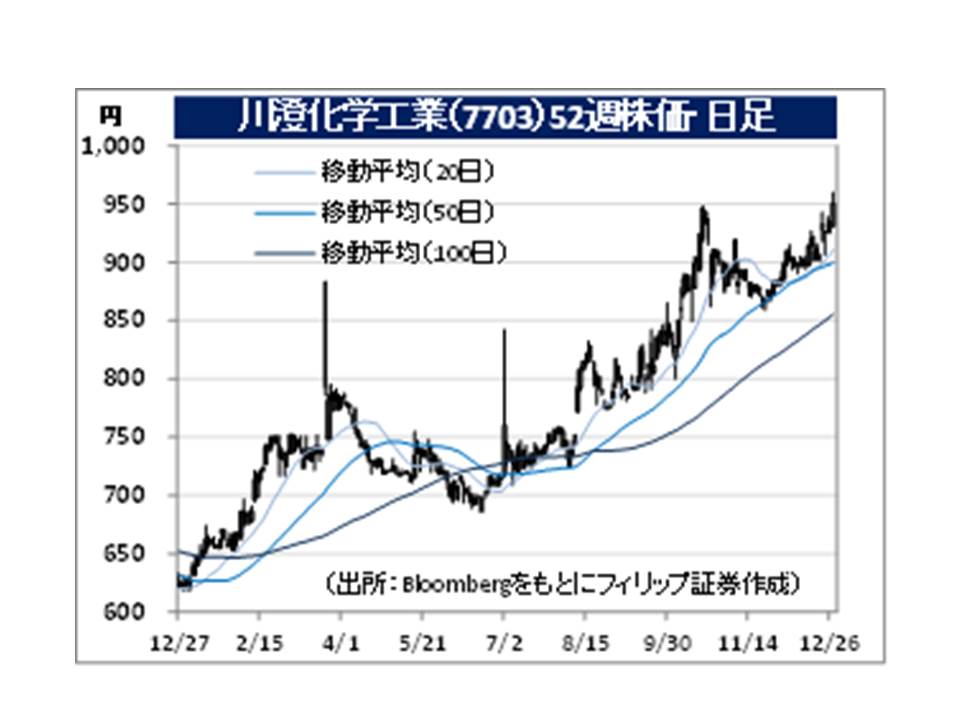 ・Established in 1954. Main businesses include the manufacture and sale of blood and intravascular products such as blood bags and blood sampling kits, as well as medical equipment and pharmaceuticals related to extracorporeal circulation such as dialyzers (artificial kidneys) and physiological saline.

・For 1H (Apr-Sept) results of FY2020/3 announced on 7/11, net sales decreased by 2.6% to 11.324 billion yen compared to the same period the previous year, and operating income increased 8.6 times to 535 million yen.  Sales declined due to withdrawal from unprofitable businesses and sales decline of physiological saline. However, operating income increased owing to structural reforms and improvement in cost of sales ratio and reduction in personnel costs through cost reduction efforts.

・For its full year plan, net sales is expected to decrease by 7.9% to 22.2 billion yen compared to the previous year, and operating income to increase by 50.4% to 900 million yen.  In the extracorporeal circulation business, the company has been withdrawing from unprofitable businesses and consolidating its sales bases.  Meanwhile, in the endovascular field, the company has been working on selecting and concentrating on businesses such as launching new products and expanding sales of stent grafts in Europe.  As international expansion of medical devices is a priority area of the government’s growth strategy, we can expect push factors going forward.