Japan-Weekly Strategy Report “ The Bank of Japan’s Fixed-Rate Purchase Operations and the Yen Depreciation Market, and the Rise in Demand for Travel & Leisure ” June 29, 2022 86 “The Bank of Japan’s Fixed-Rate Purchase Operations and the Yen Depreciation Market, and the Rise in Demand for Travel & Leisure”

While the long-term interest rate was being adjusted by the Bank of Japan to shift within a fluctuation range of “about 0% and +-0.25%”, temporary measures known as the “fixed-rate purchase operations for consecutive days” were implemented for 3 days between 29th-31st March which made unlimited purchases of the 10-year Japanese government bonds at a yield of 0.25%. Due to the increase in the difference between the Japanese and U.S. long-term interest rates following the increase of the U.S. 10-year government bond yield to close to 2.5% as well as the growing observation of implementing multiple large interest rate increases of 0.5% on policy interest rates by the U.S. FRB, on the 28th, the depreciation of the yen against the dollar progressed to a level of 125 yen to 1 USD since August 2015. Regarding the yen depreciation, perhaps it was also supported by concerns of a current account deficit becoming commonplace for Japan, which relies on thermal power generation as a result of persistent skyrocketing energy prices due to the drawn-out Russian invasion of Ukraine.

Regarding whether there will be a stronger forecasts of large interest rate increases by the FRB due to the confirmation of a strained labour market from the U.S. employment statistics announced on 1/4, and whether Japan’s current account balance and trade balance for February announced on 8/4 will spur concerns of falling to a country with a current account deficit, etc., there will likely be attention on the trends of both the WTI crude oil futures market and the U.S. bond market. As a stock that will benefit from the depreciation of the yen, we can consider Nintendo (7974), which as a high cash holding ratio in foreign currency denominations from the planned release of “Nintendo Switch Sports” on 29/4, and on the other hand, as a stock that will benefit from a yen appreciation in the direction of keeping an eye on a reversal to a yen appreciation, there is Nitori Holdings (9843), which imports and sells overseas-produced products in Japan.

The semi-emergency coronavirus measures were lifted for all prefectures in Japan on 21/3 and it appears that there has been an increase in expectations of a recovery in travel and leisure demand. Regarding COVID-19, although progress in its replacement to the Omicron subvariant “BA.2” and the implementation of a large-scale city-wide lockdown in China’s Shanghai City are source material for concern, if the strain on hospital beds can be avoided from the popularisation of added vaccinations, perhaps it would not hinder economic reopening and normalisation.

In addition to those related to travel, such as the use of airplanes and hotel accommodations, etc., there will likely be consideration on the selection of stocks to buy from the perspective of leisure as well. In the U.S. market, similar to the near-10% increase in stock price of Canada’s womens casual sportswear giant Lululemon Athletica the day after announcing their strong business results forecast on 29/3, there will likely be attention on outdoor-related sports and fashion towards the reopening of the economy in Japan as well. Perhaps those that would match well with outdoor would be the competition shoes, sneakers and competition wear Asics (7936); Uniqlo’s Fast Retailing (9983), which is also strong in casual sportswear; the comprehensive outdoor Snow Peak (7816), such as automobile camping; as well as Kyoritsu Maintenance (9616), which has been popular for its free “Yorunaki Soba” at their accommodation hotels (Dormy Inn) after an excursion. 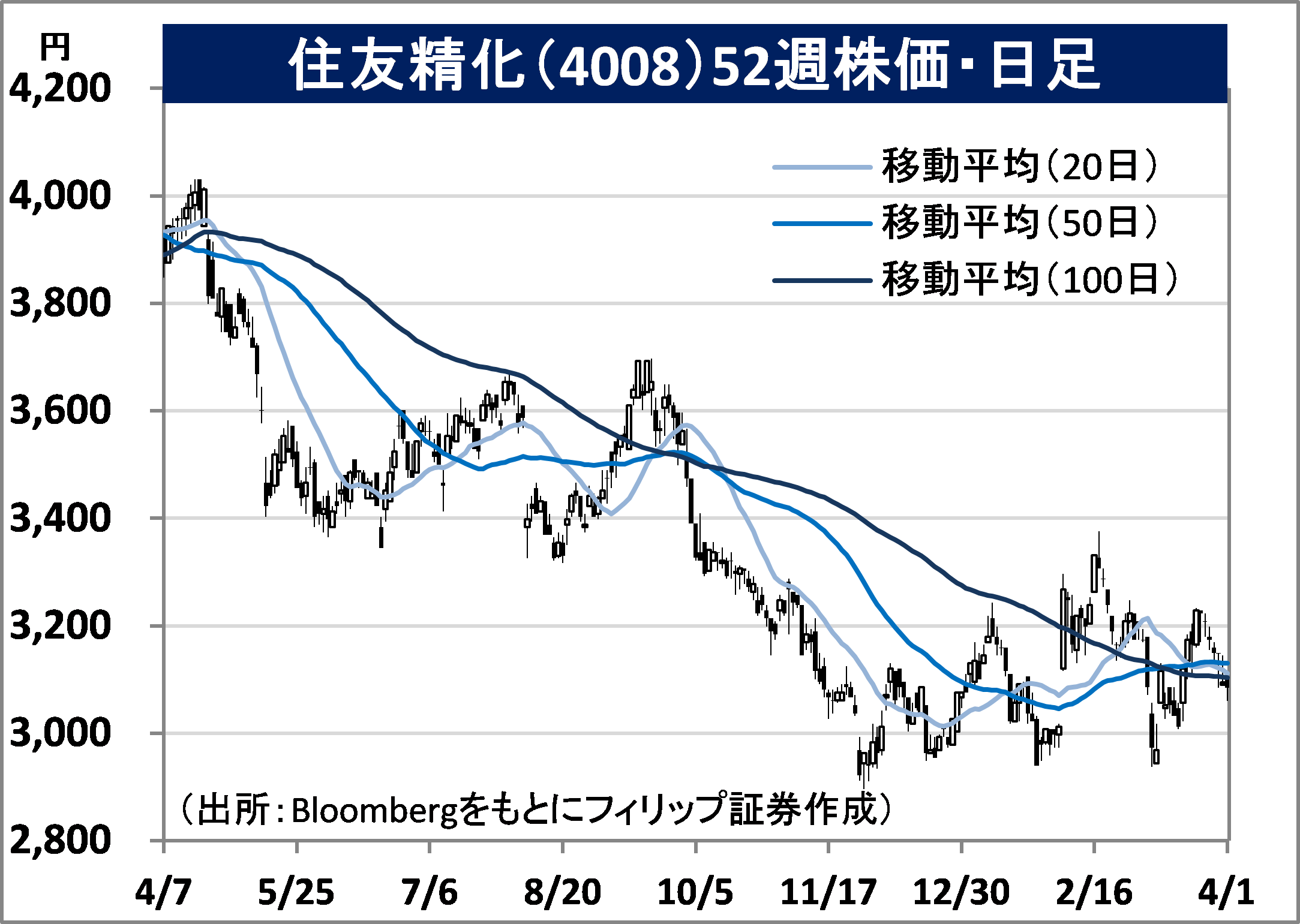 ・Established in 1944 via joint investment between Sumitomo Chemical (4005) and Taki Chemical (4025). Sumitomo Chemical currently owns 30%. Operates 3 mainstay businesses, which are absorbent resins, where its strength is in those used for paper diapers; functional chemicals; and gases and engineering.

・For 9M (Apr-Dec) results of FY2022/3 announced on 3/2, net sales increased by 11.9% to 84.234 billion yen compared to the same period the previous year and operating income decreased by 14.1% to 6.556 billion yen. Despite an increase in revenue and operating income in functional chemicals as well as gases and engineering, absorbent resins which account for 67% of net sales increased in revenue by 13.6%, however, the increase in distribution expenses and prices of raw materials and fuel have affected, which led to a 51.5% decrease in operating income.

・Company revised its full year plan upwards. Net sales is expected to increase by 11.4% to 115 billion yen compared to the previous year (original plan 109 billion yen) and operating income to decrease by 20.8% to 8 billion yen (original plan 7 billion yen). In the Chinese market, an alleviation of the burden of raising children in households with children was announced in the “National People’s Congress”, and strong performance is predicted in the paper diapers market. Also, on 31/3, Japan’s Ministry of Economy, Trade and Industry announced a policy on the stable supply of essential goods. The policy which advances the domestic production of gases for semiconductor manufacturing up to 2025 will likely be beneficial. 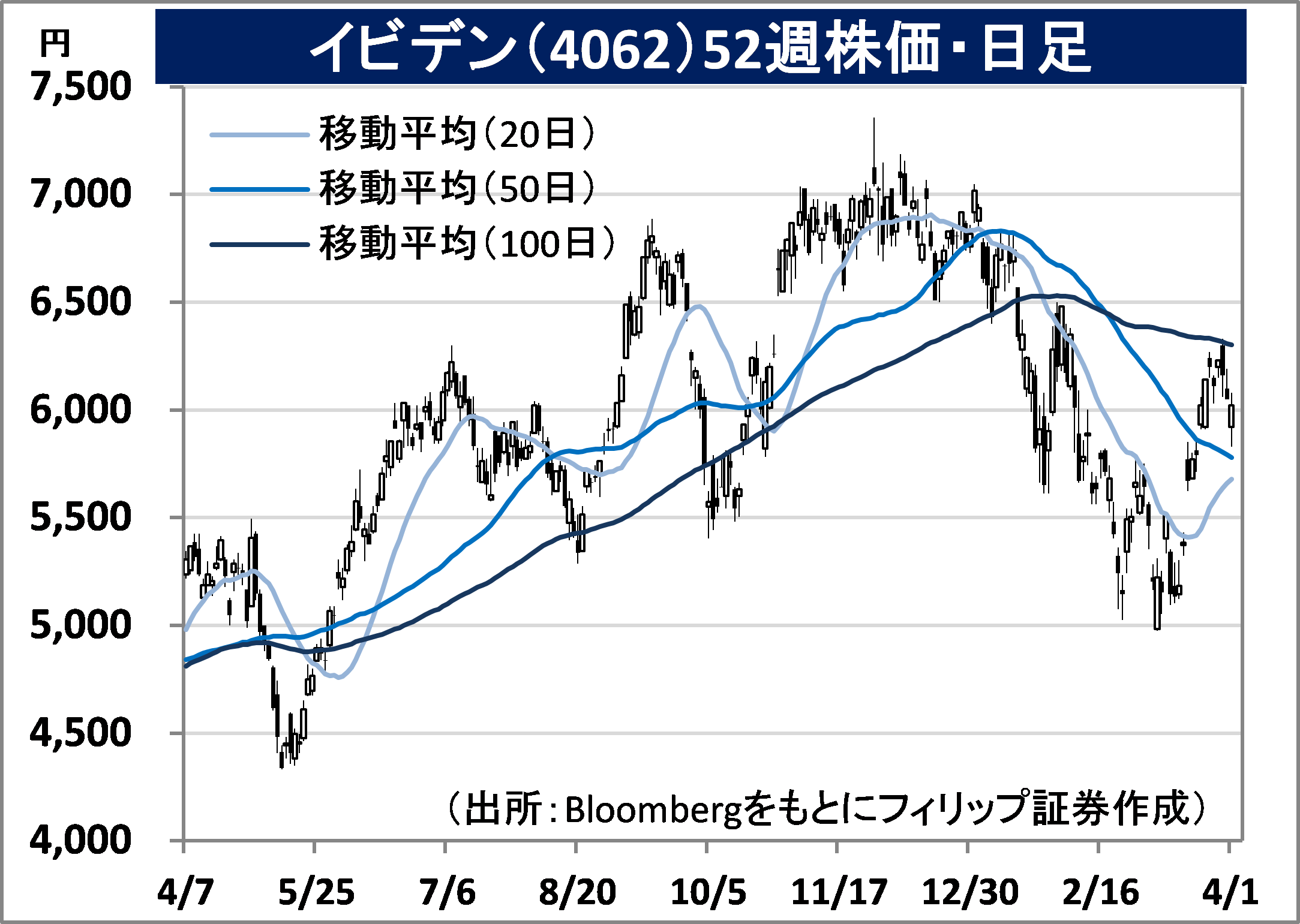