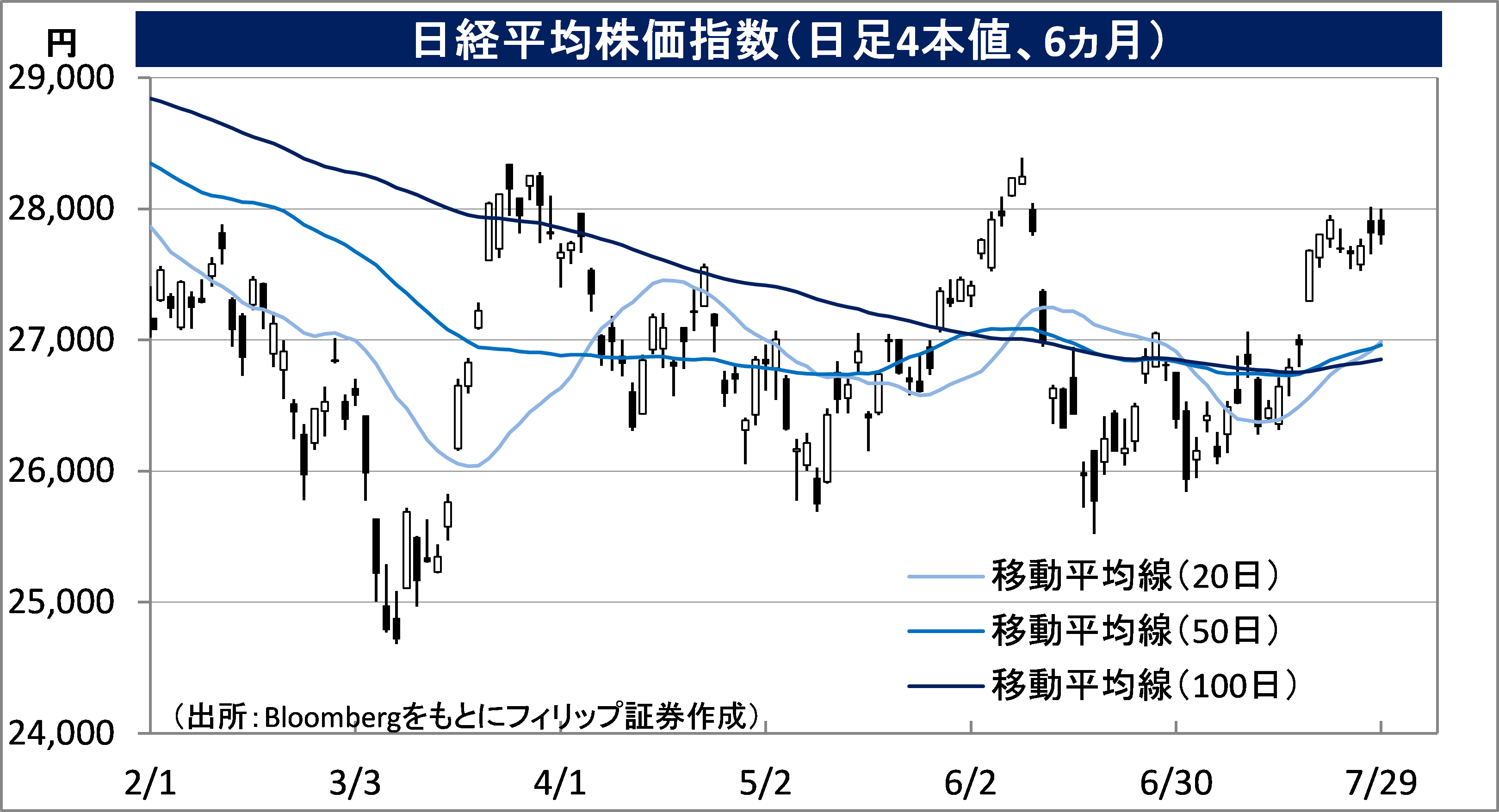 The yen is currently appreciating against the dollar.  It was announced at 3:00 am Japan time on 28/7 at the US FOMC (Federal Open Market Committee) meeting that the upper limit of the guidance target for the policy rate, the FF (Federal Funds) rate, would be raised by 0.75 points to 2.50%.  Fed Chairman Jerome Powell, in his press conference, noted that there are signs of a softening in the US economy, saying, “We will only provide guidance at each subsequent meeting and leave it to the data to guide us going forward”.  Because of this, “CME Fedwatch” is forecasting that the market forecast for the policy rate has a 77% probability of only a 0.50% hike for the next FOMC meeting in September, and the majority forecast at year-end is 3.25%, a significant drop from the majority forecast of 3.75% about a month ago.

Against this backdrop, the dollar-yen exchange rate saw the yen appreciating from the closing price of 136.62 yen per dollar on 27/7  to the 132 yen per dollar level around 12:40 pm Japan time on 29/7.  The Nikkei Average was pushed back by selling pressure from the 28,000 point level for the second consecutive day due to the headwind from such rapid yen appreciation and dollar weakness, despite positive factors such as Apple’s April-June financial results released on the morning of 29/7 (Japan time), which showed that the iPhone had maintained revenue growth, and the passing of the semiconductor subsidy bill by both the House and Senate in the US.

In contrast, lower long-term US interest rates and a weaker dollar have energized the commodity markets.   At market closing on 28/7, CMX gold futures were up 2.1%, CMX silver futures were up 7.5%, and CBT wheat futures were up 3.4% on the previous day.  Stocks that are likely to benefit from rising market prices, such as energy, precious metals, nonferrous metals, and grains, may be seen as good buying opportunities.

Among the major US companies, one stock that has a broad impact on the performance of Japanese companies is Boeing (BA), the world’s largest aircraft manufacturer.  Boeing’s April-June 2022 financial results showed that deliveries of the smaller “737MAX” aircraft had more than doubled from the same period last year, and that preparations to resume deliveries of the midsize “787” aircraft were in the “final stages.  The following are therefore probably familiar faces: Mitsubishi Heavy Industries (7011), Kawasaki Heavy Industries (7012), Subaru (7270), and Nikkiso (6376) for wings and fuselages, Toray (3402) for carbon fiber, Bridgestone (5108) for tires, Toho Titanium (5727) for titanium, Jamco (7408) for kitchen/toilets, Nabtesco (6268) for flight control, and Sumitomo Precision Products (6355) for auxiliary power units.

For FY2023/3 plan, net sales is expected to increase by 19.2% to 80.0 billion yen compared to the previous year, operating income to decrease by 22.2% to 3.0 billion yen, and annual dividend to decrease by 15 yen to 50 yen.  In the first year of the new medium-term management plan, company plans to strengthen investment in new product development.  On 25/7, company announced an order for two EDU (drive unit) assembly lines for EVs, a large project worth over 10 billion yen.  Also of note is that TSMC, the world’s largest semiconductor foundry, is building a plant in Kumamoto Prefecture, where the company is based.

In 2003, the former Teijin Seiki and Nabco merged to form Nabtesco.  Company operates three solution businesses, namely, “Components” for industrial robot precision reduction gears, which accounts for 60% of the global market, “Transport” for railroad brakes, and “Accessibility” for automatic doors, which rank amongst the top in the world.

For 1Q (Jan-Mar) results of FY2022/12 announced on 28/4, net sales decreased by 2.3% to 70.386 billion yen compared to the same period the previous year,  and operating income decreased by 24.9% to 4.995 billion yen.  Continued high demand for industrial robot precision reduction gears was offset by lower demand for hydraulic equipment in China, as well as lower demand for railroad rolling stock equipment in Japan and China.  Final deficit due to appraisal loss of investment stocks.

For its full year plan, net sales is expected to increase by 6.7% to 320.0 billion yen compared to the previous year, operating income to increase by 9.9% to 33.0 billion yen, and annual dividend to increase by 1 yen to 78 yen.  Company is providing Boeing (BA) with “Flight Control Actuation”, which hydraulically controls the flight attitude (climb, descent, and turn) of an aircraft.  In its April-June 2022 financial results reporting, Boeing announced that it had secured a profit for the first time in four quarters and that it was in the final stages of resuming shipments of the 787, a mid-size aircraft of which deliveries had been halted.