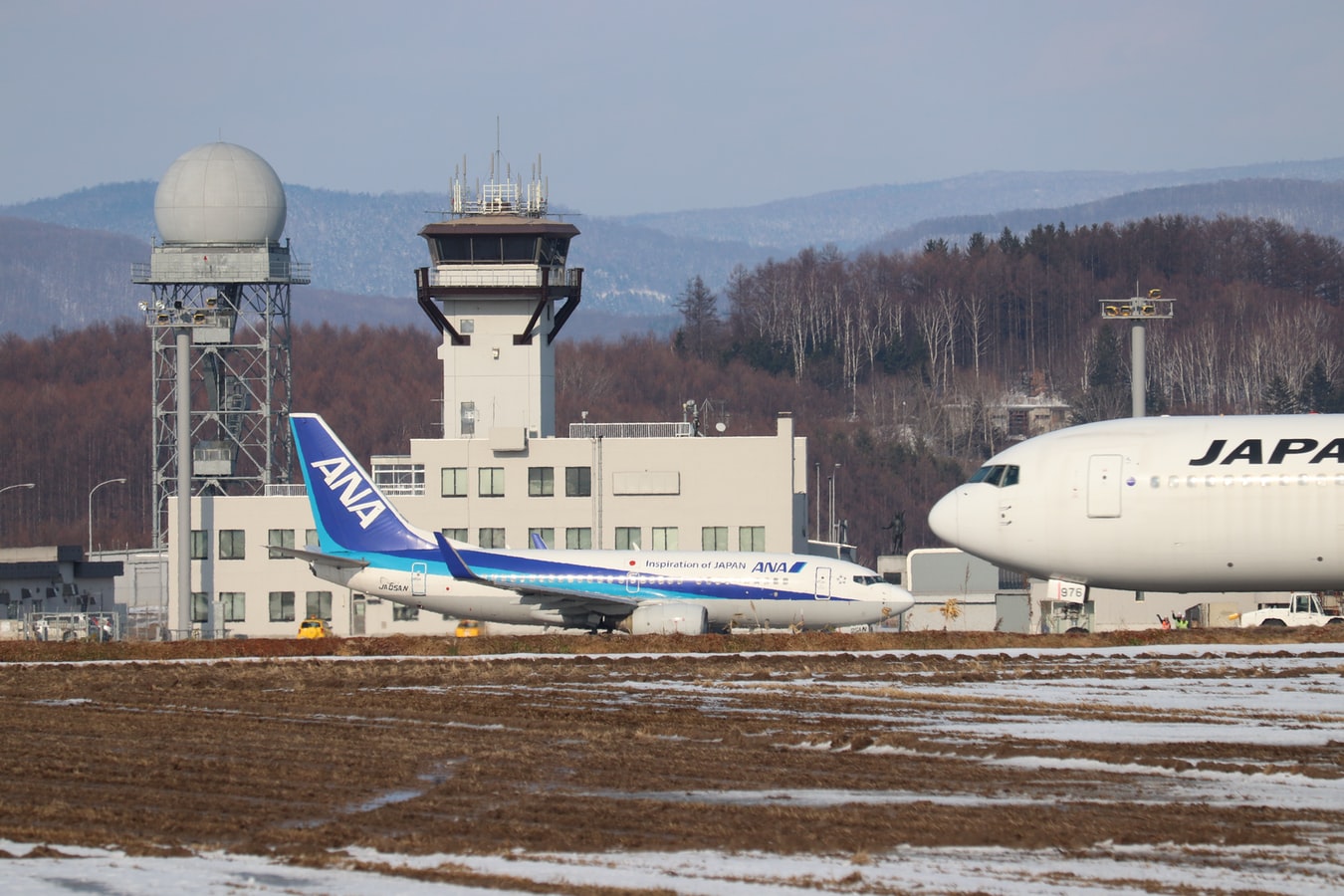 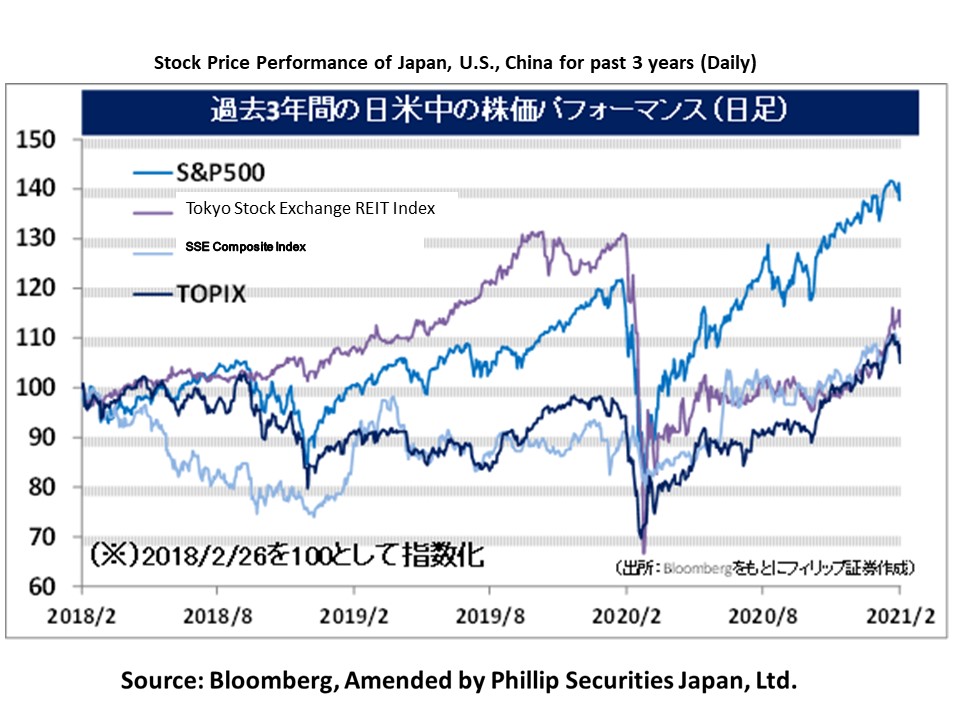 In the previous week’s 22nd February 2021 issue of our weekly report, we mentioned that there is an aspect where the conditions are met for the stock market to shift to an adjustment decline due to the Nikkei average’s weighted average P/B ratio (price-to-book ratio) reaching a high level that exceeded 1.3 times which was last seen 3 years ago on 2nd February 2018, and the accelerated increase in U.S. long term interest rates similar to 3 years ago. With the growing prediction in the market on early monetary tightening as a result of the emergence of risks of a price upturn in the U.S., U.S. FRB Chair Powell stressed in his testimony at Congress on 23-24/2 that there will be no changes to the monetary policies until there are clear improvements in the economy. Regardless, it did not stop the increasing yield trend in the U.S. bonds market, with U.S. 10-year government bonds reaching 1.6% at one point on 25/2. Perhaps we can perceive the significant increase even in the short-term 2-year and 5-year bonds, which tend to be linked with the FRB’s monetary policies and policy interest rates, to be excessive risk-off sentiment. The rise in risk-off sentiment also influenced the Japanese stock market, and the closing price for the Nikkei average fell drastically by 1,202 points to 28,966 points on 26/2 compared to the previous day.

In contrast to the gentle monetary easing stance taken by the U.S. FRB in 2018 to reduce the total amount in the balance sheet, currently, they are keeping a strong stance on monetary easing in order to increase the total amount in the balance sheet via bond purchasing. In that sense, for Japanese stocks, even if an adjustment decline occurs in the stock market, there is a high chance that it will end in the short-term earlier than that in Spring 2018. If there is an overlap of a decline due to seasonal factors, such as selling off in order to review holdings of cross-shareholdings as a measure for the end of period settlement in March, etc., it could be taken as an opportunity for investors to buy from the middle of the year to the year end.

The increase in U.S. long term interest rates which brought about fluctuations in the stock market is a reflection of expectations towards a normalisation of the economy from the popularisation of the COVID-19 vaccine and the conclusion of additional large-scale economic measures in the U.S. In that sense, for the future stock market, it is believed that there will be a high likelihood of focus on the increase in demand for aircrafts along with a travel demand. Amongst them, regarding aircraft demand, it is said that aircraft production is an extensive industry similar to automobiles with many corporations in charge of the manufacture of its components and parts, and eventually forms the industry structure that assembles Boeing and Airbus. Especially for Boeing, there are numerous stocks that are called “Boeing-related”, such as 3 Japanese companies which are Mitsubishi Heavy Industries (7011), Kawasaki Heavy Industries (7012) and Subaru (7270), which develop and manufacture the wings of Boeing aircrafts and a large percentage of its airframe, in addition to Toray Industries (3402), which carries out a joint development of carbon fibres for main structural parts, etc. There is a possibility that the recovery in aircraft demand will become a driving force for improvement in business performance for Japanese corporations that have had their business performance affected by the fall in demand for aircraft components. 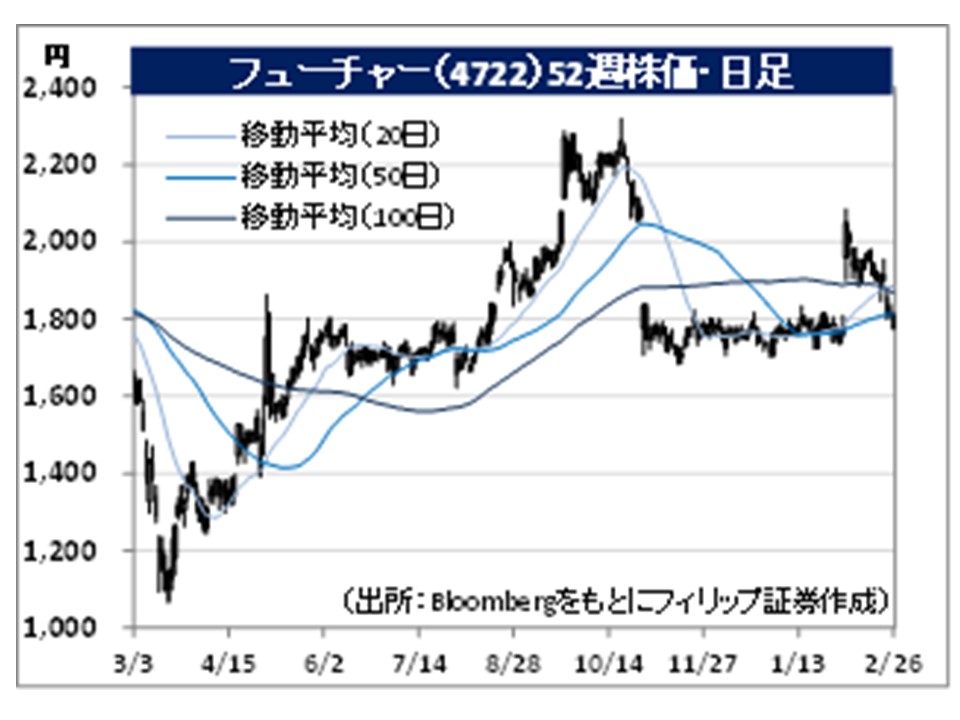 ・Established in 1989. Mainly handles digital transformation (DX) for client corporations with a focus on work systems, and expands the IT consulting & services business and the business innovation business.

・For FY2020/12 results announced on 4/2, net sales decreased by 2.4% to 44.311 billion yen compared to the previous year and operating income decreased by 19.8% to 5.235 billion yen. Although there was an increase in income and profit in their business innovation business due to an expansion of online teaching and indoor training demand, IT investment curbs in some clients, etc. in their IT consulting & services business influenced the decrease in sales and income.

・For its FY2021/12 plan, net sales is expected to increase by 7.2% to 47.5 billion yen compared to the previous year and operating income to increase by 36.6% to 7.15 billion yen. Their subsidiary, Future Architect, implemented the financing support system “FutureBANK” successively to Chiba Bank in addition to the member bank, “TSUBASA Alliance”, which consists of 11 banks with The Gunma Bank becoming a member in December last year. Also, on 15/1, the subsidiary announced a business alliance with SBIHD (8473) on the development of an accounting system for local banks. 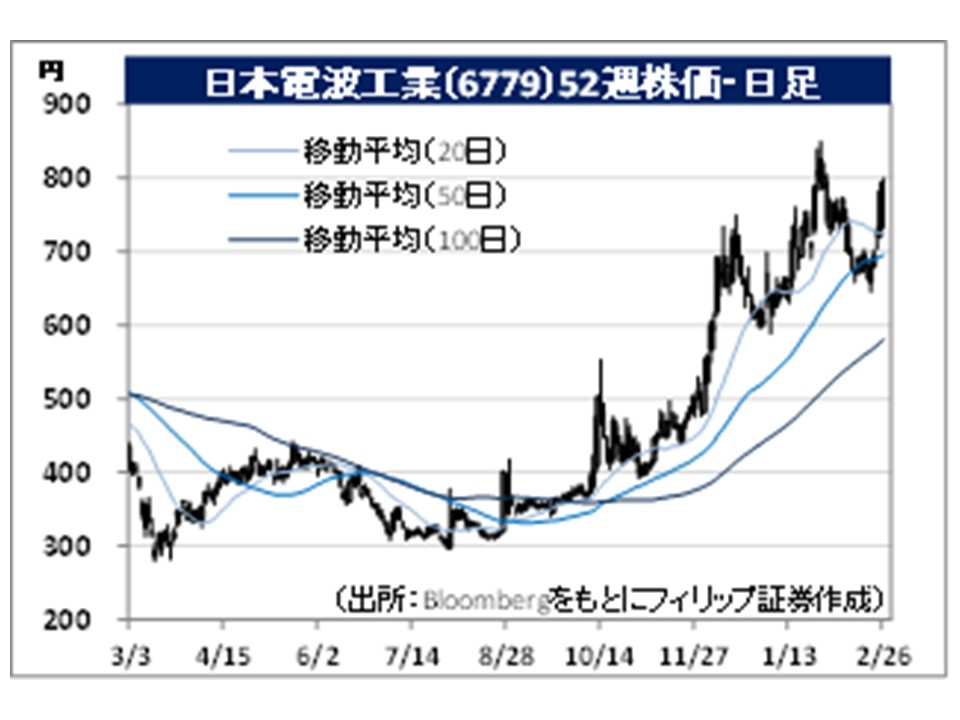 ・For its full year plan, net sales is expected to decrease by 1.4% to 38.9 billion yen compared to the previous year and operating income to return to profit from (8.286) billion yen the previous year to 2.4 billion yen. In addition to an upward revision of net sales due to a continuous increase in orders received for in-vehicle, operating expenses are predicted to record 600 million yen as a result of bringing forward the structural reform. There is an expected increase in demand for crystal devices for 5G communication standards following the popularisation of 5G service worldwide. Current stock price is approximately at the level of 1/10 of its high in October 2007.