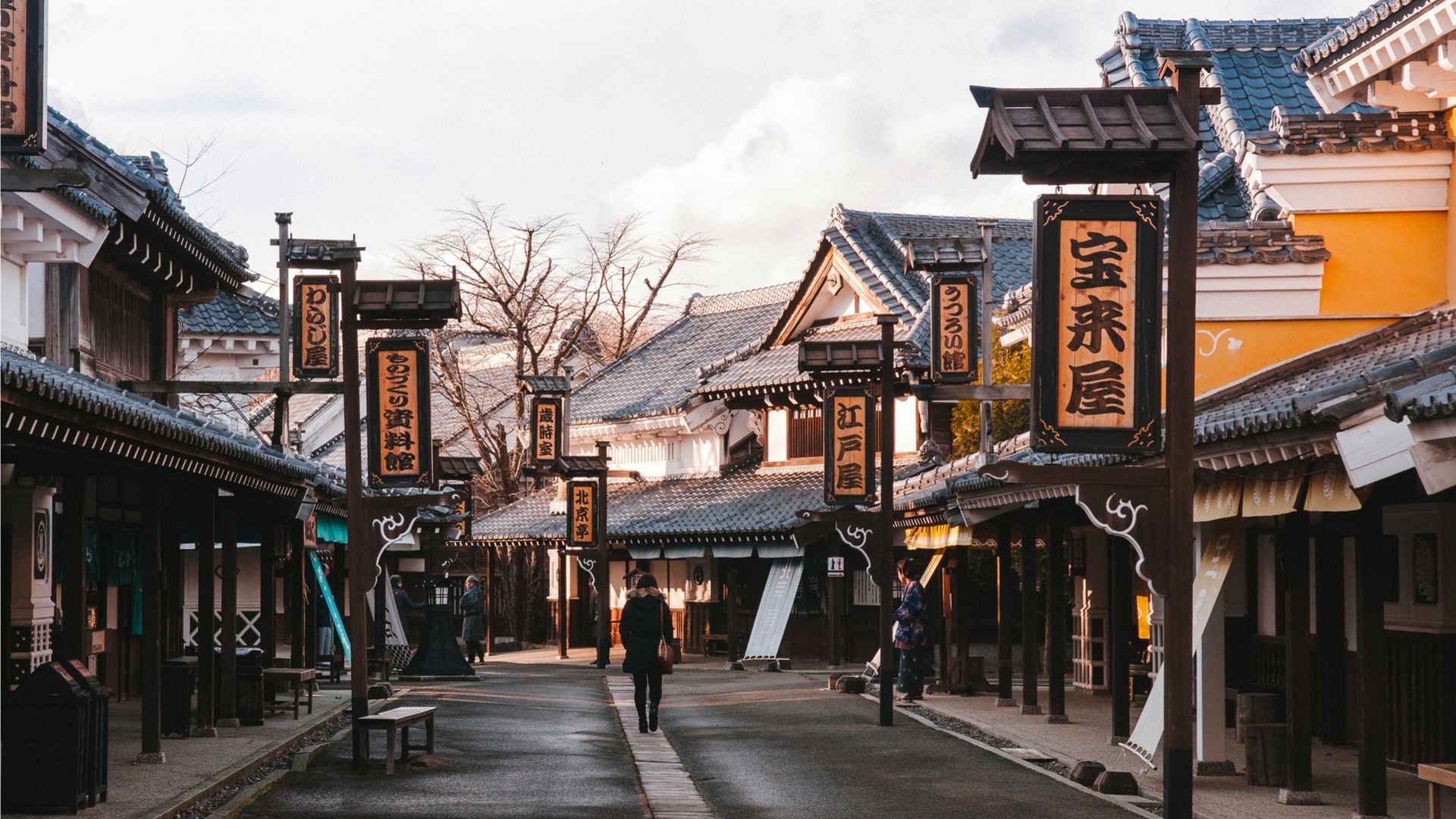 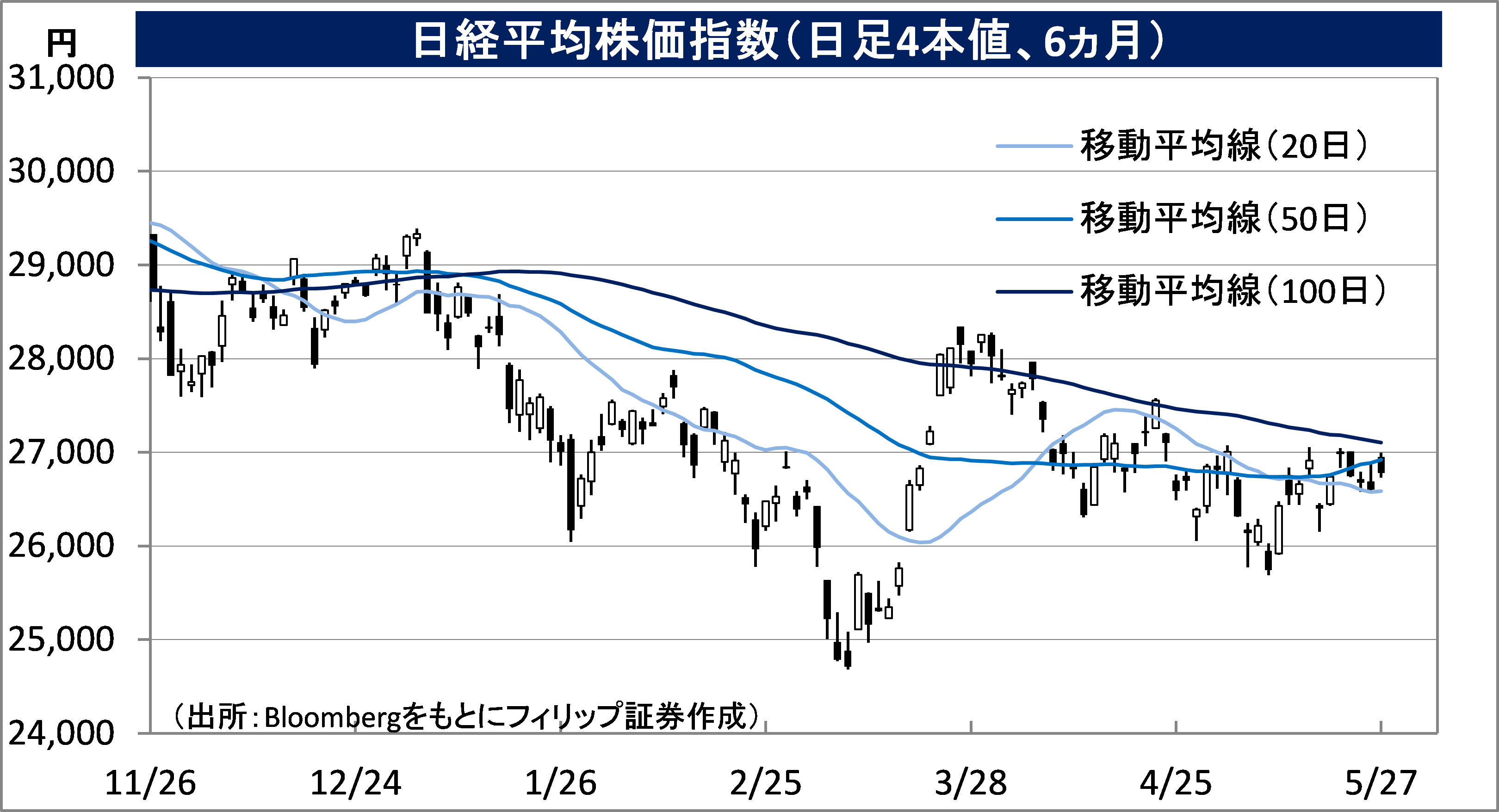 The two days of May 23 and 24 may have been important political / economic dates for Japan and the world.  The content was substantial, at least in terms of suggestions for equity investment.  On 23/5, the US-Japan Summit was held, and the US-led “Indo-Pacific Economic Framework (IPEF)” was launched by a total of 13 countries, namely Japan, the US, Korea, India, Australia, New Zealand, and seven ASEAN countries.  On the same day, India’s PM Modi met separately with Suzuki (7269) Chairman Suzuki, NEC (6701) Chairman Endo, Fast Retailing (9983) CEO Yanai, and Softbank Group (9984) Chairman Son.  On the following day, 24/5, the leaders of the Quad, an international framework for security consisting of Japan, the US, Australia, and India, held a summit meeting.  Overseas, the World Economic Forum (Davos Meeting) was held in Switzerland from 22-26/5.

At the Japan-US summit, PM Kishida announced a “substantial increase in defense spending,” and President Biden stated that the US would be militarily involved in Taiwan’s defense in the event of a conflict in Taiwan.  In response, Chinese and Russian bombers capable of carrying nuclear weapons flew over the Sea of Japan and the East China Sea in a joint flight.  On 25/5, North Korea launched a ballistic missile, and the Japanese and US foreign ministers shared their “serious concerns” over the event.  Next, Fiji, an island nation, announced its participation in the IPEF on 26/5, bringing the total number of participating countries to 14.  “Fair and Resilient Trade”, “Supply Chain Resilience”, “Infrastructure, Decarbonization and Clean Energy”, and “Taxes and Anti-Corruption” are considered the four pillars that make up the IPEF.

In separate meetings between Indian PM Modi and the four companies, it appears that they discussed investment in electric vehicles (EVs) and batteries with Suzuki, a “textile park project” with Fast Retailing to develop industrial parks dedicated to the textile and clothing industry in various locations, and support for additional investment in India with Softbank Group.  The Quad’s summit meeting is said to be aimed at countering China by strengthening the supply networks of the four countries, mainly in the economic and advanced technology fields where the US is battling for supremacy with China.  With regard to 5G, there is a hint of an objective to counter Huawei, a major Chinese telecommunications equipment company, by adopting an “Open RAN” approach to utilize equipment and systems from multiple companies in the construction of cell phone base stations.  That could have been a central theme during PM Modi’s meeting with NEC.  Anritsu (6754), a telecommunications-based measuring instrument company, is also a member of the “O-RAN Alliance”, an international industry association for Open RAN, and is therefore expected to benefit.

At the Davos meeting, International Energy Agency (IEA) Executive Director Birol stressed the need to expand the use of nuclear power plants in response to the worsening energy crisis.  As if in response, it was reported that the governor of Shimane Prefecture in Japan has veered towards agreeing to the restart of the No. 2 reactor of the nuclear power plant in that prefercture. 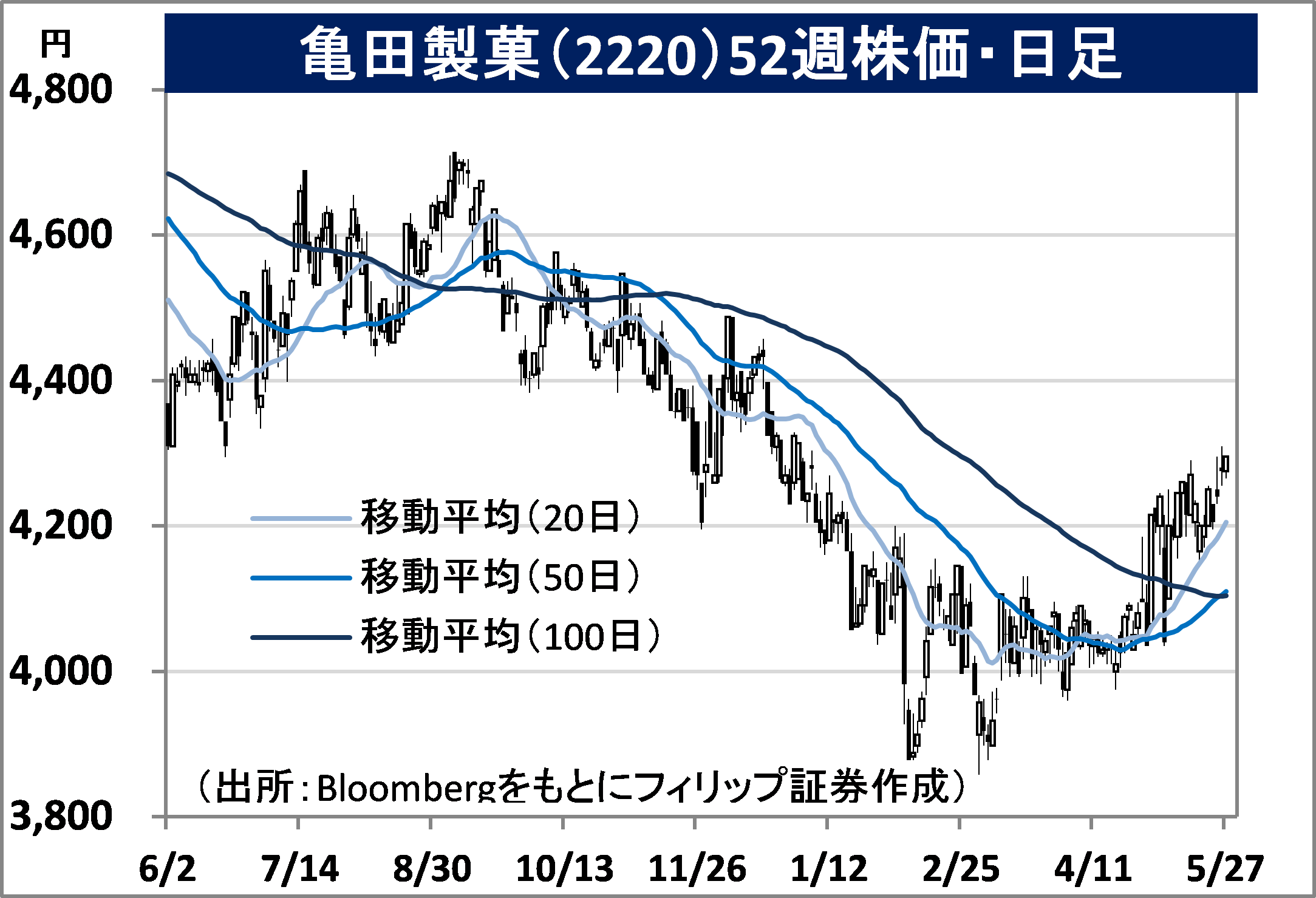 Established in Kameda-cho, Nakakanbara-gun, Niigata Prefecture in 1957.  Company’s main business is the manufacture and sale of confectioneries, while operating a domestic rice-based snack business, an overseas business, a food business, and other businesses such as freight forwarding.  Top domestic producer of rice-based snacks such as senbei rice crackers.

For FY2022/3 results announced on 9/5, net sales increased by 2.5% to 85.163 billion yen (retroactive application of revenue recognition accounting standards) compared to the previous year, and operating income decreased by 13.5% to 4.863 billion yen.  Overseas operations performed well with a 21% increase in sales and a narrowing operating loss, but the mainstay domestic rice-based snack business suffered from soaring raw material prices and energy price hikes, resulting in an overall decrease in operating income.

For FY2023/3 plan, net sales is expected to increase by 8.0% to 92.0 billion yen compared to the previous year, and operating income to increase by 2.8% to 5.0 billion yen.  Company has been selling India’s version of kaki-no-tane (literally “persimmon seeds”), “Kari-kari” (Japanese equivalent for the word “crunchy”), since 2020 in more than 1,000 stores in major cities, and through online sales.  In recognition of his achievements, Indian-born VP Juneja is scheduled to become the new CEO as of 14/6.  He has a proven track record in the global commercialization of products from India and the establishment of food business brands such as rice-flour bread, and is expected to transform company into a comprehensive food business. 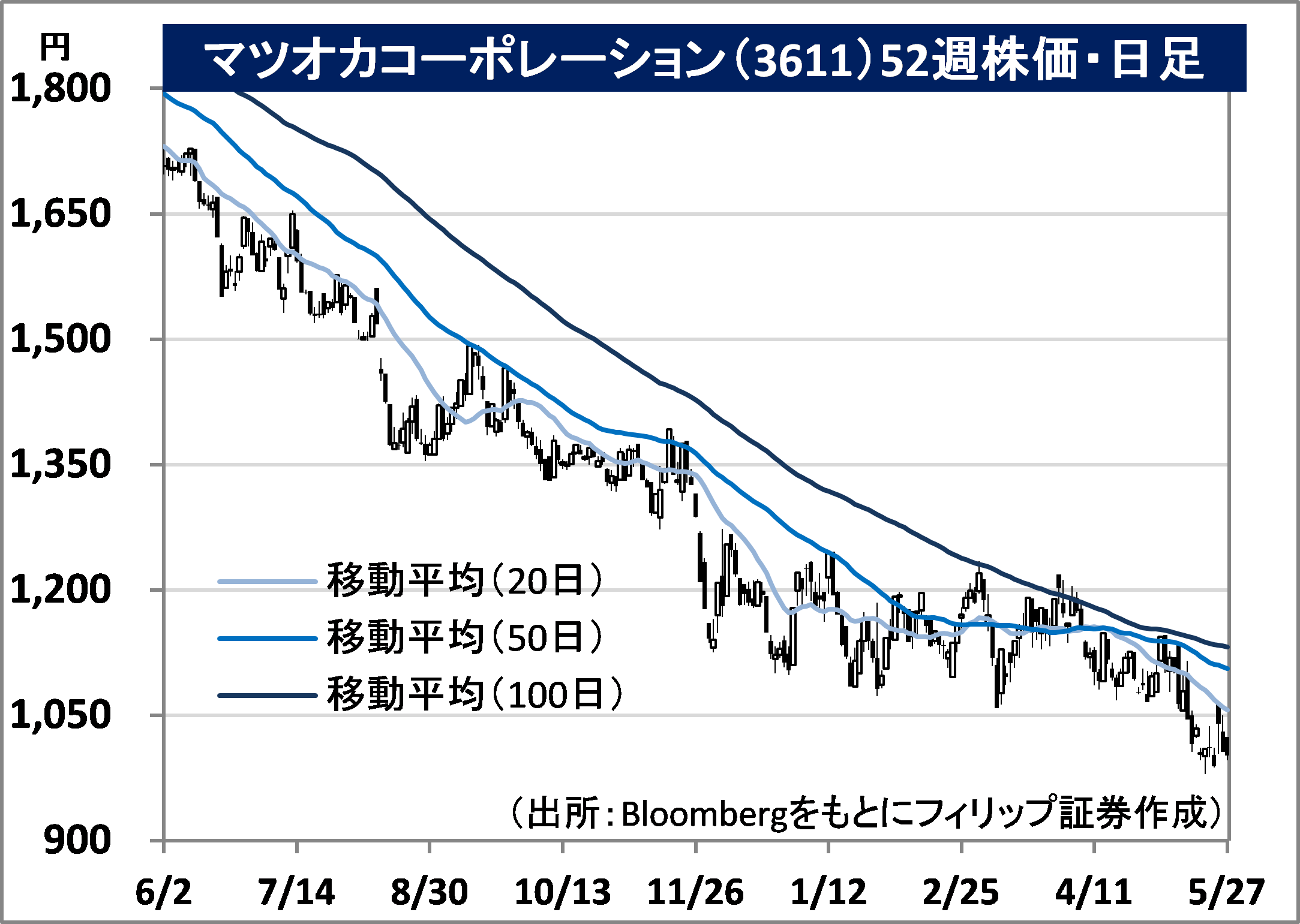 Founded in 1956 as Matsuoka Kimono Store.  Company operates an “apparel OEM business” in which it receives orders from apparel manufacturers, trading companies, and mass merchandisers to produce apparel under the consignor’s brand, including planning, manufacturing, and distribution.

For FY2022/3 results announced on 12/5, net sales decreased by 5.3% to 51.056 billion yen compared to the previous year, and operating income decreased by 96.0% to 181 million yen.   Despite efforts to maintain production volume by utilizing its extensive network of production bases, company was affected by the prolonged spread of Covid-19 infection and the political upheaval in Myanmar, which led to restrictions and shutdown of plant operations, as well as international logistics disruptions.

For FY2023/3 plan, net sales is expected to increase by 9.7% to 56.0 billion yen compared to the previous year, operating income to increase 3.8 times to 700 million yen, while annual dividend will remain unchanged at 40 yen.  On 24/5, company announced its medium-term management plan, which aims for sales of 70 billion yen and ordinary income of 3.5 billion yen in the fiscal year ending 31st March, 2026.  In addition to establishing factories in Vietnam and Bangladesh where labor costs are low, company will focus on sportswear, and expand into automotive components with functional materials that utilize processing technologies involving moisture permeability and waterproofing.