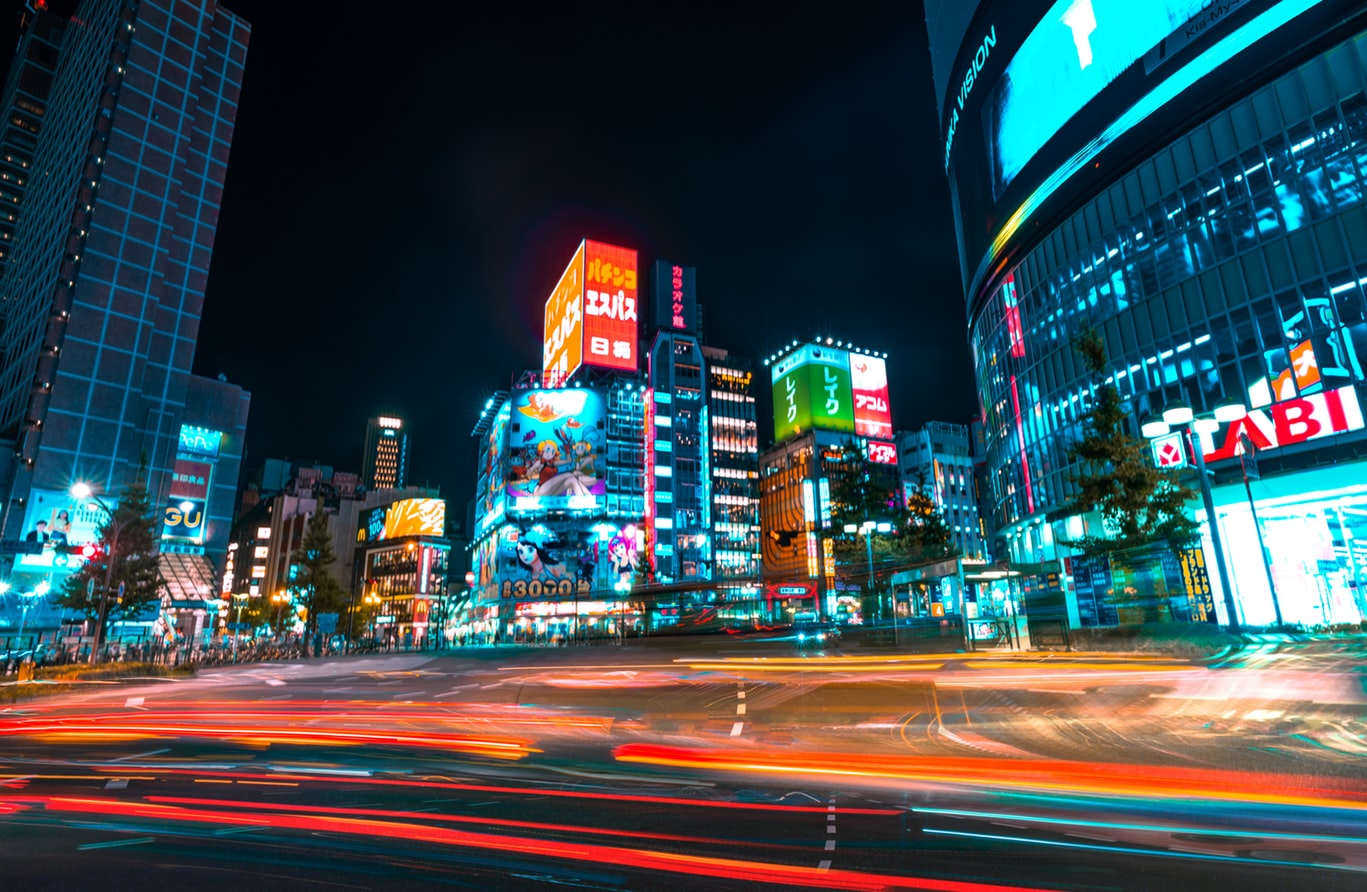 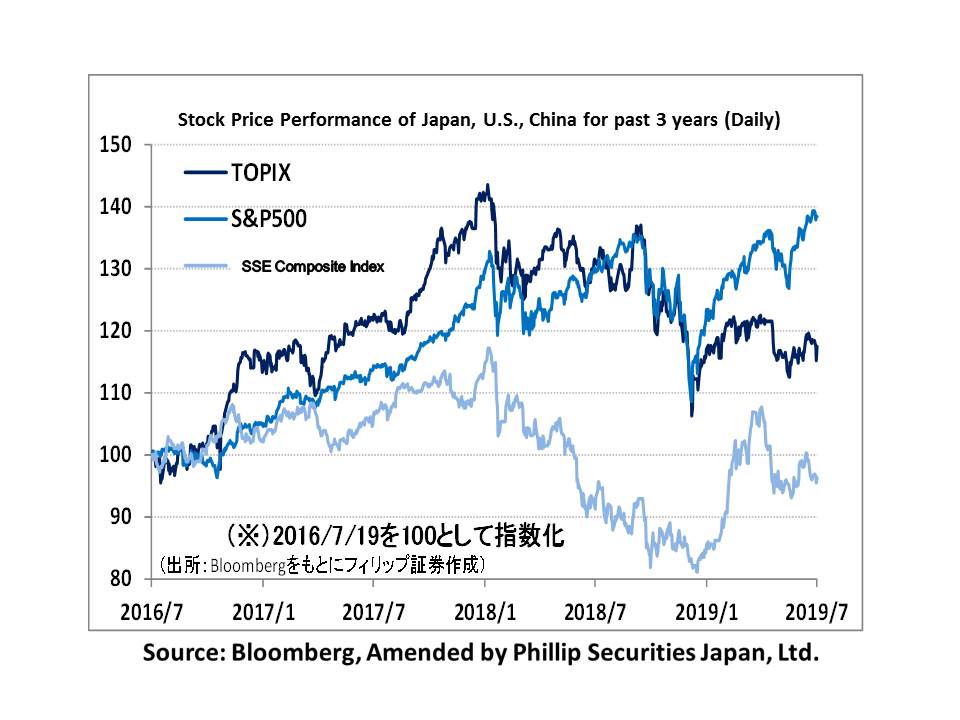 The Japanese stock market from 16/7 onwards contrasted with the steady US stock market with the Nikkei average falling below 21,500 points on 17/7, and then falling below the low of 21,000 points on 18/7, which saw a significant drop. With growing expectations of US interest rate cuts leading to an appreciation of the yen, which held back the rise in Japanese stock prices, along with a 70% year-over-year drop in net income in the Mar-May term’s financial results at Yaskawa Electric (6506), followed by the reported forecast of a downward revision of a 40% year-over-year decrease in operating income in the Jan-Jun term’s financial results at Canon (7751), which is scheduled to be announced on 24/7, it appears that there were concerns of consecutive forecasts of worsening business performance in the Apr-Jun term’s financial results, which will be shifting into high gear.

On the following day of 19/7, in addition to the factor of demand in easier repurchases due to a high short selling ratio, in overseas markets, a positive forecast indicated at the financial results announcement of Taiwan Semiconductor Manufacturing Company (TSMC) and the announcement of the Dutch ASML’s EPS exceeding market predictions, saw it active with repurchasing movements focusing on semiconductor-related stocks, which resulted in a significant high. The investment in new premium smartphone models, an acceleration in 5G compatibility, and logic semiconductors, etc. in the TSMC and ASML financial results announcements seemed to act as a strong prospective driving force. Also, within the “semiconductor-related”, it would be vital to continue monitoring from the viewpoint of mostly the relation between compatibility with 5G communication, etc. As of now, apart from Huawei, suppliers for 5G communication semiconductors are only limited to the US Qualcomm (QCOM), and it is likely that trends involving Qualcomm will prove to be crucial.

Aside from semiconductors, as 5G utilises higher frequency radio waves than the existing, they require the use of raw materials that enable easy transmission of radio waves, and glass is regarded as promising. Although the US Corning (GLW)’s “Gorilla glass” is gathering attention, AGC (5201) is also developing an integrated antenna glass for 5G, while

Teijin (3401) has also developed a reinforced plastic back panel for smartphones that use “aramid fibres”, which allow easy transmission of radio waves. In terms of 5G-related “raw materials”,   there may be a chance at winning for Japanese companies as well.

The rainy season’s cold this summer has lasted longer than expected, and the US National Oceanic and Atmospheric Administration (NOAA) announced a forecast on 5/4 of “the solar activity approaching a solar minimum period between the latter half of 2019 and the beginning of 2020”. This points to the increase or decrease in the number of sunspots in a fixed cycle, which is said to last for an average of 11 years. Although it would be very intriguing to consider its correlation with the cycle of economic activities, perhaps it would be difficult to disregard its effects on the aspect of physical health, etc. We want to ensure that we keep our health in tip-top condition. 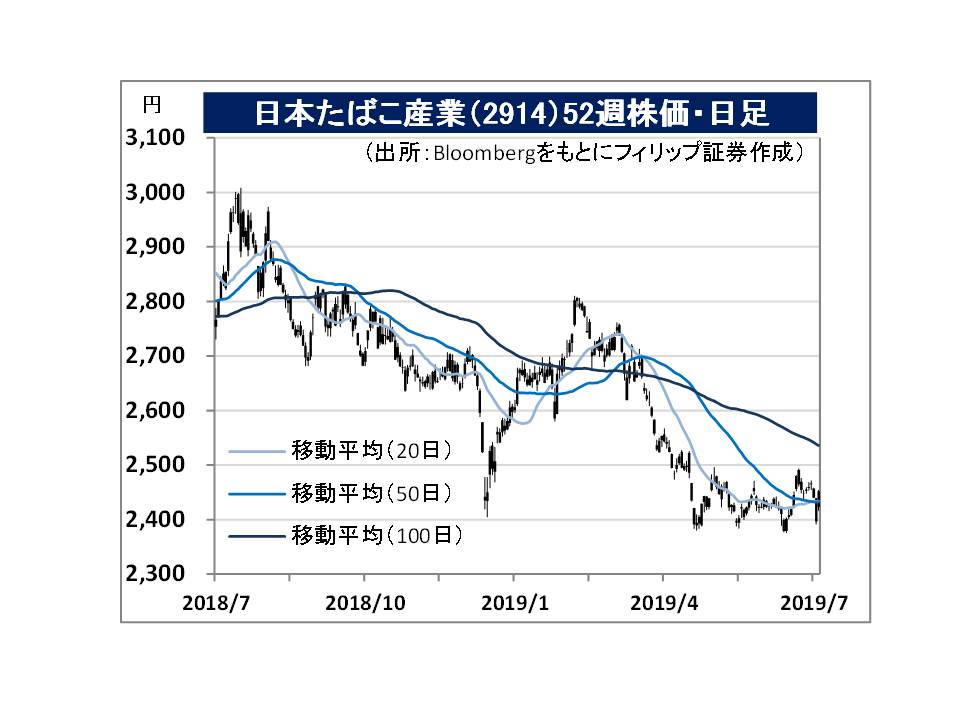 ・For 1Q (Jan-Mar) results of FY2019/12 announced on 26/4, sales revenue decreased by 1.9% to 505.422 billion yen compared to the same period the previous year, and operating income increased by 24.4% to 182.593 billion yen. Operating income after fixed adjustment to the exchange rate also increased by 7.2%. A rise in price in the domestic / overseas tobacco business along with the increase in sales of RRP (products that may reduce health risks) have contributed.

・For FY2019/12 plan, sales revenue is expected to decrease by 0.7% to 2.2 trillion yen compared to the previous year, and operating income to decrease by 4.4% to 540 billion yen. Phillip Morris International (PM) announced their 2019/2Q (Apr-Jun) financial results on 18/7 and revised their full year plan upwards due to good sales of their heated type tobacco, “IQOS” in Japan, etc. Although it has a lighter tobacco flavor than IQOS, due to sales expansion of “Ploom TECH”, which has less smoke smell, we can look forward to its good effect on business performance. 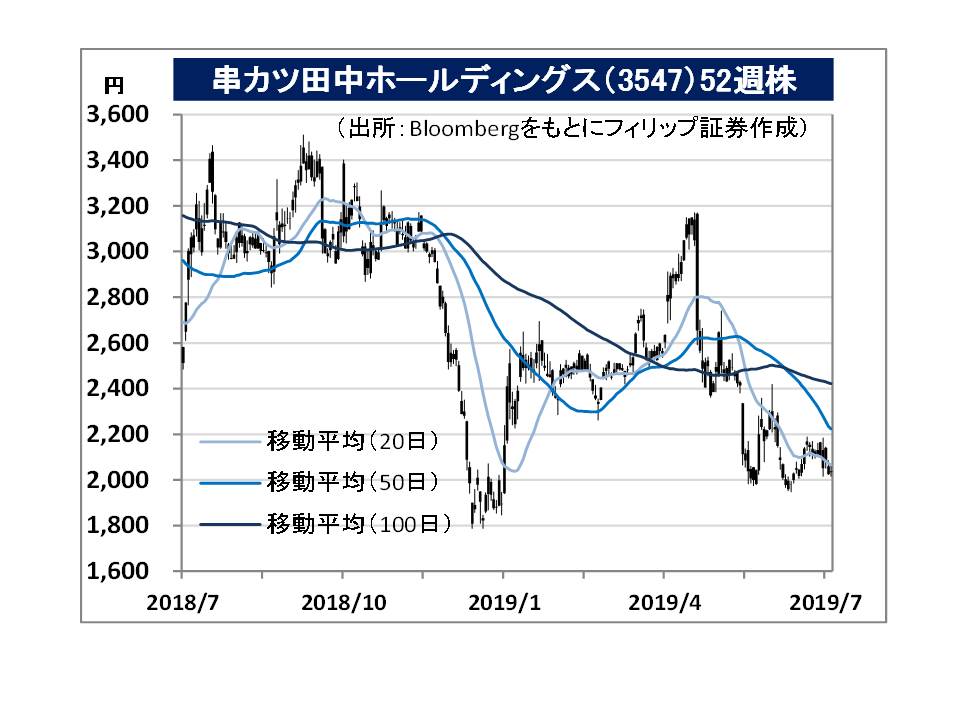 ・Founded in 2002. Based on their aim of “making Osaka’s traditional tasting kushikatsu a representative of Japanese food culture”, company expands directly managed and franchise chain restaurants focusing in the Kanto area. Began implementing all non-smoking seats / floor-separated smoking from 6/2018.

・For IH (2018/12-2019/5) results of FY2019/11 announced on 12/7, net sales increased by 39.8% to 4.682 billion yen compared to the same period the previous year, operating income increased by 41.3% to 303 million yen, and net income increased by 21.0% to 217 million yen. Due to an implementation of non-smoking, although customer transactions in the office worker category decreased, an increase in the number of customers in the family category has secured a 0.5% increase in net sales of their existing stores.

・For FY2019/11 plan, net sales is expected to increase by 26.5% to 9.7 billion yen compared to the previous year, operating income to increase by 5.4% to 590 million yen, and net income to decrease by 6.4% to 440 million yen. Increase in investment costs for growth are predicted from directly managed store openings and a renovation of deteriorating stores, etc. Company is narrowing down their target to the family category, and in addition to the change to non-smoking, company has opened a new business category store, which is a family restaurant-type roadside outlet. They will likely garner attention for their various initiatives in managing both non-smoking and an increase in sales.