Japan Weekly Strategy Report- Possibility of an “Abe-Trump Show” in the political arena? May 8, 2019 404 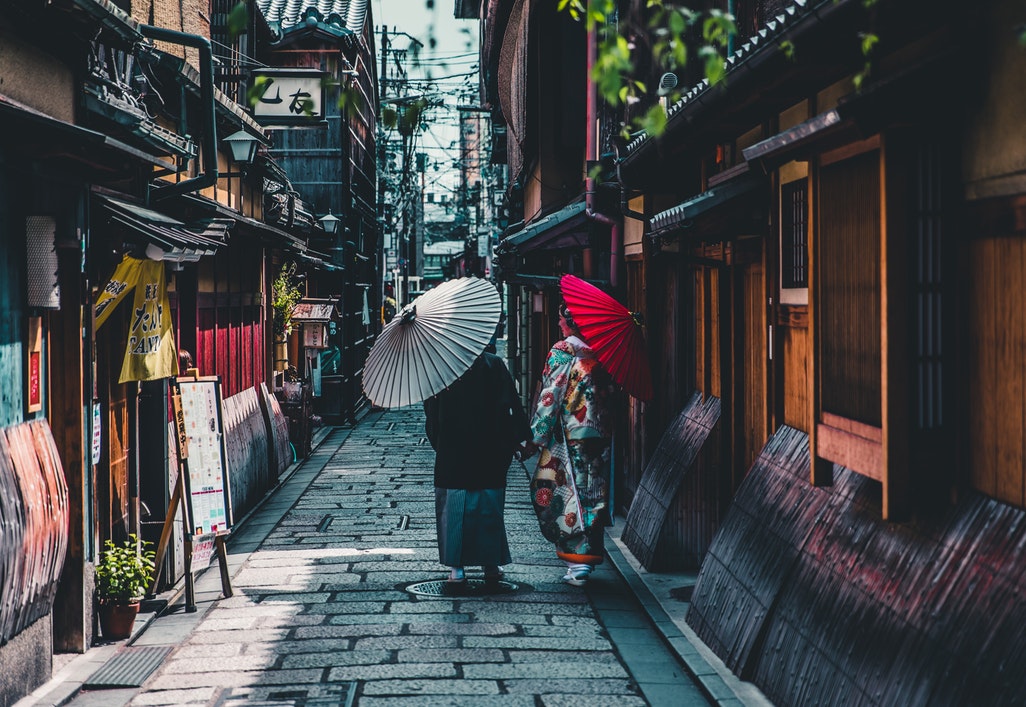 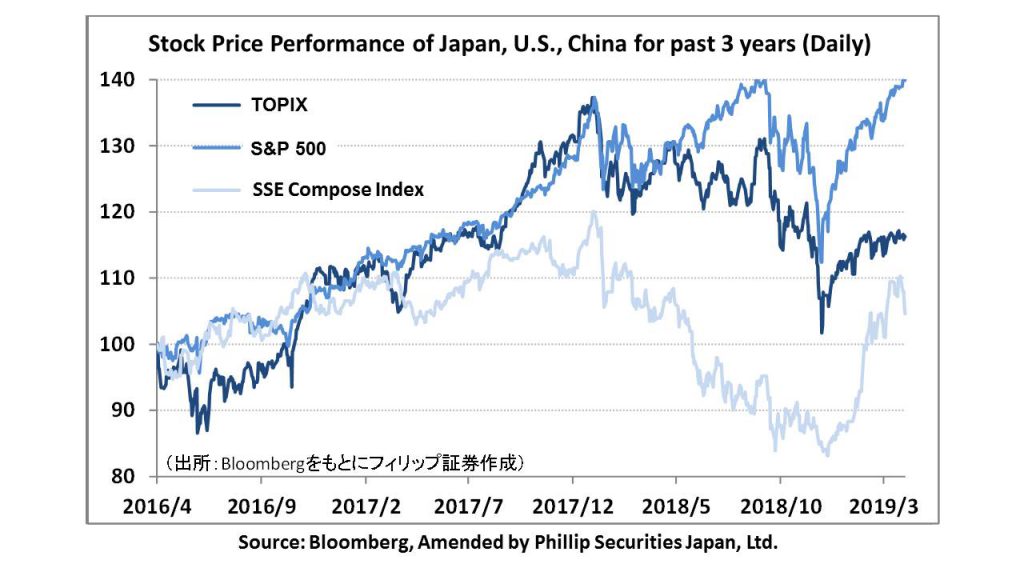 Possibility of an “Abe-Trump Show” in the political arena?

As stated in the 8/4 Weekly Report, we believe that, in the new financial year, there will be movements in the Japanese stock market in response to the House of Councilors election in July.   At this juncture, the postponement of the consumption tax hike has emerged as a major issue.

Both the NASDAQ and S&P500 closing prices have hit record highs with increasing expectations that corporate earnings announcements for the Jan-Mar period for US stocks will be better than market forecasts. The Japanese stock market has been quiet especially on 22-23/4 before the 10-day holidays.  With the delivery date for 24/4 contracts being only after the end of the long holidays, concerns about realizations and stop-loss selling have taken a backseat for the time being.  Expectations for the BOJ’s Monetary Policy Meeting on 25/4 and the Japanese yen’s depreciation have pushed the Nikkei average to the 22,300 points level.

On the other hand, regarding the issue of raising the consumption tax to 10% in October, on 18/4, Mr. Hagiuda, Executive Acting Secretary-General of the LDP, said that “there could be different developments depending on the figures of the June BOJ Tankan Survey”, thereby pointing out the possibility of postponement of the tax increase. Meanwhile, Chief Cabinet Secretary Suga had stated the traditional view that “the consumption tax will be raised to 10% in October unless there is an event arising equivalent to that of a Lehman-shock”. It therefore seems that the issue of the postponement of the consumption tax hike has suddenly broken out.

However, in the “March Economy Watchers Survey” issued by the Cabinet Office on 8/4, the DI for current conditions for all items had fallen below the standard value of 50.0, and that for future conditions for all items except “Services” had also fallen below 50.0, showing a worsening of results. There is strong concern that a recession might arise due to the consumption tax hike.  In addition, since last year, the Trump administration has intensified its criticism that the export drawback on consumption tax has amounted to an “export subsidy” for auto motives. Therefore, it is easy to imagine that the consumption tax hike will be singled out during the Japan-Trade Agreement on Goods (TAG) negotiations on 15-16/4.  For President Trump, who is aiming for re-election in 2020, he cannot afford to lose the casting votes held by the “Rust Belt” (rusted industrial area) states of Ohio and Pennsylvania. Protection of the US automobile industry, which is at the center of this belt, is a high policy priority.

Consumption tax increase is the premise for confidence in Japanese government bonds, and we should not look lightly upon fiscal reformation.  By asking the people to have faith in the dissolution of the House of Representatives and the simultaneous elections for both the House of Councilors and the House of Representatives, it is perhaps a politician’s instinct and ambition to secure a large stable majority in both Houses and then go on to fight for constitutional revisions that no one had been able to do before. We therefore cannot ignore the possibility of an “Abe-Trump Show” in which, with the strong support of President Trump, PM Abe throws in everything he has in order to secure a major win. 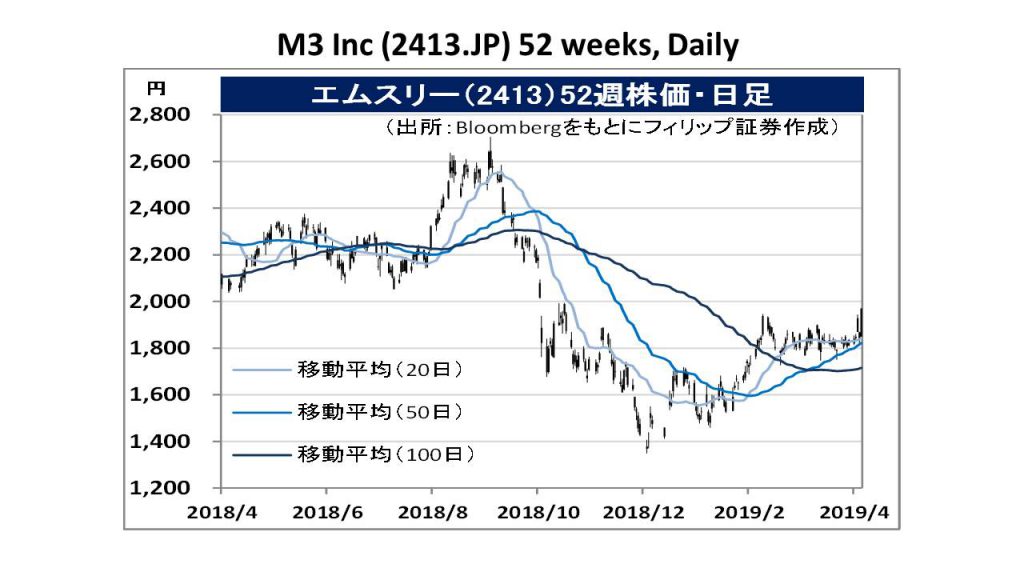 ・Established in 2000. Providing a variety of services centering on platforms for healthcare professionals such as “m3.com”, used by more than 250,000 doctors as members in Japan, “MDLinx” in the US, and “Doctors.net.uk” in the UK. Also provides outplacement support specific to the medical industry.  Developing business in more than 10 countries worldwide.

・For FY2019/3 results announced on 24/4, sales revenue increased by 19.7% to 113.059 billion yen compared to the same period the previous year, operating income increased by 12.1% to 30.8 billion yen, and current income increased by 9.4% to 21.414 billion yen. Career Solutions had increased owing to strong steady inflow of doctors and pharmacists.  Temporary profits from reorganization of group companies have also contributed to increase in profits. 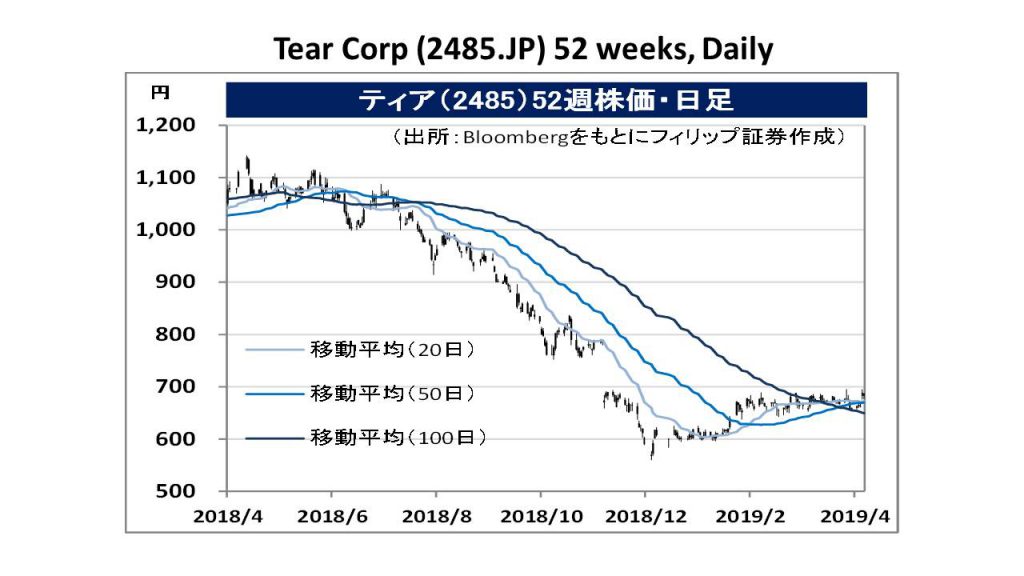 ・Established in 1997. Conducts funeral business centering on funeral services including funeral consultation and a membership “Tear Club”. Also has a franchise business franchising the “Tear Funeral Hall” management to companies in other business sectors.

・For 1Q (Oct-Dec) results of FY2019/9 announced on 7/2, net sales increased by 8.2% to 3.266 billion yen compared to the same period the previous year, operating income increased by 17.6% to 461 million yen, and net income increased by 16.3% to 308 million yen, showing increase in both income and profits. Absorbed increase in SG&A expenses by increasing directly-managed stores, and decreasing sales-cost ratio by reviewing product content and having in-house production of funeral incidental services.