Japan-Weekly Strategy Report Pessimism from the Novel Coronavirus vs Bright Spots from US Corporate Earnings and 5G February 7, 2020 207 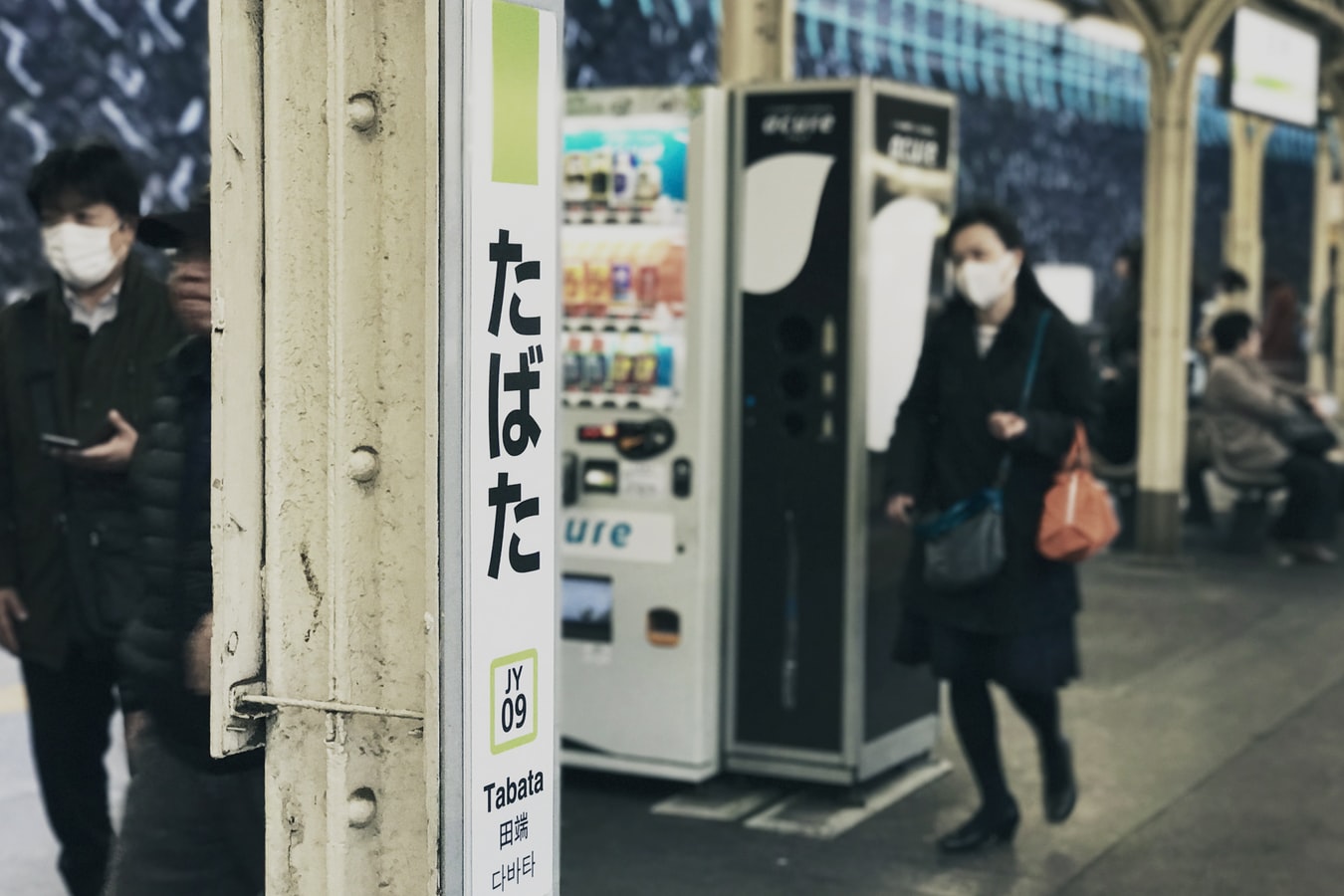 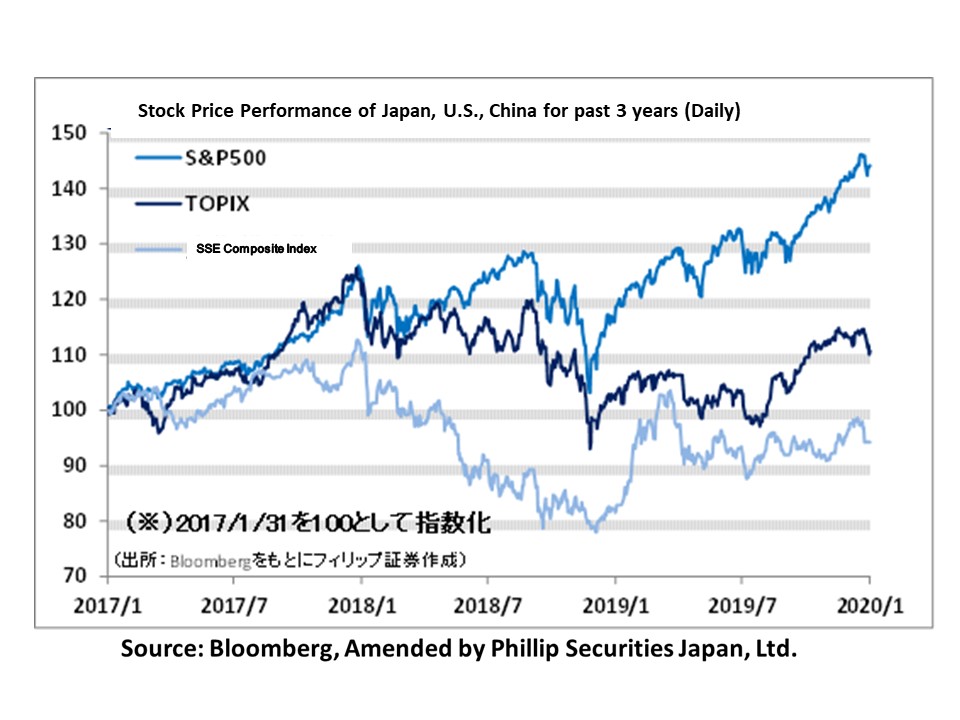 With reports that the number of people infected with the new type pneumonia had exceeded that from SARS, and in the wake of rising concerns over the WHO meeting on 30/1 on an “Emergency Declaration”, the Japanese market during the week of 27/1 experienced a downtrend for the Nikkei Average. On the other hand, as the announcements of financial results in both the US and Japan for the 2019/10-12 period progress, the US has continued to perform well, led by FAANG stocks. Apple (AAPL), Microsoft (MFST), Alphabet (GOOG), followed by Amazon.com (AMZN) each topped market capitalization of one trillion dollars.  Apple achieved a hit with its iPhone 11, released last autumn, which has a wide-angle lens capable of capturing a wider area. In the process, Japanese companies such as Sony (6758) which had been supplying CMOS sensors had benefited.  Meanwhile, Amazon.com has announced that its Amazon Prime membership has risen from 100 million in 2018/4 to more than 150 million. In Japan, supermarket-chain Life Corporation (8194) has begun offering a service to deliver fresh foods and delicatessens through “Prime NOW” to Amazon Prime members in a minimum of two hours from ordering. Such activities are reminiscent of similar developments in the US such as Whole Foods Market, which became an Amazon affiliate. In addition, similar to what Netflix (NLFX) is doing, Amazon Prime Video is also focusing on producing original programs using huge budgets in an effort to pull viewers away from TV. It is therefore clear that the influence of FAANG companies is steadily penetrating both Japanese companies and consumers.

Xilinx (XLNX) announced on 28/1 that its FY2020/1-3 results might see a reduction in revenue due to a slowdown in 5G-related demand.  As a result, stocks which had enjoyed buying activities through market focus on 5G-related demand began to be sold off after 29/1.  With 5G demand outlook likely to remain the dominant market focus, China’s Huawei announced that it had shipped more than 6.9 million 5G smartphones worldwide in 2019. Meanwhile, Korea has already launched 5G commercial services ahead of the rest of the world in 2019/4.  At the same time, Samsung Electronics has also begun focusing on sales of 5G-comptaible smartphones. Xinlinx’s 5G demand slowdown is likely due to export restrictions on Huawei imposed by the US government.

As of this moment, major US companies have generally performed well.  After this cycle of individual company reports, we do not expect to see many other factors that can push up US stocks.  The Nikkei Average had stayed within a plus-minus 600 points range from 23,600 points, which had been the line of resistance until 2019/11-12. The immediate focus is to see whether the low of 22,726 points recorded on 21/11 can be maintained. ・Osaka Pharmaceutical, established in 1897, was its predecessor. Merged with Sumitomo Pharmaceuticals in 2005/10, with Sumitomo Chemical (4005) as the parent company holding 51.6%.  North America constitutes more than 50% of the sales revenue. Focusing on anti-psychotics, anti-cancer and regenerative cells.

・For 3Q (Apr-Dec) results of FY2020/3 announced on 30/1, revenue increased by 2.9% to 357.017 billion yen compared to the same period the previous year, and core operating profit excluding non-recurring items from operating profit increased by 15.0% to 64.254 billion yen.  Overseas businesses contributed to core segment profits, despite 13.2% decline for Japan, with mainstay North America and China increasing by 9.4% and 40.4% respectively.

・For its full year plan, revenue is expected to remain as per previous forecast, increasing by 3.4% to 475.0 billion yen compared to the previous year, and core operating profit is adjusted downwards from 77.0 billion yen to 64.0 billion yen (decreasing by 17.2% compared to the previous year).  Company expects the SG&A and R&D expenses of Sumitovant, which it had acquired in conjunction with its strategic alliance with Roivant Sciences of the UK, to increase. With the move by Mitsubishi Chemical HDS (4188) to make Mitsubishi Tanabe Pharma (4508) a wholly-owned subsidiary, we can expect company to lift parent-child listing with its competitor Sumitomo Chemical. 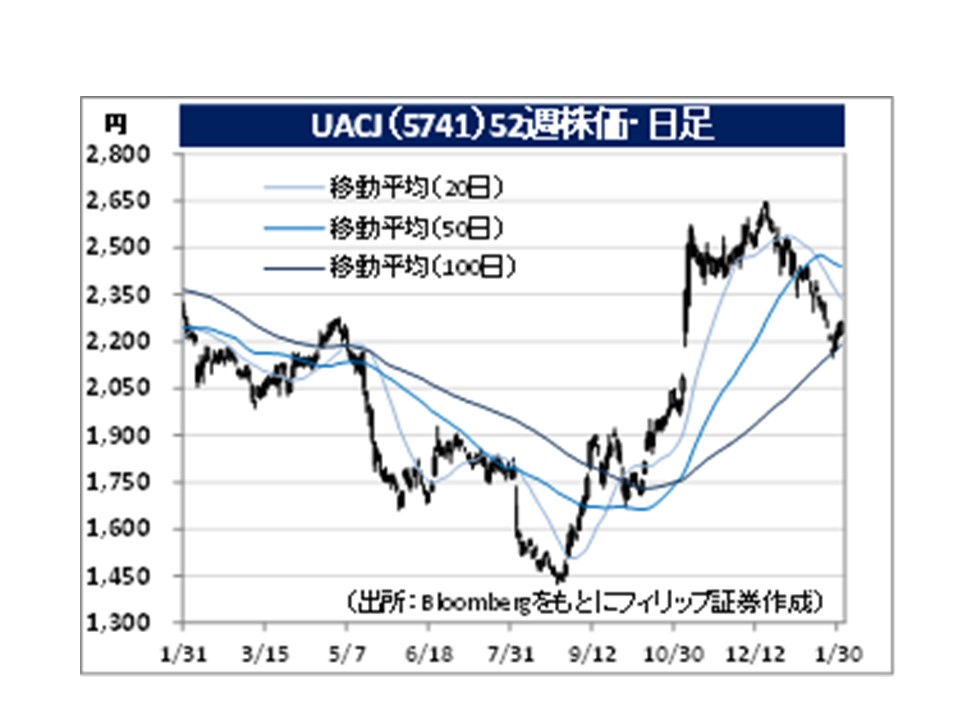 ・Formed in 2013 with the merger of operations of Furukawa-Sky and Sumitomo Light Metal Industries. Furukawa Electric (5801) is the largest shareholder with a 24.9% stake. Has the highest rolled aluminum production capacity in Japan, and third in the world after Alcoa and Novelis in the US.

・For its full year plan, net sales is expected to increase by 1.3% to 670.0 billion yen compared to the previous year, and operating income to decrease by 32.7% to 10.0 billion yen.  In response to the trend to move away from the use of plastics, and as a result of increasing attention on aluminum cans that can be easily recycled, company expects sales volume of aluminum can materials in North America to increase by 30% from that in FY2018 during FY2020.   Ordinary P&L of its Thai subsidiary engaging in aluminum sheet business is expected to turn positive in FY2021/3.  Attracting attention as a low PBR stock.